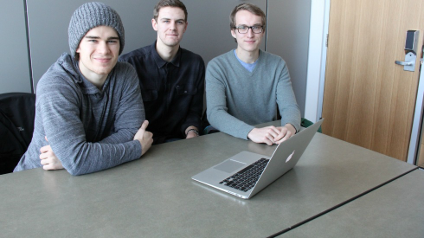 Students Tyler Hrynyk, Darian van Paridon and John Grey are part of a contingent of AlbertaSat team members making presentations at a symposium organized by the Canadian Space Commerce Association.

The team building Alberta's first satellite are mixing with the big names in space exploration. 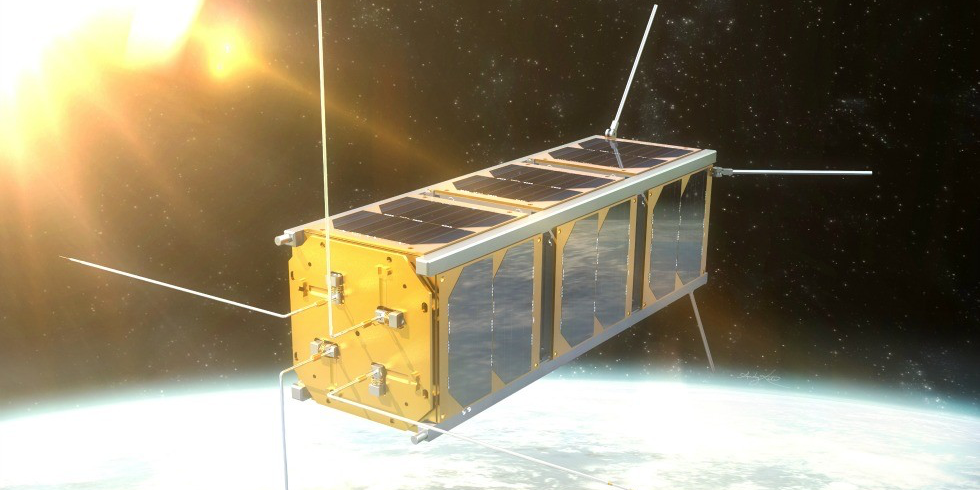 Six student members of the AlbertaSat team are at a space industry symposium this week delivering presentations about their satellite, Ex-Alta1, scheduled for launch in July.

A team of University of Alberta students designing and building Alberta’s first satellite are playing a big role in a space industry symposium this week, rubbing shoulders with government, corporate and academic leaders.

Six student members of the AlbertaSat team will be delivering presentations about their satellite, Ex-Alta1, scheduled for launch in July. They’ll also take the opportunity to network, strengthening connections with partners and building new relationships. The team is looking years beyond this summer’s launch—hoping to spark an aerospace industry in the province.

“This symposium is important because we want to get our team’s name out there and draw the eye of industry and corporate sponsors to Alberta to help build an industry here,” said team member Tyler Hrynyk, a third-year mechanical engineering student.

“We want to make sure that our next step takes us toward something much larger,” said Hrynyk, adding that the team could add strength to the province’s resource industries.

“The next step for us will be to start to include corporate partners,” said Grey. “We could do things like use satellites to study pine beetles or look at climate change and ice cover.”

Professor Ian Mann, lead academic adviser for the AlbertaSat team and former Canada Research Chair in Space Physics at the U of A, says the private space industry is undergoing huge expansion—aiming to provide services in everything from communications and imaging, to environment and climate monitoring, and even Arctic sovereignty and security. And the U of A student team is a key part of that growth.

“The student presentations highlight the new space research capacity at the University of Alberta. They will showcase not only the first ever made-in-Alberta satellite, but also the development of an ‘open-source’ satellite which opens new doors for low-cost access to space,” Mann said. “Our goal at the University of Alberta is to provide education and research which ensure our students secure well-paid jobs in the new space economy—creating economic prosperity and space-based services for Canadians, and indeed the world, in the new 21st-century space race.”

Canada has the fifth-largest aerospace industry in the world, generating $22 billion in annual revenues, employing a workforce of 66,000 and exporting 80 per cent of its output. Aerospace is the second most research-intensive industry in Canada. The civil aerospace market is predicted to be worth $4.5 trillion per year globally by 2031.

Cube satellites like Ex-Alta1 are one area experiencing tremendous growth: In 2014 more cube satellites were sent into orbit than all the other previous years since their first launch in 2003 combined.

Organized by the Canadian Space Commerce Association, the symposium’s speaker list reads like a Who’s Who of the emerging space industry, including Sylvain Laporte, president of the Canadian Space Agency; Wade Larson, CEO of Earth observation firm Urthecast; and Greg Wyler, founder of the microsatellite/communications firm OneWeb.

Hrynyk says he’ll definitely connect with representatives from the space firm NanoRacks, which builds the device that will eventually release the U of A satellite from the International Space Station. “And if I can get a chance to meet with the president of the Canadian Space Agency and the industry minister, those would be great connections too,” he said.

In the immediate future, the team is putting final touches on a cube satellite designed to collect data about the ionosphere, radiation and magnetic fields as part of an international project called QB50. The project is being run by the European Commission to simultaneously launch 50 cube satellites built by university students from 28 countries into the Earth’s lower thermosphere.

Funding support for the project came through a crowdfunding campaign and from the Canadian Space Agency.

Another key goal of the project is inspiring the next generation of space engineers, scientists and entrepreneurs.

Darian van Paridon, a third-year engineering physics student, says getting young Albertans excited about space is part of the project. The team is working closely with elementary and high-school students as part of education outreach initiative that generates more interest in aerospace technologies.

“AlbertaSat is about breaking down the doors for a space industry in Alberta,” he said, “and that also means having a new generation of people coming up.”