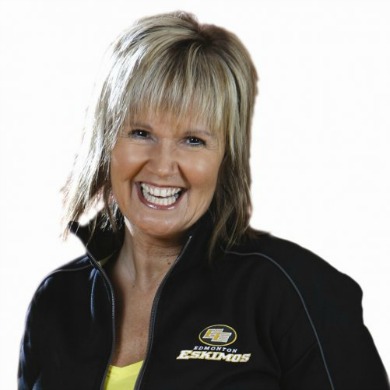 120917-alumni-diannegreenough-banner
Dianne Greenough says her UAlberta professors inspired her as a teacher and mentor.

(Edmonton) When Dianne Greenough graduated from the University of Alberta in 1978, she dreamed of coaching Team Canada to a women’s volleyball world championship.

Indeed, her teams did triumph at the worlds and every other competitive stage—but in cheerleading, a sport for which Greenough is synonymous with pioneer and visionary. Her talents as a teacher, mentor and, well, cheerleading cheerleader, will be recognized Thursday when she receives the U of A’s Alumni Honour Award during Alumni Weekend.

“I’m honoured and flattered to receive the award. I loved the training I got at the University of Alberta and it really stimulated my career,” said Greenough (‘78 B.Ed.). “It inspired me and the journey I’ve gone on. I had wonderful professors who helped me fine-tune my teaching skills.”

Greenough has used those teaching skills to school thousands of inner-city children in the art of acrobatic cheerleading at Victoria School of Arts in Edmonton, and later through her role as head coach of the Edmonton Eskimo Cheer Team and her own company, Perfect Storm Athletics.

Her teams have won more than 200 cheerleading trophies, including 24 provincial titles and 26 city championships. This past April, she coached Team Canada to a gold medal at the World Cheerleading Championships, and her Perfect Storm team placed fourth in the world in the all-star gym open level six division.

Greenough’s success, like the sport itself, started rather humbly in her early days at Vic when she tried to coach girls’ volleyball. The kids, however, were far more interested in learning dance moves than a volleyball dig.

So Greenough, who was a ballet dancer until high school when she decided to turn her attention to coaching, started a dance club. Operating on a shoestring budget, Greenough made their first costumes herself, crafting pom-poms using white trash bags. It was during a dance competition in Anaheim, Calif., that she saw acrobatic cheerleading for the first time and saw it as a vehicle to inspire and challenge her students.

She has never looked back, and has made it her mission as a teacher to help students respect and appreciate themselves through cheerleading. All it took was a gym and some mats.

“I saw this as a great vehicle to help young students. Cheerleading has always been a vehicle to teach life skills,” Greenough said. “It’s a sport where you’re interdependent on every single member of the team. Trust is a huge part, and commitment has to be 100 per cent.”

In 1980, Greenough pushed the Alberta Schools' Athletic Association to recognize acrobatic cheerleading as an official sport. She’s also been credited for planting the seeds of the sport’s popularity in Edmonton, in Alberta and beyond. Today, cheerleading is a popular global co-ed sport—and Greenough continues to teach students ranging in age from three to 30.

“Being able to bring back cheer for the kids and watch it grow throughout the city, province and country was something that was really exciting for me, and it was a great way to help young kids enjoy school,” Greenough said. “I love working with the kids. I love providing something for young people. That’s what I’m most proud of.”