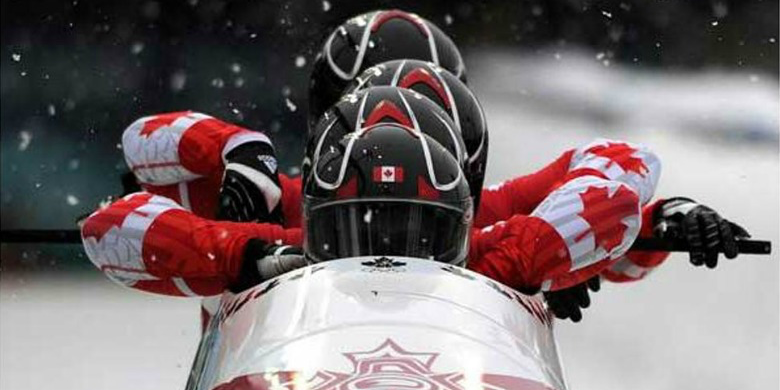 David Bissett hopes to push the Canadian Olympic bobsleigh team to the podium in Sochi next month.

(Edmonton) A trio of Golden Bears and Pandas alumni racing for bobsleigh gold at the 2014 Winter Olympics in Sochi, Russia, will be joined by an alumnus who is taking the next step in an up-and-coming career as a hockey referee.

David Bissett, Jennifer Ciochetti and Neville Wright were all nominated in December by Bobsleigh Canada Skeleton to represent Canada in Sochi in February. Chris Carlson, an alumnus of the Faculty of Physical Education and Recreation and referee in the Western and American hockey leagues, is headed overseas to officiate men’s hockey during the Olympics.

“I think it would be awesome to represent my country,” said Ciochetti, who just missed out on competing in 2010 in Vancouver and served as a spare. “It’s an exciting prospect. It’s such a big event.”

Although the official Olympic team won’t be named until the middle of January, barring serious injury, all three should be making the trip.

Bissett: In it to win it

As far as Bissett is concerned, he is making the trip to Sochi for one reason only.

It was Bissett, a former running back and kick returner for the University of Alberta Golden Bears football team from 2002 to 2005, who won bronze in the four-man bobsleigh in Vancouver in 2010, helping push pilot Lyndon Rush to the podium. He also competed in the two-man event in 2010, finishing 15th.

Vancouver was supposed to be Bissett’s last stop in his bobsledding career, having first competed in the 2006 Olympics in Torino, Italy, then racking up 11 podium finishes between 2007 and 2009, including four first-place finishes on the world stage. But something inside Bissett wasn’t quite ready to settle for a bronze medal.

“I was planning on being done,” said Bissett, who holds fourth place on the Bears’ list of longest touchdown runs from the line of scrimmage with a 75-yard scamper.

“I was going to move on with life, because you don't make very much money bobsledding, but there was the bitter taste of not winning, and the team convinced me to come back. They didn’t have to try that hard.”

Bissett, who also competed with the Golden Bears track and field program, says his time at the University of Alberta helped him learn to compete at a higher level.

“It was competing, learning how to compete,” said Bissett, who credits his time working with Quin Sekulich, a former sprint coach for the University of Alberta track program and the former strength and conditioning coach for the Golden Bears football team, with getting him started in bobsleigh. Sekulich now serves as the strength and conditioning coach for BCS, where he and Bissett are still working together.

“He’s been my coach since I started at the U of A,” Bissett said.

Ciochetti: Pilot with a golden touch

Sekulich also had a hand in getting both Wright and Ciochetti interested in the sport of bobsleigh. Ciochetti went on to win gold at the 2012 World Championships at Lake Placid.

Ciochetti ran sprints with the Pandas track team in 2006. She also ran with the U of A’s 4X200-metre relay team, which captured a Canada West gold medal and a CIS gold medal.

“The University of Alberta was fun. It’s fun to be on a sports team when you are in university,” said Ciochetti, who recently made the move from serving as a brakeman in bobsleigh to pilot, where she’s been driving her way to an Olympic berth. “It was the right kind of training [at the University of Alberta] that led me to be successful in bobsleigh. It transferred over to a new sport.”

Wright has also leapt into a new spot in bobsleigh, having made a switch from serving as a brakeman to pushing on the left side in the four-man about a month ago.

“My whole career has been on the brakes. About a month ago I switched over to the left side, which is a more technical position, so I’m just basically trying to piece everything together.”

Wright, a graduate of the Faculty of Physical Education and Recreation, ran for the U of A track team from 2003 to 2007. Once a Canada West record holder in the 60-metre sprint, Wright won gold in the 2005 national championships, won bronze in the 2007 University Games and ran in the 4x100-metre relay in the 2007 IAAF World Championships.

He took up bobsleigh after he failed to qualify for the 2008 Summer Olympics in Beijing, and Sekulich suggested he try a camp that was being offered. He went on to push for Canada in Vancouver at the 2010 Olympics, where he and his four-man team finished fifth.

“Starting at the U of A was where I first started competing at a higher level,” Wright said of his time as a Golden Bear. “It allowed me to get that exposure to try and travel around and compete against other people, which led me to compete on Team Canada for track.”

He is also looking forward to the Sochi Games.

“I think it’s an awesome experience, a great opportunity to represent my country, and I’m going to try and do my best.”