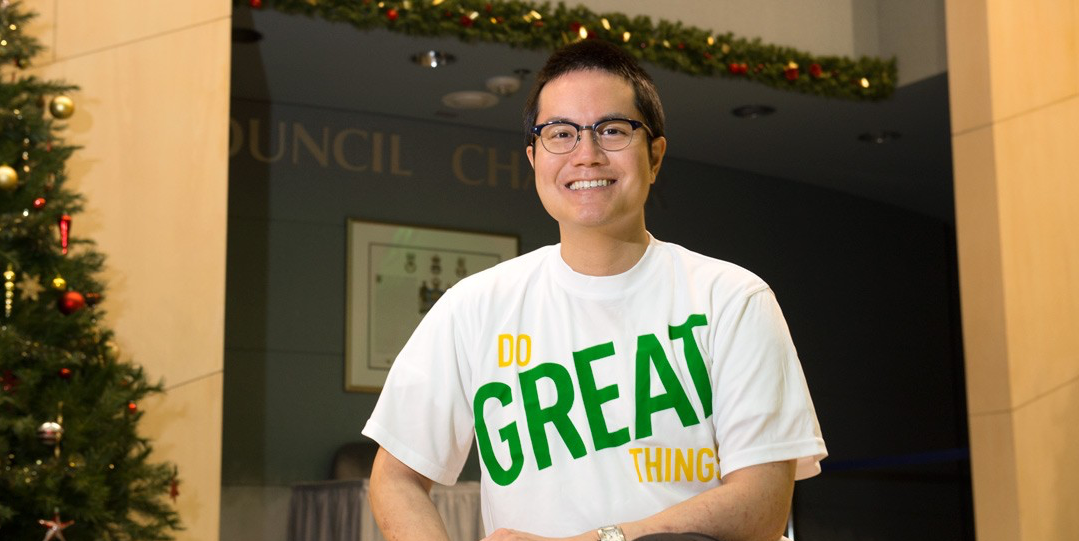 Christopher Lui, '07 BCom, '13 MBA, is one of more than 2,300 UAlberta alumni who have risen to the 'Do Great Things' volunteer challenge. “The U of A does a lot of great work," he says, "and we need to showcase how the U of A contributes to Edmonton.” (Photo: Richard Siemens)

(Edmonton) A call to action for University of Alberta alumni, based on the long-ago words of the university’s first president, has been met with overwhelming volunteerism.

Almost 1,000 U of A graduates met the first part of a ‘Do Great Things’ challenge issued by the U of A Alumni Association in spring of 2013 to volunteer on campus and beyond. Together, they soared past the challenge to log 2,015 acts of service by the beginning of 2015, meeting the goal a full year early in January 2014.

The fun, three-part challenge—issued in the lead-up to celebrating the Alumni Association’s 100th anniversary next May—is built on the optimistic words reportedly shared by the U of A’s founding president, Henry Marshall Tory, during a visit to Alberta with his wife in 1907.

Tory, who would head the U of A when it opened in 1908, reportedly told his wife that “great things are about to happen.”

The Alumni Association was formed May 15, 1915, with the mandate to maintain ties to campus and serve the community in any way they could as U of A grads.

“Ties to campus and community service were important to them, and with the centenary approaching, we were looking for a way to honour our history of volunteerism,” said Kyla Amrhein, volunteer co-ordinator with the U of A’s Office of Advancement.

“We thought, ‘Do Great Things’ would be perfect. It includes any act of campus volunteerism, from doing space research to handing out snacks to students during exam times.”

More than 2,000 alumni have since gone on to complete the second part of the challenge: to have 2,015 individuals volunteer by the beginning of 2015. That was achieved by the time Alumni Weekend was held this past September, when 2,358 volunteers logged acts of service.

Christopher Lui, 31, was one of hundreds of U of A volunteers who rose to the ‘Do Great Things’ challenge, and as a young alumnus, he plans to stay connected to campus.

“The U of A does a lot of great work, and we need to showcase how the U of A contributes to Edmonton.”

Lui, who graduated with a bachelor of commerce degree in 2007 and followed it up with an MBA in 2013, volunteers each fall at Alumni Weekend, mixing with other, older graduates who, he believes, have lots of life experience to share.

“I enjoy connecting with people and learning their stories and what their university experience was. I’m enriched in listening to their challenges and struggles, and learning from that. Their advice is really valuable.”

In turn, Lui also tries to pass along his own experience to prospective U of A students, whom he sees as tomorrow’s alumni. His volunteer work includes connecting with high-schoolers at the U of A Open House each fall, which also lets him use his career skills (he works in human resources for the City of Edmonton) and help make the U of A a good experience for first-timers.

“Sharing your own experiences and providing a friendly face is just as important as sending them to a website,” Lui said.

“I want to let them know their degrees don’t end when they are done here. They are part of the university family. Who knows—they may come back for more schooling, like I did.”

As 2014 draws to a close, the Alumni Association is looking to the final part of the centenary challenge: to collect 2,015 volunteer experiences in the year 2015.

“We are thrilled with the support we’ve had from graduates, the campus community and faculty, and I don’t see it slowing down,” said Amrhein. “Grads are giving back every single day, and we just have to identify it and celebrate it.”

Alumni have been busy with volunteer duties ranging from speaking at Career and Placement Services forums or hosting U School on campus, to picking up litter in the river valley and building homes for Habitat for Humanity in Edmonton, to cleaning up shorelines in Vancouver.

For the final 2015 challenge, alumni have plenty of opportunity to help reach the goal, Amrhein added. “We are excited about all the coming programs. Somewhere on campus there`s a perfect position for someone who wants to volunteer.”

Among the first events to kick off the new year is the Green & Glow Winterfest; alumni are welcome to volunteer for a weekend of winter fun Jan. 29–31.

Other alumni events that will need volunteers in 2015 include the Easter Eggstravaganza on April 4 and Alumni Weekend Sept. 24–27.

For more information on volunteering, email alumni.volunteers@ualberta.ca or call 780-492-4382.