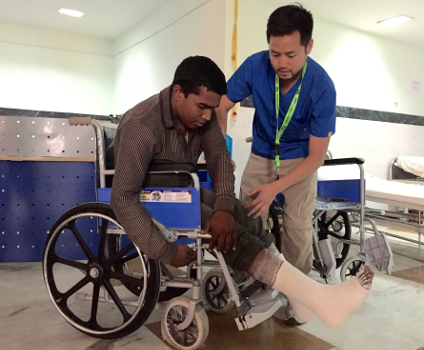 Justin Chan trains an earthquake victim to use a wheelchair in Kathmandu, Nepal.
“

I felt like I would be doing myself a disservice by not going. I knew I could help people.

Alumnus comes to aid of earthquake victims in Nepal 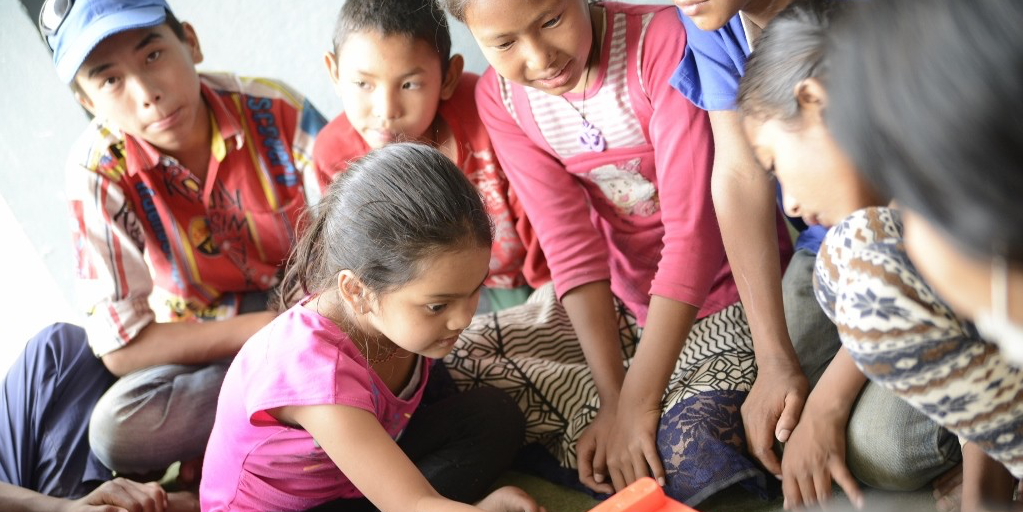 (Edmonton) It was supposed to be the adventure of a lifetime, a gruelling 16-day trek near the top of the world, to Mount Everest Base Camp.

Justin Chan had spent three months training for his trip to Nepal when, 10 days before his flight, disaster struck. The country was devastated by a magnitude 7.9 earthquake that levelled communities and killed more than 8,000 people.

Chan went anyway. Instead of mountain vistas, he was surrounded by patients in need of rehabilitation for crush injuries, fractures and bedsores.

“I felt like I would be doing myself a disservice by not going. I knew I could help people. It just made sense to me,” said Chan, a University of Alberta alumnus (‘02 BScOT) and now a Seattle-based occupational therapist.

Shortly after the first quake, Chan, originally from Calgary, made arrangements through a Canadian charity to volunteer at a Kathmandu hospital, but eventually found a placement across the street at the main trauma centre, where the need was far greater. He is part of an eight-person team of health professionals with Handicap International, a not-for-profit agency that is the rehabilitation equivalent of Doctors Without Borders.

Chan, 35, brings considerable experience to the table after working as a travelling occupational therapist throughout the United States, in major hospitals, in a Boeing factory treating injured workers and, more recently, in home care.

His days are spent treating 10 to 14 patients a day who have received acute care but now require rehabilitation for crush and spinal injuries, and fractures from jumping off buildings. They’re also training patients and their families how to apply binders and back braces, and teaching people how to walk, climb stairs or use wheelchairs. In the past week or so, their attention has turned to pressure sores.

“We teach them how to turn them properly, and it’s already been an achievement for us. We’ve walked in assuming we have to turn the patients, but the family member has already done it so that nurses can change bandages.”

Chan can’t imagine how patients would fare without relief organizations like Handicap International.

“They basically have three therapists—one at the main trauma centre and two at the general hospital. They have minimal funding for discharging patients with walkers and crutches and back braces. If it wasn’t for Handicap International, I don’t think they’d be prepared at all.”

This isn’t the first time Chan has volunteered his time treating earthquake victims. He was in Haiti after a major earthquake struck in 2010 and volunteered at an orphanage, helping children walk again after crush injuries and amputations.

“He is courageous, kind and giving, and people have always been comfortable in his presence,” says Lough, pointing out that her brother made the journey from Seattle to Kathmandu with a hockey bag jammed with toys and treats for kids in the disaster area. “I think he has definitely helped to lift the spirits of people there.”

Lough is proud, but still worries for her brother’s safety. Chan was working in Bir hospital on the top floor helping with a patient when the second, magnitude 7.3 earthquake struck on May 12.

“I was just sitting there and the building just started shaking—it was longer than the usual two-second aftershock,” Chan recalls.

Chan, his colleagues and their patients made their way out of the building and to safety in a nearby empty field—the safest place to be, he says.

“Traffic stopped. There was no noise, which was really abnormal.”

The city continues to experience two to three aftershocks a day, “which gets a little tense,” Chan adds, but he has no plans to leave before his vacation ends on May 22.

One day, he plans to follow through with his dream to hike to Everest Base Camp. But today is about something more important. If there’s one thing Haiti taught him, it’s that the recovery need doesn’t end after the first wave of relief efforts.

“I know we’re playing an important role and teaching people to manage and hopefully avoid permanent disability and get back to functions.”

Alumnus comes to aid of earthquake victims in Nepal
Newsroom