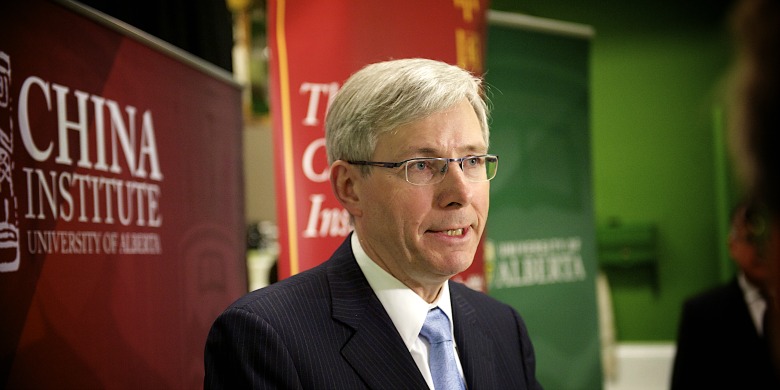 (Edmonton) With a new government taking charge of China in March, it is important for Canada to build on the positive momentum of recent months and years, said Canada’s ambassador to China, Guy Saint-Jacques, during a talk Feb. 11 at the University of Alberta—his first official visit to Western Canada since presenting his credentials to China’s president, Hu Jintao, last fall.

“As China transitions to a more sustainable model of growth and manages ties as a major global political and economic power, it will have major implications for Canadians looking to access the growing Chinese market,” Saint-Jacques told the audience.

Saint-Jacques was speaking at an event organized by the Government of Alberta and the U of A’s China Institute. The institute has been assisting with the provincial government’s plans to deepen ties with China. While introducing the ambassador, Roxanna Benoit, deputy minister of international and intergovernmental relations, said Alberta’s relationship with China is very important.

“International trade is a cornerstone to our province’s export-driven economy and will remain a key driver of Alberta’s prosperity for years to come. As the global economy continues to change, it’s crucial for Alberta to seek out opportunities in new and emerging markets around the globe in Asia and, more specifically, in China,” Benoit said.

To help explore such opportunities, the provincial government recently established an advisory council to which it named Gordon Houlden, director of the China Institute. “We’re very lucky that Gordon has agreed to serve on the council, to bring some experienced and wise counsel,” Benoit said.

The China Institute works closely with both levels of government to support their engagements with China. Recently, the Government of Alberta asked the institute to conduct a study on China’s energy sector and on how Alberta could diversify its energy exports to the country. Benoit said China is now Alberta’s second-largest trading partner.

“With advice and support from Alberta’s newly formed Asia Advisory Council and our four international offices in Greater China, the Government of Alberta is putting the tools in place that will help Alberta keep its finger to the pulse of the upcoming challenges—and opportunities—we will surely encounter as we look to expand Alberta’s access to markets in China.”

So it was welcome news when Saint-Jacques informed the audience of U of A staff and students, government officials and others that Canada is well perceived in China.

“Canada is privileged to enjoy an active relationship with China. We have an important shared interest in promoting peace, security and sustainable development regionally and globally. And we will continue to promote Canadian values and culture through principled diplomacy,” he said.

Saint-Jacques said that although the impact of China’s political leadership change next month are as yet unknown, it is certain that changes will come. For example, the ambassador said, the new leadership will focus on the country’s economy.

“Investment has been one of the main drivers of Chinese growth in recent years. The expectation is that China will continue to grow—and grow more strongly than the rest of the world—from shifting its growth model from one led by investment and export to one powered more by internal demand and consumption.”

Houlden says those demands, such as for agricultural products, would come mostly from China’s growing middle class. And Alberta is poised to meet them.

“Alberta’s high-quality food products perfectly align with the demands of Chinese consumers for protein. The safety of Alberta’s beef, for example, appeals to the Chinese, many of whom have concerns about local food safety. China’s rapidly expanding middle class is a ready market for any of our foodstuffs, and with hard work, we’re likely to see our agricultural exports to China soar.”

A strong cultural tie is also central to Canada’s relationship, with Prime Minister Stephen Harper naming education among five key areas in Canada’s new relationship with China. Saint-Jacques encouraged others to follow the U of A’s lead in this area.

“As a result of efforts invested mostly by Canadian universities, such as the U of A, the number of student permits has increased rapidly. We now have more than 67,000 Chinese students in Canada,” he said. “Over 475 active agreements between Canadian and Chinese institutions are in place, and I’m especially pleased to note the extensive links that the University of Alberta has developed with China. This is really a role model that you can be very proud of.”