An ACE in the hole for treating diabetes? 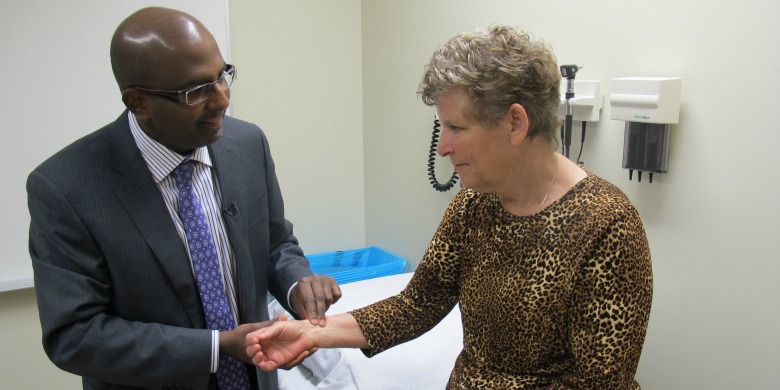 (Edmonton) Lyall Sneddon’s health rap sheet is a lengthy one.

“I’m a Type I diabetic, I have heart disease, I have kidney disease and eye disease as I’m starting to lose my eyesight,” said Sneddon. “Diabetes has really complicated my life.”

Let’s not forget breast cancer three years ago as well.

Now, Sneddon has to watch what she eats every day and is on dialysis three times a week.

“I have to learn to eat for my heart and all my diseases, and a lot of them are different, so it’s a juggling game,” said Sneddon. “You can’t drink many fluids when you’re on dialysis. So, yes, it has kind of consumed my life—but you have to keep on fighting and keep on going.

“Sometimes you want to give up, but then you stop and you think, well, you have a husband and kids and grandchildren and great-grandchildren. And you want to be there to watch them grow up, and if you give up you don’t get to see that. My children are my world.”

Sneddon is a patient of University of Alberta cardiologist Gavin Oudit, who has long been doing research on a molecule called ACE2, which he has previously shown protects the heart in cardiovascular disease. In his most recent work, published in the May 11 edition of Circulation Research, Oudit and colleagues at the University of Florida have found that lab models that lacked ACE2 had worse cardiovascular complications related to diabetes.

“We show that if you take ACE2 away, they [lab models of diabetes] do very poorly,” said Oudit. “It worsened their heart function and their vascular function. In patients, if you have high levels of ACE2 in your vascular reparative cells, you do not get diabetic complications, even if your diabetic control is very poor.”

Oudit’s related studies have also looked at another major organ affected by diabetes: the kidneys. ACE2 proved protective in these organs as well.

“Diabetes is the world’s most common cause of blindness and renal failure, so this work is very important,” he said.

The next step is to analyze human blood samples from patients in Edmonton to see the effects of ACE2 in people with diabetes. The researchers will screen the blood of both Type 1 and Type 2 diabetic patients because they think the research is relevant to both types.

Human recombinant ACE2, which is a pure form of this enzyme, is currently moving into Phase 2 clinical trials as a treatment for lung disease. The hope is that its use could then be extended as a pharmaceutical to treat patients with diabetes so they can completely avoid cardiovascular, kidney or eye disease.

It may be too late for Sneddon, but she’s hoping she can in some way be a part of the research to help Oudit succeed in his quest for complication-free diabetes. She says she doesn’t want anyone to have to go through what she’s going through.

“It’s extremely important to me because maybe it may not help me, but it’ll help other people who are healthier or about to go into the same things as I have,” said Sneddon. “To me, that’s very important if I can give back to the world.”

An ACE in the hole for treating diabetes?
Newsroom