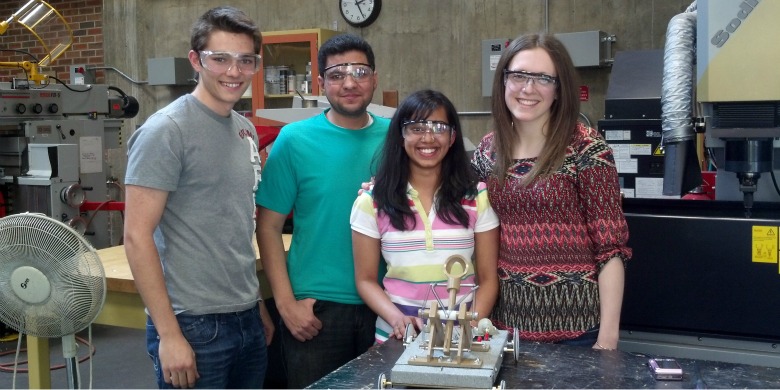 (Edmonton) Nearly a hundred second-year mechanical engineering students faced an Olympic-sized challenge Monday afternoon as they competed in the Mec E 260 Design Competition, a high-energy robotic contest that saw robots sprint, throw a ball at a target, and pull a chain down a track.

The Olympic-themed competition was the culmination of an intensive semester of sweat and long hours, in which 24 teams of students designed and built self-controlled robots for Mec E 260, a second-year mechanical engineering course that teaches the basics of engineering design and machining skills.

The purpose of the competition was to determine which team had designed and built the best robot. For one tenacious team, it was also a time to reflect on the powerful learning experiences that bloomed from a semester full of difficulties.

According to Vidhya Subramanian and Mohammad Siddiqi, members of Team Onager, from the very beginning the team was plagued with problems that included everything from multiple parts breaking to design issues. “When we started manufacturing the robot we came across several issues, each more intricate than the other. It started bringing our morale down,” said Siddiqi. “When we first tested our robot it did not even move!”

To top it all off, the morning of the competition an important worm gear on the robot’s shaft snapped off. “Unfortunately, the material the worm was made out of was too brittle, and under the vibration while launching the worm gear broke,” explained Subramanian.

“Fortunately we were able to mend it by placing a metal collar around the shaft and binding it with superglue as a temporary solution to get us through the competition,” added teammate Matthew Dearborn.

The solution worked perfectly until the final event, when the worm gear ruptured once more. Despite this, the team finished the competition in a respectable seventh place.

According to the team, they were at first quite discouraged by all the challenges, but they soon began to see them as positive learning opportunities.

“By the time the competition rolled around, our attitude was completely different. Whenever something failed, it kind of excited us within ourselves just thinking we would have to find a solution for it,” said Siddiqi. “In my personal opinion, the best aspect of the experience was not the successes we achieved, but the failures we encountered and had to overcome.”

“The perseverance through our adversities was a very rewarding experience for our group,” Dearborn agreed.

According to professor Pierre Mertiny, overcoming these sorts of challenges helps students develop the strong, hands-on design skills they need to become top-notch mechanical engineers. “Without courses like Mec E 260, the students would miss the crucial experience of how to combine and apply the material learned in engineering science courses to real engineering problems,” he said.

Student Sarah Khan, also a member of Team Onager, said she found this approach highly beneficial. “Applying our knowledge to a concrete problem instead of something just on paper was extremely valuable,” she said.

“The experience has forced us to think outside the box,” reflected Siddiqi. “When we become actual engineers, we’ll know there are so many infinite ways to approach a problem, and not just one traditional way.”