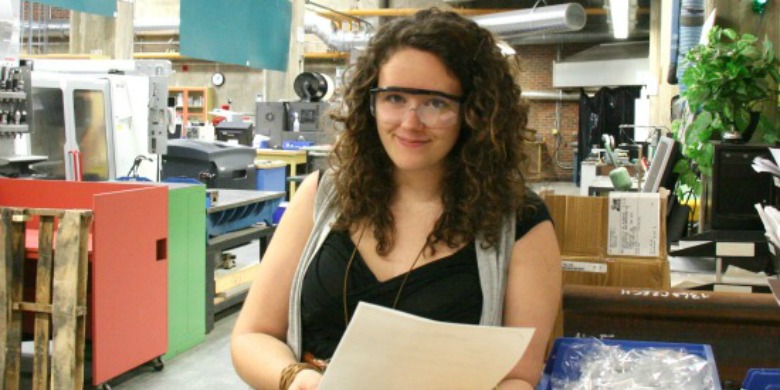 (Edmonton) Mechanical engineering student Marcy Frioult is barely able to keep her feet on the ground these days after being accepted to an international exchange project where she’ll help build and launch a sounding rocket.

“I don’t think I’ve ever been as excited to go anywhere as I am to go on this trip,” said Frioult, who joins four other U of A students travelling to the Andoya Rocket Range in Norway as part of the Canada-Norway Student Sounding Rocket (CaNoRock) exchange program January 16 – 20.

Frioult hopes to find an engineering career in the aerospace industry. And the CaNoRock experience will help. Undergraduate students from the Universities of Alberta, Calgary, Saskatchewan and Oslo will gain hands-on experience in rocket and payload instrument design. They will launch a small rocket and analyse data collected during its flight.

“It will have a huge impact on my future plans. I am really looking forward to meeting people with similar interests, and people who work in the field I am interested in,” said Frioult, a fourth-year student in the engineering co-op program.

“It offers students a unique opportunity to participate in a real rocket launch, giving them insight into the preparation process and the very intense team work required for a successful mission,” said Lange, whose own engineering design work was flown to Mars as part of NASA’s 2008 Mars Phoenix Lander mission.

“The competition serves as a strong motivator for better grades and excellence, not only to the selected students, but also to the ones that were not selected in one competition. These students know they can improve their chances in a following opportunity, because we have two competitions per year,” he added.

It’s the perfect opportunity for Frioult, who has also been conducting research with mechanical engineering professor Alidad Amirfazli since last summer in a project aimed at developing an anti-icing system for composite aircraft wings.

“My favourite part about the education I have received so far is when I started to be able to apply what I have learned to real situations. For example, in my research job, you have to be able to understand the physics behind it to understand what the data we collect means,” added Frioult. “Once you learn all of these principles and theories, you never really look at things the same way.”