An impact of this magnitude would kill everything for quite a distance. 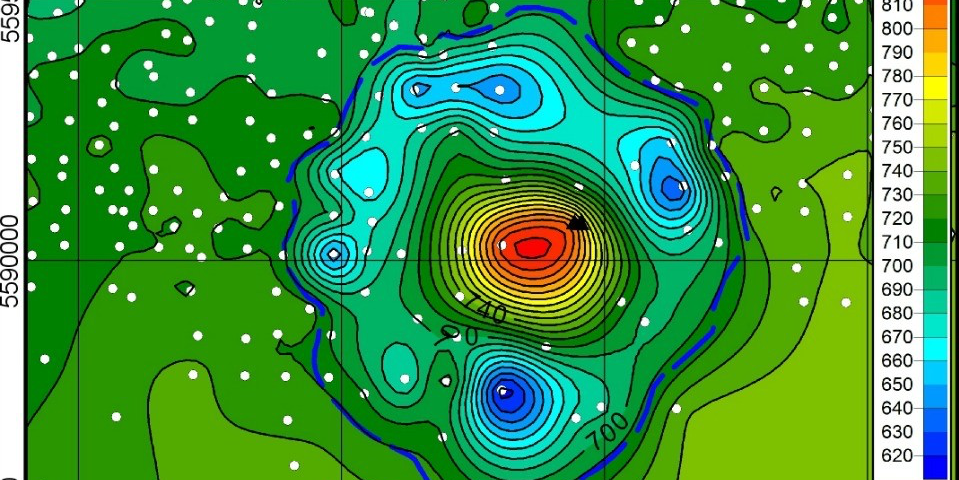 Image showing the remnants of a crater that UAlberta researchers theorize was left by a massive meteorite strike sometime in the last 70 million years. Colour variation shows metres above sea level.

(Edmonton) The discovery of an ancient ring-like structure in southern Alberta suggests the area was struck by a meteorite large enough to leave an eight-kilometre-wide crater, producing an explosion strong enough to destroy present-day Calgary, say researchers from the Alberta Geological Survey and University of Alberta.

The first hints about the impact site near the southern Alberta hamlet of Bow City were discovered by a geologist with the Alberta Geological Survey and studied by a U of A team led by Doug Schmitt, Canada Research Chair in Rock Physics.

Time and glaciers have buried and eroded much of the evidence, making it impossible at this point to say with full certainty the ring-like structure was caused by a hypervelocity meteorite impact, but that’s what seismic and geological evidence strongly suggests, said Schmitt, a professor in the Faculty of Science and co-author of a new paper about the discovery.

“We know that the impact occurred within the last 70 million years, and in that time about 1.5 km of sediment has been eroded. That makes it really hard to pin down and actually date the impact.”

Erosion has worn away all but the “roots” of the crater, leaving a semicircular depression eight kilometres across with a central peak. Schmitt says that when it formed, the crater likely reached a depth of 1.6 to 2.4 km—the kind of impact his graduate student Wei Xie calculated would have had devastating consequences for life in the area.

“An impact of this magnitude would kill everything for quite a distance,” he said. “If it happened today, Calgary (200 km to the northwest) would be completely fried and in Edmonton (500 km northwest), every window would have been blown out. Something of that size, throwing that much debris in the air, potentially would have global consequences; there could have been ramifications for decades.”

The impact site was first discovered in 2009 by geologist Paul Glombick, who at the time was working on a geological map of the area for the Alberta Geological Survey, focusing on the shallow subsurface, between zero and 500 metres in depth. Glombick relied on existing geophysical log data from the oil and gas industry when he discovered a bowl-shaped structure. After checking maps of the area dating back to the 1940s, he found evidence of faulting at the surface.

The Alberta Geological Survey contacted the U of A and Schmitt to explore further, peeking into the earth by analyzing seismic data donated by industry. Schmitt’s student, Todd Brown, later confirmed a crater-like structure.

For Glombick, who earned his bachelor's degree and PhD in geology from the U of A, contributing to such a historic find was a “pretty cool” departure from his regular duties of mapping rock and layers in the shallow subsurface.

“It’s exciting to come across a structure like this. It highlights there’s still a fair amount of unknowns in the shallow subsurface,” he said, noting the oil and gas industry’s geological interests focus deeper underground. “It’s nice to be able to contribute something to the geology of Alberta.”

The research team’s paper about the discovery was published in the journal Meteoritics & Planetary Science in an early online release.