Anthropology grad throws back to the prairie past

Archeologist Reid Graham brought a 50-year-old project back to life—and made a significant discovery—on the way to earning his master’s degree. 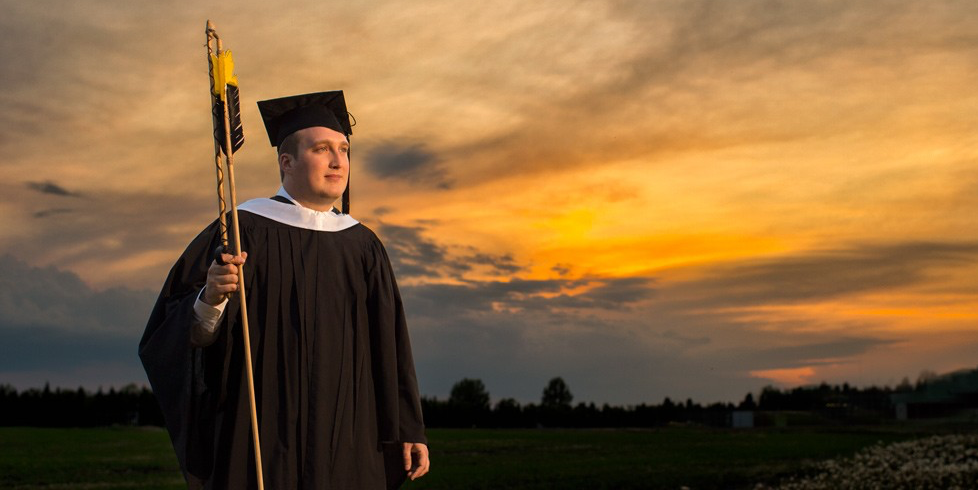 Hunting points from artifacts such as the atlatl, a spear-throwing tool that predates the bow and arrow, were found at the Muhlbach site where Reid Graham focused his research. Inspired by their design, Graham has since fashioned a few of the tools himself, including the one pictured here. (Photo: Richard Siemens)

(Edmonton) When he graduates next week from the University of Alberta, archeologist Reid Graham crosses the stage with an extra sense of accomplishment, having brought a 50 year-old project back to life.

To earn his master’s degree from the U of A Faculty of Arts, Graham blew the dust off an excavation project that was started in 1965 by a now-retired professor from the Department of Anthropology, Ruth Gruhn. His work has revealed new findings about a link between ancient peoples of Alberta and North Dakota, challenging a previously held theory. It’s given Graham, 25, a feeling of satisfaction.

“It was an honour to help finish what had been started all those years ago,” he said.

While doing an archeological survey of the province for the National Museum of Civilization 50 years ago, Gruhn and her husband Alan Bryan excavated a 1,500-year-old bison kill site—which became known as the Muhlbach site—in a Stettler-area farmyard in east central Alberta. They published a preliminary report about the found bits of stone tools and bison bones, noting that almost all of the hunting points were crafted from a single type of stone material, known as Knife River Flint. Found only at quarries near the Missouri River in North Dakota, 1,000 kilometres away, the material suggested a link between Alberta’s ancient inhabitants and those living in the Dakotas.

There the work rested, until Graham took it on as his thesis topic in 2011 at the encouragement of Jack Ives, executive director of the U of A’s Institute of Prairie Archaeology.

Growing up on a ranch in Manitoba, Graham felt connected to nature, ecology and biology. He also had a love of museums and he realized archeology could provide a career path to doing what he loves. The U of A’s archeology program offered what he wanted for graduate studies.

Taking up where Gruhn left off decades ago, Graham used GIS mapping to piece together a reconstruction of the bison kill site. He discovered new information about the bison bones and tools by digitizing old maps of the bone bed to figure out the kill site and identify areas that were likely used for butchering and cleaning the meat. Spatial analysis also revealed how hunters drove bison to the kill site. “I wanted to reconstruct as much as possible from what we have.”

Graham’s graduate work with the Muhlbach site also led to his investigation of a related site in South Dakota, where excavation in the 1960s by a Smithsonian archeologist revealed a large campsite and several burial mounds on the Missouri River. At the time, it was found that the inhabitants also shared a preference for Knife River Flint, which led to a theory that the Muhlbach site represented a large-scale migration of peoples from the Dakotas to Alberta about 1,500 years ago.

But Graham’s work explaining the mixture of stone tools common to both excavation sites puts a strike against that theory, suggesting instead that the ancient peoples were likely intermarrying and trading between the two regions.

It was an exciting, significant new revelation, and as Graham sorted through the ancient mystery to write his thesis, he was grateful for the support he received from Ives, as well as assistant professor Kisha Supernant, who helped him master the GIS technology.

“They guided me through it all by doing the little things, like being available and giving feedback.”

Fellow grad students, his girlfriend among them, were also a help. “We formed a tight-knit community during my first year coming into the program and we are all still close. Because it was a small group, we would collaborate and really discuss the work we were doing. As archeologists, everyone is really passionate about what they are doing, and you feed off of that.

“In graduate studies, there’s a sense of uncertainty; you aren’t sure you can do it, so having that support network was really helpful.”

“I definitely left the U of A with a lot more confidence and passion for my field and I’ve built a network of friends here, and I continue to be inspired by it all.”

Anthropology grad throws back to the prairie past