Contrary to popular belief, consuming products from animals treated with antibiotics is not a threat to human health. 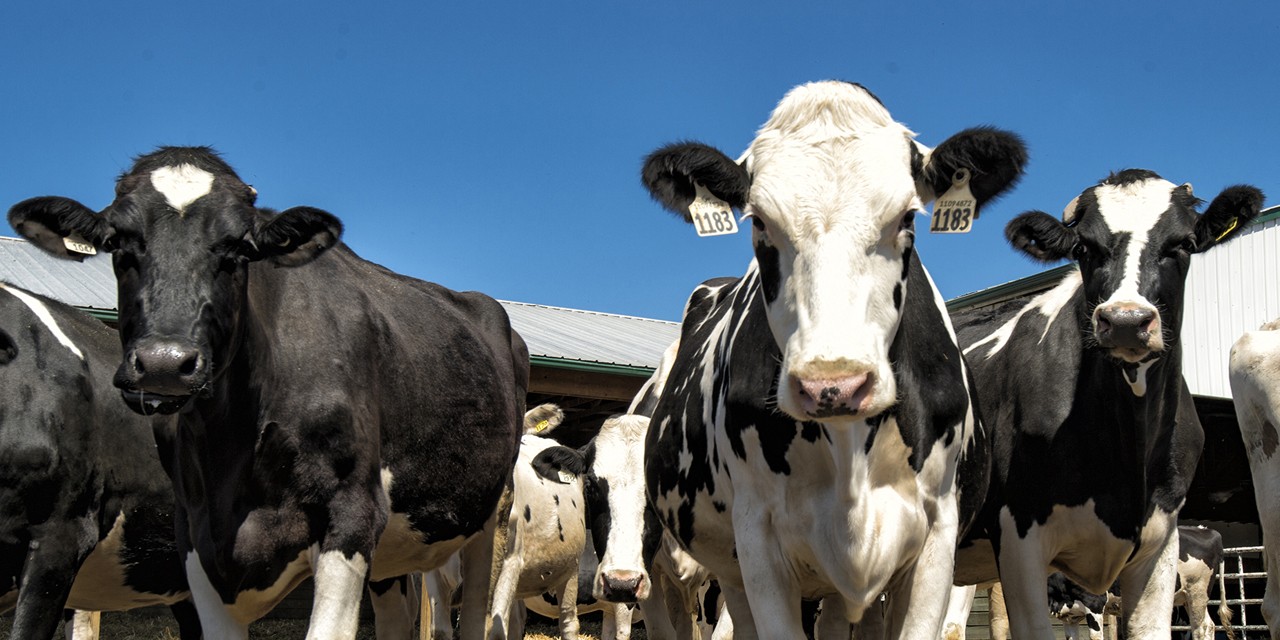 While food producers are rushing to supply a growing demand for the unclear promise of antibiotic-free meat and dairy products, consumers may not realize that the trade-off is a deterioration in animal welfare. (Photo by Richard Siemens)

Is your ‘antibiotic-free’ burger really a good thing?

Not necessarily, says a University of Alberta agri-food expert.

While companies like food giant Tyson are rushing to market their products free of antibiotics and therefore safer for humans, consumers may find it less appetizing when they realize what it means for the animal at the other end of the food chain.

“It can be a negative for animal welfare,” said Ellen Goddard, a food economist in the Faculty of Agricultural, Life and Environmental Sciences. “What happens if a dairy cow gets mastitis, or an animal gets an infected cut?”

Research conducted by Goddard jointly with the University of Bonn in Germany shows that consumers have a limited understanding of the connection between antibiotic use and livestock production.

Of the Canadians surveyed in the study, 43 per cent said they’d be willing to eat meat from an animal that had received antibiotics, but at the same time, 55 per cent said it was important that the resulting food products came from a humanely treated animal.

“We are not getting a balanced view. I’m worried that people are equating judicious use of antibiotics with zero use, and there’s a lack of understanding that zero use may not be good for animal welfare,” Goddard said. In fact, she added, the vast majority of people are eating products from animals given antibiotics over their lifespans, but may not know it.

Real threat is bacteria from overuse of antibiotics

There’s a growing belief that consuming meat, milk, cheese and other products from livestock treated with antibiotics could reduce disease-resistance in humans, but the actual threat to human health is the increasingly potent bacteria, Goddard said.

“I don’t think anything is going to happen to us because we eat meat from animals treated with antibiotics.” Industry regulations require that antibiotics be out of an animal’s system well before slaughter, she noted.

“The real problem is that with overuse of antibiotics, bacteria are constantly evolving and developing resistance to treatment. That bacteria can affect us, but not likely through properly cooked meat. It could be spread to humans through air and water, by birds and animal waste, or through an infected cut, but it’s the bacteria that is the culprit.”

Eliminating the use of antibiotics would cause unnecessary suffering for the animal, Goddard said. “We could make their lives worse or very short. Untreated animals have to be shifted out of the ‘antibiotic-free’ supply chain, which means early slaughter.” That, she added, also translates into economic loss.

It also goes against the grain of basic beliefs the public holds about how food animals should be cared for, Goddard suggested.

“There’s a public push for enhancing animal welfare and a huge sense of outrage when negative animal welfare hits the news. People are appalled. And many of us are willing to admit we don’t know how animals are cared for on the farm. We can say yes, we have no idea how livestock is kept, but it’s important that their quality of life is good. That’s the kind of person who feels strongly about how we should respect animals—whether they are the same people who demand antibiotic-free production, I don’t know, but our research is showing there is not a lot of understanding that the two are linked.”

Goddard is concerned that could translate into “standards in livestock production that might be negative for the welfare of the animals.”

Livestock producers, government and the pharmaceutical industry are currently hashing out guidelines to strike a needed balance in antibiotic use, she added. Right now producers have discretionary use and many are administering the drugs as both a widespread preventive measure against disease and in some industries, to promote growth.

“Industry could be using them more selectively in terms of how often and what kinds they use, some are critical to human health, but as with people, antibiotics need to be used for livestock when medically necessary,” said Goddard.

Educating the public should also be part of that strategy, she added.

“We need to be more transparent about the nature of livestock production and why antibiotics are used. Right now, we don’t really know what the public understands about usage.”

Adding to that confusion is a movement to use more vaccination of food animals as a way to avoid antibiotic use, she noted. That’s also clouded by uncertainty, as a percolating anti-vaccine movement raises similar doubts among consumers, Goddard noted.

“We could see a backlash in five years for vaccine-free livestock, and so both issues are something we need to talk about now with the public.”

'Antibiotic-free' meat unappetizing when it comes to animal welfare
Newsroom