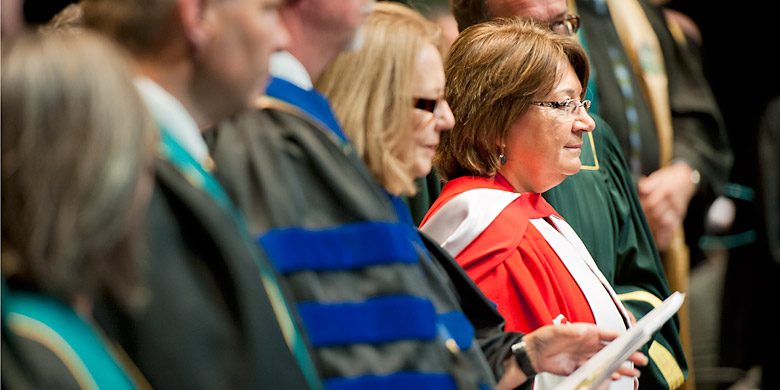 (Edmonton) Mary May Simon’s first lessons in leadership were at her grandmother’s knee, in front of a warm wood stove. Growing up in northern Quebec, Simon was deeply rooted in her Inuit culture, which gave her a foundation for a future of achievement.

Simon reflected on her past as she received an honorary doctor of laws degree from the University of Alberta June 12, noting that it bestowed values that have carried her through an accomplished career dedicated to advocating for Inuit people and Canada’s circumpolar region.

“The message I hope to leave today is the importance of the past in building the future,” she told the 2012 graduating classes from the university’s Faculty of Education and Faculty of Physical Education and Recreation.

Living a traditional lifestyle, her family hunted, fished and gathered their food, travelled by dogsled and was steeped in their Inuktitut language. “Those years were undoubtedly my first introduction to leadership and to the values that would guide me throughout my career. Those values have served me well in life. Being a leader means being a person of honesty, integrity and determination, on good days and bad,” she told her audience.

Simon’s distinguished career has been devoted to advancing sustainable and equitable development in the circumpolar region. She was a key figure in the evolution of the Inuit Tapiriit Kanatami, Canada’s national Inuit organization, and has served as its president since 2006.

Simon, who is an officer of the Order of Canada, was also the country’s first ambassador of circumpolar affairs, as well as president and special envoy of the Inuit Circumpolar Conference. As well, she played an instrumental role as a senior Inuit negotiator during the Canadian constitutional discussions of the early 1980s, which led to the recognition of Aboriginal rights in the Constitution Act.

Simon is also the founding chair of the Arctic Children and Youth Foundation, a charitable organization that advances standards of living, educational opportunities, health and well-being.

She thanked the U of A for its own work in advancing circumpolar research. “All the work [the university] has done over the years in relation to the Arctic and the university’s contribution to the work we do in the Arctic is very long and very much appreciated.”

In advising the new graduates as they move on in life, Simon told them that adversity also plays a role in leadership. “From adversity can come the gifts of compassion and resilience,” she said, adding that sacrifice and risk are also sometimes necessary.

Simon urged her young listeners to use “cross-boundary thinking” when addressing complex issues so prevalent today; in her own work, she said, that means encounters with youth suicide, child hunger and “the sad, sad fact that three-quarters of Inuit youth are not completing high school.”

During her career, in whatever role she was serving, “the so-called breakthrough moments almost always involved thinking across boundaries.”

As an example of visionary leadership and co-operation, a new national strategy for Inuit education provides “a blueprint for a new way of thinking,” Simon noted.

More students are studying at and graduating from universities across Canada, including the U of A, “and becoming our hope for the future,” she added. “It is by exceeding their own boundaries that they will make a difference in our future.”

She encouraged the new graduates to exercise their curiosity, to seek out other perspectives and, when conflict arises, to “mediate solutions.”

“Leadership means opening a space to create a community of people who support each other in a common goal.”

Simon also asked the classes of 2012 to “build on the training you have received here and use those skills to build bridges with Aboriginal Canadians.”