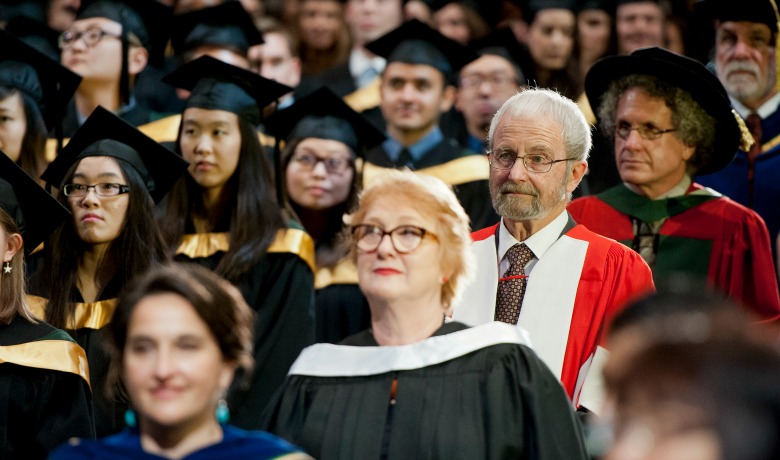 (Edmonton) Ian Stirling wasn’t quite sure what he’d got himself into when he stepped off a plane in Antarctica in 1966, as a PhD candidate studying seals.

“There I was, in a place I was completely unfamiliar with, to start a major project on a large mammal I had never seen before, using methods that had yet to be developed and coming to the realization that I was pretty much on my own to figure everything out.”

After almost 40 years as a scientist, Stirling has since become renowned for his work, and urged graduating University of Alberta science students to “press your limits to realize the potential” of their degrees, as he did on that long-ago cold day.

Stirling, an adjunct professor in the U of A’s Department of Biological Sciences, was awarded an honorary doctor of science degree June 12 in recognition of a career devoted to research and conservation of Arctic marine mammals and ecosystems.

During his career as a researcher with the Canadian Wildlife Service, Stirling became a recognized advocate concerned with consequences of climate change in the Canadian Arctic, particularly drawing attention to the plight of the polar bear. An elected fellow of the Royal Society of Canada, Stirling was also made an officer of the Order of Canada in 2000.

Joining the U of A as an adjunct professor in 1979, Stirling went beyond his role as a government scientist to supervise or co-supervise 10 master’s students, seven PhDs and two post-doctoral fellows at the U of A. The unsalaried work has been among the most satisfying in his career, he told the graduates.

“Sometimes the most valuable contributions that you can make to society are those that you undertake simply to help make this a better place, independent of remuneration.”

In their new careers, Stirling urged the graduates to discover and document truth as scientists, to “test the limits of your minds, work in other countries, collaborate with other scientists and evaluate ideas that challenge your own beliefs.”

He also encouraged the budding researchers to stand firm in their work, even if their findings are unpopular with prevailing beliefs or governments of the times.

“I encourage you to never forget the fundamental tenet that science is simply about truth and the description of order in the universe. With that approach to your chosen field, your training and your degrees will all have enormous value.”