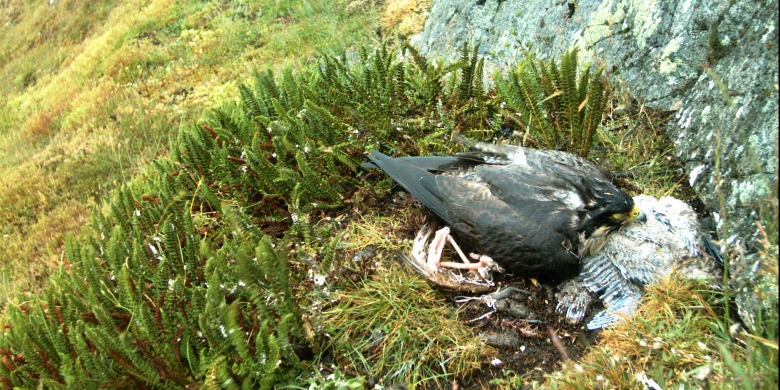 131203-peregrine-deadchicks-banner
A mother peregrine falcon tries to brood two chicks that have died from exposure to cool, wet conditions caused by heavier rainfall in the Arctic.

A University of Alberta study recently published in Oecologia shows that an increase in the frequency of heavy rain brought on by warmer summer temperatures is posing a threat not seen in this species since before pesticides such as DDT were banned from use in Canada in 1970.

The study is among the first to directly link rainfall to survival of wild birds in Canada.

A nest-box experiment at the heart of the study, co-written by U of A researcher Alastair Franke and Alexandre Anctil of the Université du Québec, has provided “unequivocal evidence” that gradual changes in Arctic temperature and precipitation are responsible for a long-term decline in reproduction for the peregrine, a top predator in the Arctic.

The change in rainfall patterns in recent years has had a big influence on the overall decline in reproductive success over the last three decades, Franke said.

Paired with historical weather data and measures of breeding success dating back to 1980, the researchers also conducted a nest-box experiment from 2008 to 2010 in a dense population of peregrines breeding near Rankin Inlet in Nunavut on the shores of the Hudson Bay. Falcon nests were monitored using motion-sensitive cameras, and images confirmed that more than one-third of the chick deaths recorded were indeed caused by rain, whether they were raised in nest boxes or on natural ledges.

“The nestlings died from hypothermia and in some cases from drowning in their flooded nests. Without constant parental care, they are most vulnerable to cold and wet conditions in the first three weeks of life.”

Over the past 30 years, scientists have been surprised to discover an ongoing decline, even when pesticide residues were known to be too low to cause reproductive failure.

“We knew DDT was no longer an issue and based on field observations, we wondered whether changes in climate were responsible for high mortality in recent years,” Franke said.

“We were surprised to find that a considerable number of nestlings raised in nest boxes later died of starvation despite having been spared from the direct effects of rain.”

Believing that storms may also be the culprit in reducing the abundance of prey for peregrines, Franke has launched a food supplementation study to explore the possible link.

Grim as the study’s findings are, “they have improved our understanding of the direct effects of long-term changes in weather patterns and have identified the potential importance of indirect effects,” Franke said.

The work also shows that wildlife can be sensitive to many different environmental pressures and that ongoing vigilance and monitoring is critical, he noted.

The study was funded by ArcticNet, the U of A’s Canadian Circumpolar Institute, the Nunavut Wildlife Management Board and Department of Environment, the Natural Sciences and Engineering Research Council of Canada, the Fonds de recherche Nature et technologies Québec and a W. Garfield Weston Award.