This is the first proposed geological boundary that will have been witnessed directly by advanced human societies. Moreover, it is one that marks the very consequences of these societies’ activities on the planet.

Arguments for the Anthropocene

Scientists contend that the pervasive and irreversible signatures of human activity on Earth’s geology warrant recognition of new epoch of Geological Time. 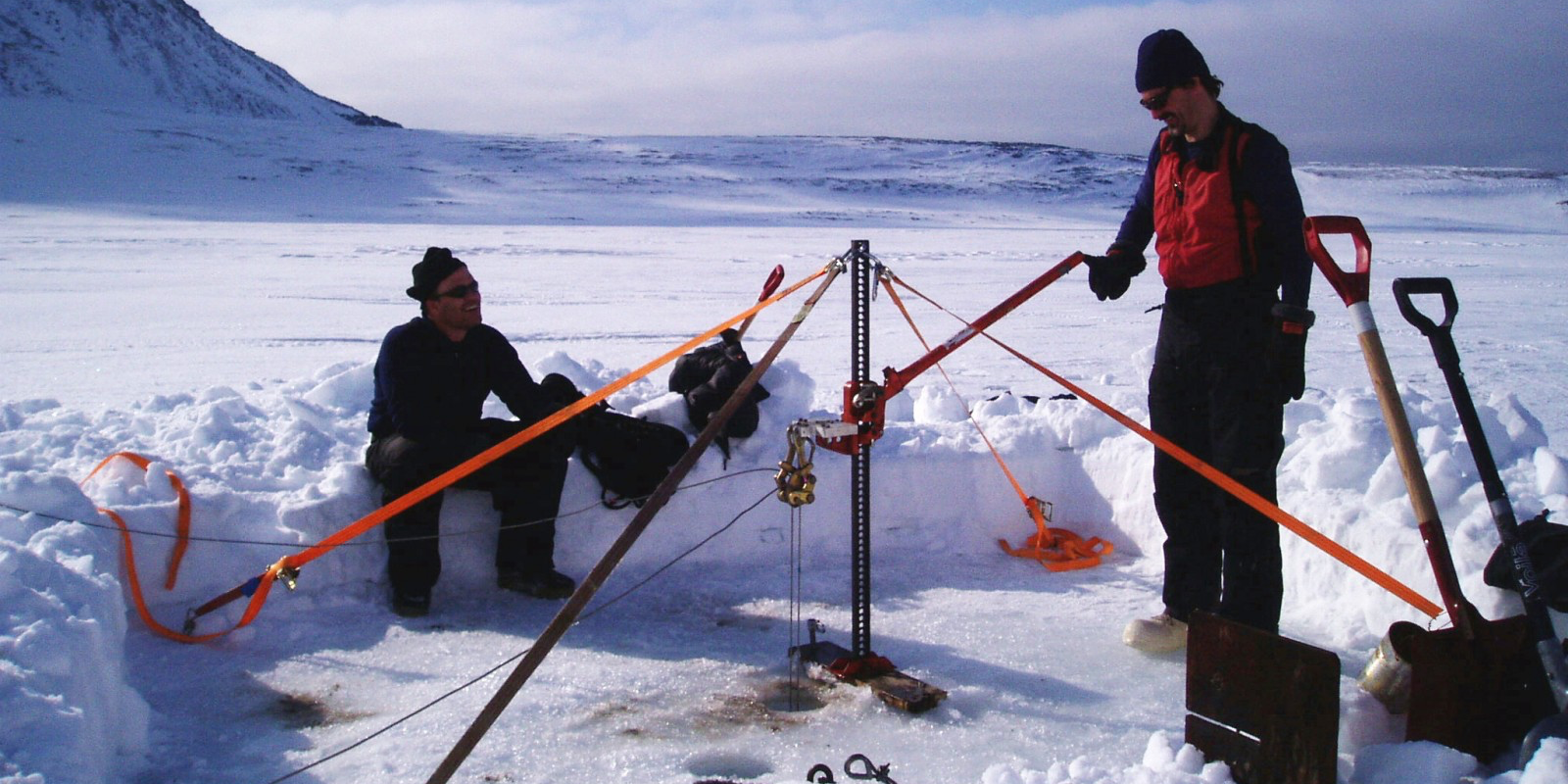 Alexander Wolfe (right) took core samples from various lakes around the world for his contribution to the study.

Characterized by the mantra “better living through chemistry,” the time immediately following the Second World War was steeped in a euphoric state of consumption of mass-manufactured materials. Following vigorous debate, scientists propose that this time should now be formally recognized as the beginning of a new epoch of geological time, the Anthropocene, based on the argument that humans have changed the Earth system significantly enough to produce distinctive stratigraphic signals that should be recognized in the Geologic Time Scale.

After reviewing the stratigraphic record of anthropogenic markers—those produced by modern human activity—an international team of scientists found that the presence of manufactured materials in sediments—including aluminum, plastics and concrete—coincides with global spikes in fallout radionuclides, particulates from fossil-fuel combustion, global atmospheric pollution and accelerated increases in greenhouse gas concentrations. This has led to a state in which the planet operates under fundamentally different boundary conditions than during the Holocene, the epoch spanning the prior 11,700 years, which served as the cradle for advanced human societies under relatively stable environmental conditions.

Alexander Wolfe, adjunct professor of biological sciences at the University of Alberta, is the sole Canadian co-author of the new study published in the journal Science. “This new paper is a major step before we provide evidence and recommendations to the gatekeepers of geological time, the International Commission on Stratigraphy, on whether the Anthropocene should be formally entered to the time scale as a new unit of Earth history beginning in the mid-20th century,” Wolfe explains, noting the move has implications well beyond the geological community.

The increasing usage of the term “Anthropocene” has been notoriously vague and typically varies from discipline to discipline, motivating the group—including not only geologists and paleobiologists, but also anthropologists, archeologists, historians and social scientists—to settle on an agreed-upon formal definition.

“We hope that such a common definition will have ramifications well beyond the arcane rules of stratigraphy,” states Wolfe, including, for example, ecology, economics, policy and the law of the sea. “In a practical sense, in the Anthropocene it can no longer be assumed that environmental conditions will be stable on generational time scales, given the wholesale changes in many key Earth parameters over recent decades.”

“This is the first proposed geological boundary that will have been witnessed directly by advanced human societies,” Wolfe continues. “Moreover, it is one that marks the very consequences of these societies’ activities on the planet.”

Though these features make the Anthopocene fundamentally different from other geological boundaries in Earth’s 4.6-billion-year history, the team is nonetheless adhering strictly to the codified methodology of formal stratigraphic nomenclature.

Wolfe’s participation in this monumental study is another landmark in the U of A’s long-standing contributions to the science of global changes. He is hopeful of the changes the findings may inspire, particularly in the acknowledgment of humanity’s appropriation of key processes at the planetary scale, for better or for worse.

"We are optimistic that this will raise awareness of the global character of human impacts on the Earth system and the way humans have and are changing the planet. Formal recognition of these changes is clearly relevant, not just to stratigraphy and geology, but also to the entire conceptualization of our collective effects on the Earth system.”

Wolfe says the evidence is clear. “Formalization of the Anthropocene may well affect policy decisions concerning environmental futures. How far can we or should we go in terms of modifying the planet, our only viable home?”

The findings, “The Anthropocene is functionally and stratigraphically distinct from the Holocene,” were published in the Jan. 8 issue of the journal Science.

Arguments for the Anthropocene
Newsroom