Around the world in 120 days: One student’s quest to bring renewable energy technology back home

U of A master’s student travels the world to learn more about how to bring geothermal technology to Canada. 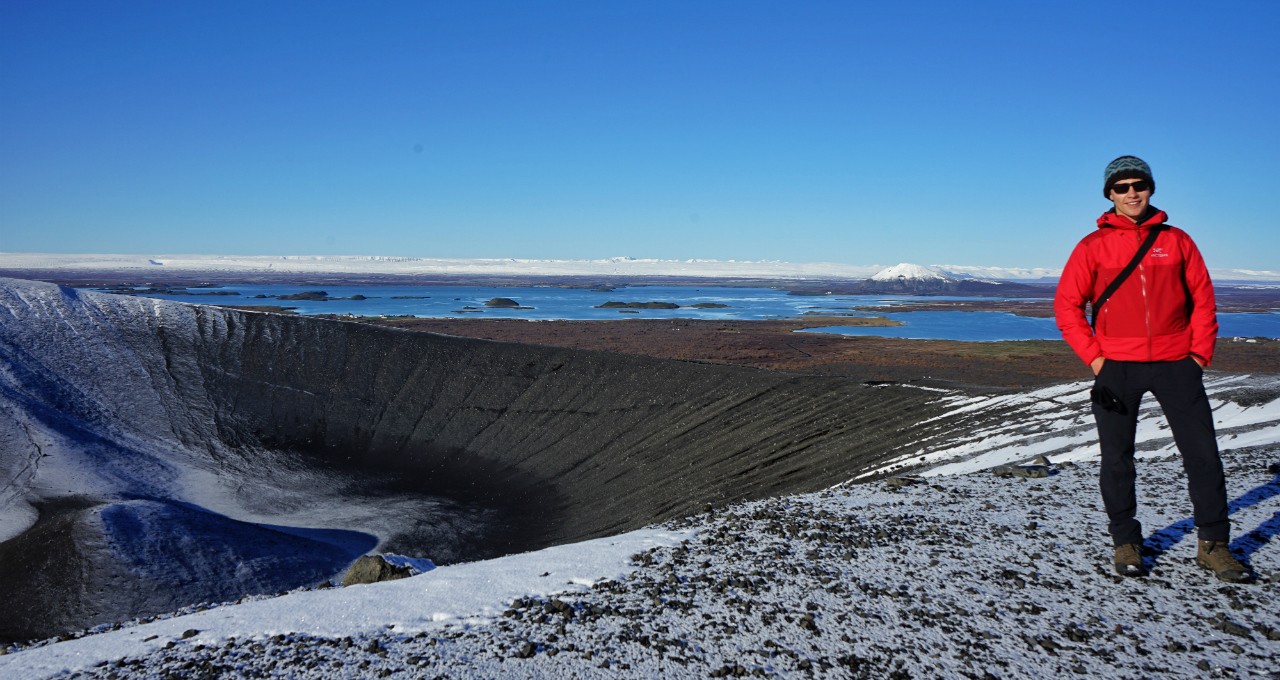 Theron Finley stands near Hverfjall, a cinder cone volcano in northern Iceland located near a geothermal power plant. Finley is travelling around the world to learn how Canada may be able to take advantage of geothermal energy. (Photo: Supplied)

A University of Alberta master’s student is going to the ends of the Earth to learn more about geothermal energy.

Geoscience student Theron Finley is travelling to Alaska, Utah, Nevada, California, Iceland, Germany, and New Zealand over the next four months to meet with experts at universities, government organizations, and private companies to learn about their work in geothermal exploration and technology.

“I want to visit with experts in other countries with successful geothermal industries and seek their guidance, and see how we can build practices in Canada,” said Finley.

Geothermal energy is derived from heat sources in the Earth’s crust. A promising source of consistent, renewable power, it produces fewer greenhouse gas emissions than conventional energy and can contribute to existing power grids. It can power remote off-grid communities, be used as a direct source of heat for homes and businesses, and facilitate food production—yet it is uncommon in Canada.

“I hope that Theron’s experience will enable him to help promote geothermal energy in Canada, and by doing so, aid in reducing our carbon footprint,” said U of A geologist Stephen Johnston, who along with physicist Martyn Unsworth, is supervising Finley.

“In our fight against anthropogenic climate change, geothermal energy could and should be an important part of our renewable energy portfolio,” said Finley. “One large hurdle to using geothermal in Canada is technical uncertainty about the resources we have—an issue that can be addressed using various techniques in geology and geophysics.”

In Alaska, Finley visited several hot springs from which geothermal energy is harnessed for heat and power. Now in Iceland, he has spent a week with the Iceland GeoSurvey in Akureyri, learning about their efforts to find additional hot water for their district heating system. Next, he will visit the Reykjanes Peninsula, including the Hellisheidi Power Plant and Reykjanes UNESCO GeoPark, before heading to Reno, Nevada, for the annual Geothermal Resources Council meeting.

Finley is being funded by a Hugh Morris fellowship from the Kimberley Foundation, which supports Canadian graduate students on a program of self-guided travel and experiential learning with a focus on global sustainability.

Keep up with Finley and hear about his travels on his blog.

Around the world in 120 days: One student’s quest to bring renewable energy technology back home