Artist looks between the lines of oilsands sustainability

When you clean something, you always make something else dirty. 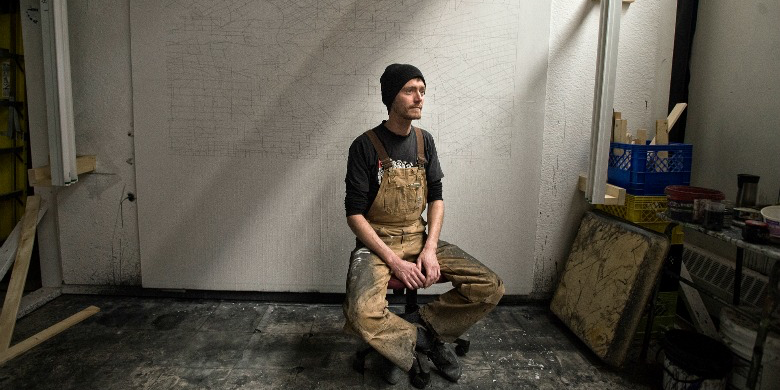 Aaron Veldstra - Experiments in Artistic Hydrology is a performance art project Aaron is currently working on in the department of Art & Design. The project is focused on the definition of two words, remediation and sustainability, and how these words are used in relation to the resource industry.

(Edmonton) At some point along the creative process, the waste left over from Aaron Veldstra’s various projects began to weigh on him.

“Through creating, I realized I was making all these buckets of dirty water and just pouring them down the sink. I sort of became uncomfortable with the fact that I was just pouring my waste down the sink and it was disappearing, making it someone else’s problem,” said the first-year master of fine arts student in the Department of Art and Design. “Out of sight, out of mind—I was basically pushing the problem to a different space so I didn’t have to see it anymore.”

Veldstra, who has spent a decade of summers in the reclamation industry as a tree planter, says his first instinct was to find a way to reclaim his waste water, an interesting process in its own right that engaged his artistic side further.

What has emerged is an early incarnation of a performance art project entitled Experiments in Artistic Hydrology, in which Veldstra attempts to engage people in a conversation about oil and the oil industry in Alberta using the concepts of remediation and sustainability.

“These terms get thrown around quite a bit, but what do they really mean? That’s the question that I’m asking or provoking through these acts."

The acts in question start with Veldstra marking his wall-sized canvas—two sheets of drywall—with a series of lines representing geographical data sets, such as pipelines, roads, cutlines and power lines, related to oil exploration and the resource industry in northern Alberta.

Then, Veldstra applies thick beads of black ink using a syringe to trace along the data set lines. The resulting lines and drips are then sponged off using a combination of water and baking soda.

“What I have is a bucket of dirty water, which I then filter using sand in a series of buckets,” said Veldstra, who models the filtration system after how most municipalities filter their citizens’ drinking water. “In the end, what I have is essentially clean water and a bunch of dirty sand.

“The end result is when you clean something, you always make something else dirty.”

Veldstra says the project isn’t solely a critique of remediation and sustainability of oil producers, but also our reliance on oil in general.

“We’re all implicated in our use of oil. It’s not specifically about oil companies, it’s about everybody: everybody wants to drive a car, everything we do involves oil in some way,” he said. “I’m using the oilsands as this contestable thing, but I’m not specifically talking about the giant holes we see north of Fort McMurray—it’s all of us.

“I’m just trying to broaden this conversation a little bit more, engage people through the act of doing something weird.”

Veldstra is performing as part of UAlberta Water Week in the PCL Lounge of the Centennial Centre for Interdisciplinary Science March 19 from 5–9 p.m.

March 17–22 is UAlberta Water Week, a campus celebration of water leading up to UN World Water Day. The theme of this year's events is "Exploring Sustainable Practices for Water and Energy." Events are free and open to the public.

Artist looks between the lines of oilsands sustainability