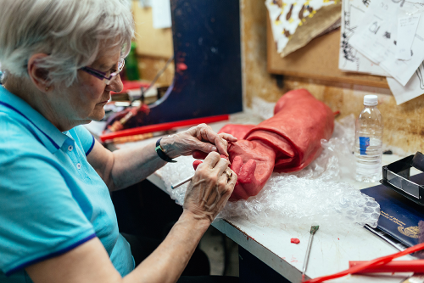 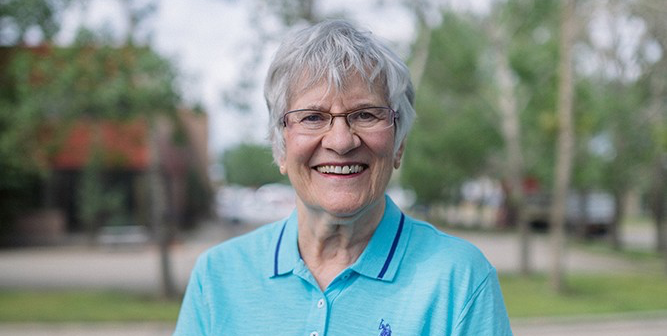 Barbara Paterson’s sculptures are larger than life, much like the acclaimed artist herself. The two-time Faculty of Arts alumna (’57 BA (specCert), ’88 BFA) and well-known Canadian sculptor is set to reveal her latest creation—The Visionaries—at the University of Alberta on September 24, and confesses it may be one of her favourite pieces yet.

That’s saying a lot, considering Paterson has produced some of the most celebrated Canadian monuments—including the Famous Five on Parliament Hill and Lois Hole in St. Albert.

“It’s always an honour to be approached, but this one for me is truly special,” says Paterson of the U of A commission. “I’m so proud to be an Arts alum, and I really love this university. And in some of my past works, I didn’t [connect with] the subject—so this one really resonates with me.”

The Visionaries sculpture depicts Alberta’s first premier, Alexander Rutherford, and the U of A’s first president, Henry Marshall Tory—both of whom were instrumental in the founding of the university. The figures will be the focus of a new monument in the heart of campus dubbed the Presidents’ Circle, and will be surrounded by sitting areas and plaques commemorating the U of A’s 12 past presidents.

“I’m able to honour them and also leave a piece of myself at the university,” says Paterson, who graduated from the U of A in 1957 with a fine arts diploma and returned to full-time studies in 1998 to complete her bachelor of fine arts. “My hope is that people will come and visit them and get to know these gentlemen, and one day it will be lovely if people will say, ‘Oh, I’ll meet you at The Visionaries.’”

The project has been a huge undertaking, and Paterson has been working on the sculpture of “her boys,” as she calls them, for well over a year.

She says she never would have imagined, as a student in the Arts diploma program in the late 1950s, that one day she’d produce a commissioned piece of this magnitude for the university.

It hasn’t been easy. At her age—an elusive number Paterson sidesteps with a smile—the accomplished sculptor says it’s difficult to bend or kneel, as large-figure sculptors often need to do. So she enlisted the help of her granddaughter, former U of A student Sydney Paterson, to work on the founding president and first premier’s feet.

“It’s a nice thing for her to have worked on, to be able to visit later and say, ‘I helped make that,’” says Paterson. “And it was nice for me, to share this legacy with her.”

Even with Sydney’s help, Paterson says it’s been a long and arduous race to the finish line, especially as the reveal date edges closer.

“It’s been a lot of hours, working away diligently in the studio, and I’ve been quite anxious,” admits Paterson. “I didn’t want to let Tory and Rutherford down, because they lifted us up so well. So I used their strength to fuel my work.”

As for the details of the sculpture itself, Paterson’s been keeping mum. She can say that each sculpture reflects the subject’s role and personality, much like the individual figures of the Famous Five.

“They’re lone figures, but like most of my sculptures, they’re interacting with each other—I won’t tell you how,” she teases, adding Tory is decked out in his university robes and Rutherford sports a regal coat. “They’re bronze casts, and one is seated. That’s all I’ll say. You’ll have to come and see the rest.”

The sculpture is a 100th anniversary gift from the Alumni Association to the university, and will become part of the University of Alberta Museums’ art collection.

The Visionaries will be unveiled at noon Thursday, Sept. 24 in the Presidents’ Circle (89th Avenue and 114th Street), and will serve as a kickoff for Alumni Weekend festivities on campus.

U of A faculty, staff, alumni, students and the public are invited to the event to mark the Alumni Association’s centennial and pay tribute to the university’s founders.

To register for the free event, visit the Alumni & Friends website.