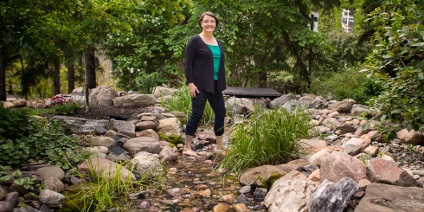 Erin Kelly says she often found peace amid the oasis of UAlberta's North Campus while earning her arts degree.

Erin Kelly took a long detour on the road to the convocation stage, but it was what she learned along the way that made the destination possible. 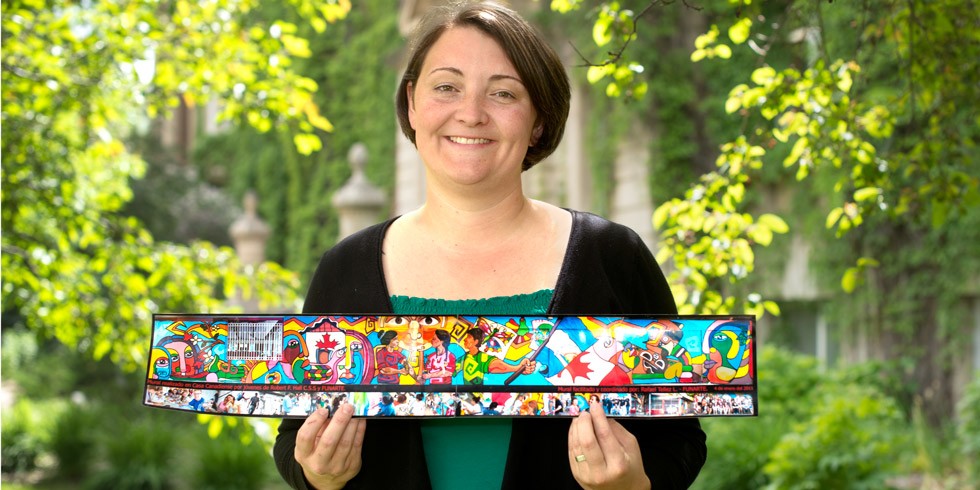 Erin Kelly holds a reproduction of the wall mural at Casa Canadiense in Managua, Nicaragua, where she worked for two years as a global education co-ordinator. (Photo: Richard Siemens)

Erin Kelly had built a fulfilling life—a job that allowed her to use her passion to contribute to her community in a meaningful way, a growing family and a loving husband. But one unfinished thing kept hanging over her: her university degree.

Fifteen years ago, Kelly began her university journey. She’d been fascinated with Latin America after travelling to Nicaragua on an educational youth tour when she was 16, making the Latin American studies program a natural fit. Like many students, she started on her post-secondary path right out of high school, beginning in the two-year arts transfer program at Grant MacEwan with the plan to continue her studies at the University of Alberta.

During her first year of school, she met her husband, a Nicaraguan student visiting Canada for six weeks on an educational tour of Alberta. They began a long-distance relationship: “It was cross-cultural, cross-language, and so that was all happening in the early years. I was trying to bring him here.”

He finally came to Canada to join her in 2002, the same year she began her studies at the U of A, with a major in political science and a minor in Latin American studies. Then, in 2003, she became pregnant with her first son. She explains, “That was sort of the first veering off the straight and narrow path.” However, after her son was born, she was determined to stay in school and complete her degree.

But after he was born, she faced a new obstacle: postpartum depression.

Low point for a high achiever

Like many people facing mental health issues, Kelly felt social stigma and shame about her “weakness.” She didn’t seek help and so didn’t get a formal diagnosis. Reflecting back on that period in her life, particularly after having similar postpartum challenges with her two subsequent children, she came to acknowledge that she was experiencing depression. She describes struggling to manage it all: “I just wasn’t coping well and wasn’t able to maintain my studies, my academics, and also navigate this new role.”

Despite her hopes to complete her degree, she ended up having to leave university.

She had always been a good student. A high achiever in high school who had academic aspirations, she struggled to deal with the situation she was now in. The loss of her university dreams took a toll on her mental health.

With no future that she could see at the university and a need to work to support her family, Kelly left the U of A. Her husband was still a newcomer on a temporary visa, so with him unable to work in Canada, she looked for a new path forward in her career.

“I was really lucky. I got hired on at the Boys and Girls Clubs as a crisis intervention worker, did that for a month, and then was offered the assistant manager position.” It was a perfect fit. Growing up, she was involved with the Bissell Centre, and she’d developed a passion for working with families and children who were facing economic and social challenges. “The Boys and Girls Club was the next step for me to turn that volunteer passion into work.”

After a couple of years, she was managing three Boys and Girls Clubs sites across the city. “I loved that. I got to hang out with kids every day and plan programs, work with staff to plan programs. I got to manage the summer camp for a summer and do all of the camp programming.” But after three years, it was time for the next big adventure: Nicaragua.

A job posting came across her desk, bringing the opportunity to return to her husband’s home country and be closer to his family, who were all still living there, and to give their son a chance to learn the language and connect to his father’s cultural roots. While she was waiting for her interview for the position, she discovered she was pregnant with her second child.

While that posed an extra challenge, they decided that with family support available, they could still go ahead, and so when the job was offered, she took it. Her son was born in July 2009, and that September, with new baby in tow, they moved to Nicaragua.

“We got to work with groups of high-school youth who would come down, and my role was to facilitate those trips for those groups.” Students would fundraise for a project, then Kelly’s organization would connect them with a community in Nicaragua that could benefit from their assistance. “They would come down and spend time in that community, and then we would do some alternative education around Nicaraguan history, culture, poverty and social justice.”

After two years, the family packed up and returned to Canada.

“All this time, this unfinished degree was hanging over my head. I never really thought that I’d get to a place that I could come back and finish it. I read that letter saying, ‘You are being told to leave’ like I was never going to have a chance to get back in.”

But that would change. On her return to Canada, Kelly took a job with the YWCA co-ordinating programs for girls. That’s where she became aware of the Community Service-Learning program at the U of A as a community partner that offered student placements for women’s and gender studies classes, with students acting as mentors for girls in the Girlspace program that Kelly ran.

“I was attending the orientations that CSL puts on for their partners, and at one of the orientations there was talk of this position that was going to be opening up. I turned to my colleague and said, ‘I want that job!’” When the position was posted, she applied. And so, years after she left, Kelly returned to campus in a very different role: partnership co-ordinator for the U of A’s CSL program.

As a partnership co-ordinator, she helps to connect community partners with instructors to fulfil the needs of the organization and the learning goals for the class, and to ensure a good fit for students.

“I love the work. And within a few months of being in that position, I was really thinking about checking if there was any way if I could do this, whether they would forgive some of my past academic record, if time passes and maybe you get a second chance.”

It wasn’t easy to admit to her supervisor what her academic track record had been, but Kelly found a warm and encouraging supporter in her new boss, who told her, “Maybe this is the time that you’re going to go and finish it.”

Kelly was readmitted to the U of A with just seven courses left to finish her degree. In 2013, she re-enrolled, taking one course at a time on top of her full-time work with the CSL program. She also had her third child, a daughter, in 2014. “She was born in March, just two weeks shy of the final exam.”

And now, convocation is finally here.

“It’s not the straight progression that I initially thought I would follow, but I feel really lucky that despite not having come out with my degree right away, I was able to get meaningful work at every point in my life. I’ve never had a job that I didn’t love and that wasn’t also contributing in some way to community.”

Through all of that work, she developed skills that were applicable and relevant to her success, but the missing piece of the puzzle was her degree. Now, with the weight that sat on her shoulders for so many years gone, she says the lightness is tangible: “I didn’t realize how much it was weighing on me until I got so close to finishing.

“It’s literally going to change nothing about my day-to-day—I already  have the job, I’ve got the family, we’re well established, stability, all of those pieces are already in place—but it was this one piece of unfinished business.”

What finishing her degree has done is open the door to the next steps. With her return to school, Kelly has renewed her love of learning, something she wants to carry on for life.

“One thing I’ve realized in coming back to school is how much I enjoy being in a classroom setting where I can learn about new things and ask questions.” She’s registered as a special student for the fall to take another course.

“I’m also, for the first time, thinking about how I could do something more.” She’s considering an after-degree program in social work and maybe, eventually, graduate studies. “I’m trying to find something where I can keep my great job, which I love and enjoy, but be able to continue my education beyond that.”

She also sees her degree as a legacy for her children.

“The other thing that’s been important for me in coming back and finishing this is being able to show my kids that you don’t have to follow the path that everybody tells you to follow. There’s no right way of doing things, no one way of doing things. And it’s OK to have missteps or take the path less travelled. You can always go back and try again.”

Now, as she graduates, Kelly wants to share that same message with others who might be coming from the same place she was.

“What stands out for me most is being readmitted. Being given that second chance.”

“If there are people who wonder, ‘Can I ever go back and do that?’ or who feel like you were told, ‘You’re not worth it anymore, you can’t come back,’ I want them to know that you can mess up, but you can turn things around still and come back and try again.”