On his way to an honours English degree, Scott Jackshaw found a way to reconcile his sexual orientation with his Christian faith. 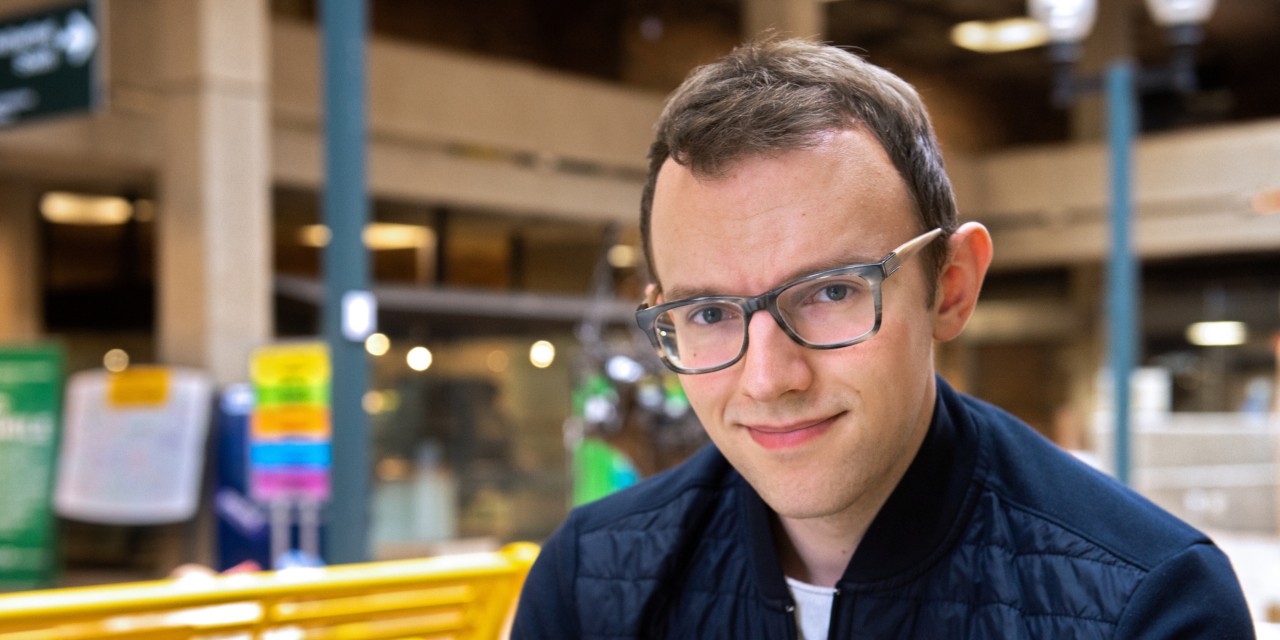 As a scholar and poet, Scott Jackshaw explores the tensions—and the unexpected affinities—between Christian theology and queer theory. “A lot of queer people leave their faith, but I didn't," he said. "I still identify as Christian, even though my faith has mutated a bit." (Photo: Richard Siemens)

First year of university can be a profound awakening on many levels, but for Scott Jackshaw, his first English class was nothing short of earth-shattering.

Raised and educated as a member of a Christian fundamentalist church, Jackshaw had never met an openly gay person, and felt he had no choice but to keep his own sexual orientation firmly in the closet.

"From high school to university, I just didn't have a community, didn't feel safe, didn't feel I belonged," he said.

“I was subjected to anti-queer slurs and rhetoric constantly. The verbal and spiritual abuse I suffered there has left so many scars, and it devastates me to think someone else might experience that.”

When he graduated from a Christian academy and arrived at the Department of English and Film Studies, however, it felt like another galaxy.

“One of my profs mentioned her (female) partner at one point, and it kind of broke my mind,” said Jackshaw. “I thought, ‘People live here in this place openly without shame, without feeling life is impossible.’"

He spent that year struggling with his identity and his faith, consulting with his pastor about the best way forward. The options were pretty limited.

“He said repent all of it, and give it all up to God, whatever that meant,” said Jackshaw. “I tried hard to do what (the church) wanted me to, because it was my family, my community, everything I had. I didn't want to lose everything."

This was the same church that sparked headlines in 2016 for its opposition to the impending Bill 24, which lends protection to gay-straight alliances in schools.

At the time, one church official suggested conversion counselling was adequate support for LGBTQ+ students, arguing, "There are many people that have been delivered from that type of lifestyle through the power of the gospel.”

After a lot of painful soul searching, Jackshaw finally turned away from his church. It almost cost him his family and home community. But he was also liberated by a new, empowering sense of self, one that retained a strong grounding in faith while drawing inspiration from a progressive discipline known as queer studies under the direction of Michael Litwack.

“A lot of queer people leave their faith, but I didn't. I still identify as Christian, even though my faith has mutated a bit."

Some might see Christian theology and queer theory as inherently antithetical, but Jackshaw argues there is huge insight to be gained from the dialogue between them, from “the places where they have affinities, and places where they don't line up as well.

“Those moments of tension and compatibility can be the most productive moments for thinking.”

Looking for a new place to worship after his falling out with his church, Jackshaw came across the First Mennonite Church and thought it might be a good fit, even if its website gave no indication whether it was gay-friendly.

The Mennonite church couldn’t have been more receptive, said Jackshaw. He even teamed up with interim pastor Donna Dinsmore, a woman from the American south who had also struggled to free herself from a fundamentalist church in the 1980s.

The two set out to educate the congregation on what it means to be a gay person of faith, inviting several queer guests to meet with a group of congregants in a private home, with a view to helping make the church a more welcoming space.

“I’d never met anyone like Scott before, someone who at a relatively young age had the courage to both embrace his sexuality and his relationship with God without losing a grip on either,” said Dinsmore. “He is committed to holding the creative tension in his very being.”

Since then, Jackshaw’s personal quest has evolved into a thriving intellectual and spiritual inquiry, garnering him almost every undergraduate award available for both his scholarship and poetry.

A Roger S. Smith research award last summer, for example, allowed him to study GSAs in local religious schools, documenting the ways in which they were either implementing Bill 24 or not.

"I talked to one group of students whose GSA was literally moved to a closet, which I found the strangest metaphor-taking-on-flesh situation," he said.

According to one of his instructors, Katherine Binhammer, “Scott could have matched hatred with hatred; he had every right to. But his entrance into university put him on a different path, a path of understanding and conversation.”

She said he used the intellectual and social space of the university to think critically, creatively and deeply about pressing and fundamental questions for the public good.

Next fall, Jackshaw will begin a PhD in English at Brown University, continuing to interrogate questions of sexual identity and faith.

"I guess it's become my project to reconcile the two, and recognize the way in which they've really always been a site of flourishing and nourishment for each other."

As for reconciling with his family, that could be another long-term project.

"We're working on it,” he said. “We've made huge steps that I thought were impossible at the start; it really opened my eyes to how people can change.

"Coming from that church … I didn't have a lot of faith in the ability of things to change for the better, and I think my family has really proved me wrong on that in a lot of ways."