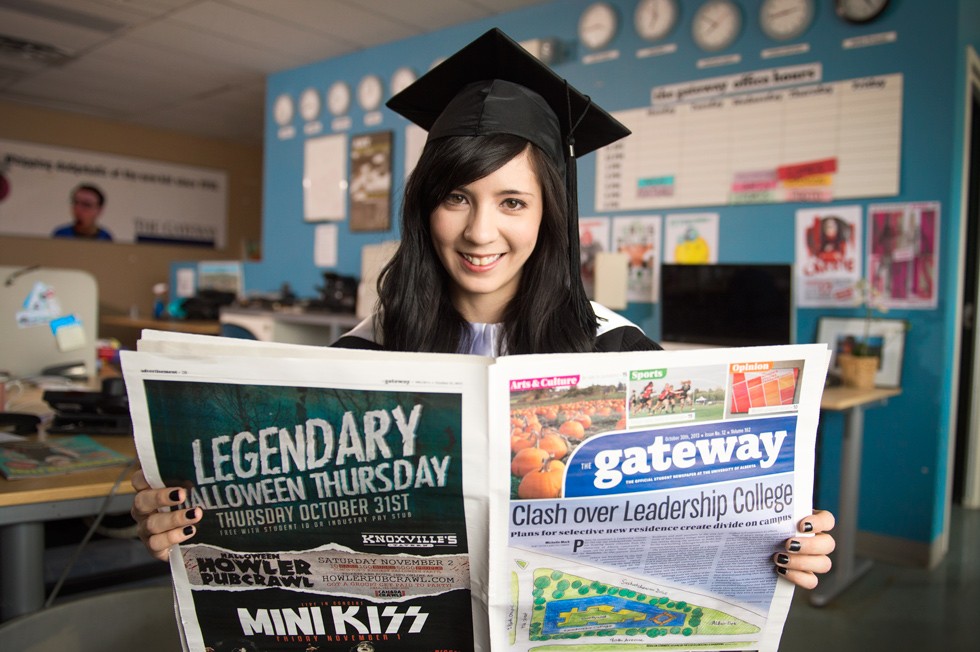 For Michelle Mark and Madeline Smith, volunteering for The Gateway opened doors to a proud tradition and a creative career.

English majors and budding journalists Michelle Mark (left) and Madeline Smith both got a head start on their careers by volunteering for The Gateway. (Photo: Richard Siemens)

(Edmonton) The alumni roll call of The Gateway, the University of Alberta’s vaunted student newspaper, reads like a who’s who of Canada’s Fourth Estate. In fact, there may be no better proving ground for Canada’s leaders and opinion makers.

Former prime minister Joe Clark, former Alberta premier Peter Lougheed, Edmonton mayor Don Iveson, chief justice of the Supreme Court of Canada Beverley McLachlin, and notable journalists Todd Babiak, Cam Cole, Fish Griwkowsky and Mark Spector are just a small sampling of the more than 3,000 U of A contributors who learned the ropes and found direction writing, editing, opining and deadline-crashing over the 103-year history of the award-winning campus weekly.

Added to the list of those alumni who found their way onto the pages of The Gateway are Michelle Mark and Madeline Smith, two bachelor of arts degree recipients, both in English and both with minors in political science.

“When I finally got the guts to walk into The Gateway it was pretty terrifying,” says Mark, who didn’t reach out to the student weekly until the midway point of her degree. “After I took my first assignment I thought,  ‘Oh no, I have to do an interview, what do I do?’”

After overcoming those initial fears, the intrepid Mark says she remembers finally filing that first piece and beginning the agonizing wait for what would certainly be a reply steeped in a sea of red ink with a request to rewrite—if not the suggestion that she would be well advised to seek out an alternative creative outlet.


“Instead April Hudson, the news editor at the time, sent back an email saying, ‘This is awesome, no edits necessary, you have a flair for news,’” said Mark. “I think the confidence she showed in me made me want to push myself; otherwise I don’t think I would have stayed on.”

Hudson says Mark’s innate ability to tell a story was apparent from the start. What wasn’t, however, was how well she would fit within the collective memory and the student-to-student support system that is paramount to The Gateway’s success.

“The one thing that is cultivated in our editors is an ability to show volunteers how to actually do things,” said Hudson, reporter with the Spruce Grove Examiner/Stony Plain Reporter and 2012-13 Gateway editor. “Constructive criticism is an essential part of the job and is probably the hardest thing to do as an editor, but it is also one of the most rewarding.

“I was always really impressed with Michelle.”

Some 200 mainly news stories later, a stint as The Gateway’s first ever online reporter, a year as the news editor, and a 2014 John H. McDonald Award from the Canadian University Press for most promising student journalist, Mark has found herself interning at the Windsor Star this summer before commencing work on a graduate degree in journalism at Columbia University in New York in August.

“I definitely wouldn’t be going to Columbia were it not for The Gateway,” said Mark. “It came at a time in my life when I was craving a hands-on, practical use for the things I was learning. The Gateway threw me out into the crazy world of university governance and provincial politics and said, ‘OK, you are responsible for asking the questions that other students can’t and telling the stories that no one else would tell, so have fun.’”

Madeline Smith: A funny thing happened on the way to Ottawa

And while Mark waited until she was halfway through her university education to find The Gateway, Smith says she showed up looking for The Gateway.

After dabbling in journalism in Grade 12, Smith says, there was no doubt she would eventually study journalism; the only question was where. When Carleton University’s revered journalism program came calling, the last of the missing pieces fell into place. 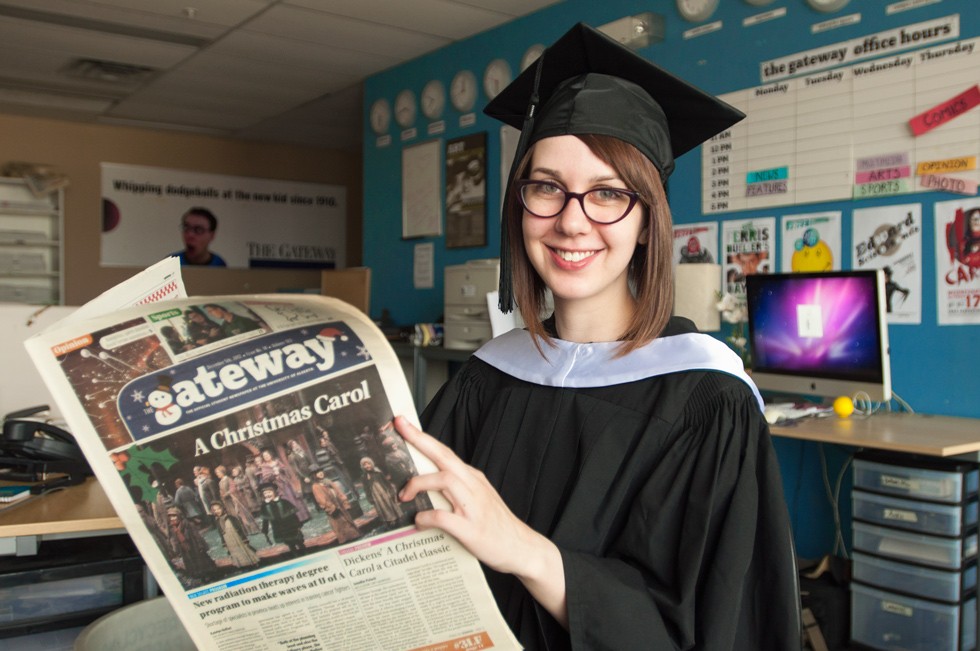 Then a funny thing happened along her fated path to Ottawa—she decided not to go.

“I got as far as making my class schedule for Carleton,” said Smith, who, just to be on the safe side, also began filling out her U of A class schedule. “I realized the U of A, although there was no formal journalism program, had way more choice as far as the range of classes I could take and the different kinds of topics available.”

It was in that moment that The Gateway unknowingly recruited a long-serving and trusted contributor. “It was my first week on campus, and I walked up to the recruitment booth and said ‘I want to volunteer,’” said Smith.

Smith’s writing soon became a staple of The Gateway’s arts section, so much so that she was called in to serve as arts and culture editor at the midway point of her second year, which carried over to her third year before she became the paper’s managing editor in her fourth.

“I love the team atmosphere, working late, the interesting challenges that arise unexpectedly and relying on each other to get the paper to press,” said Smith. “I think I need an office of co-workers who depend on me or that I depend on them for me to function properly.”

Journalism being known as a lifestyle more than a profession meant Smith had to all but step away from The Gateway this past year to finish her degree, but the paper’s indelible impression remains. Smith is spending the summer interning at Avenue Magazine in Calgary before setting out for Ryerson University in September to embark on a master’s degree in journalism.

“I think that I have had an opportunity to explore some different things that I wouldn’t have otherwise,” says Smith. “On the flip side, The Gateway is one of the largest student newspapers in the country and probably the best. I think I learned almost everything I need to know about good newspaper practices there.”