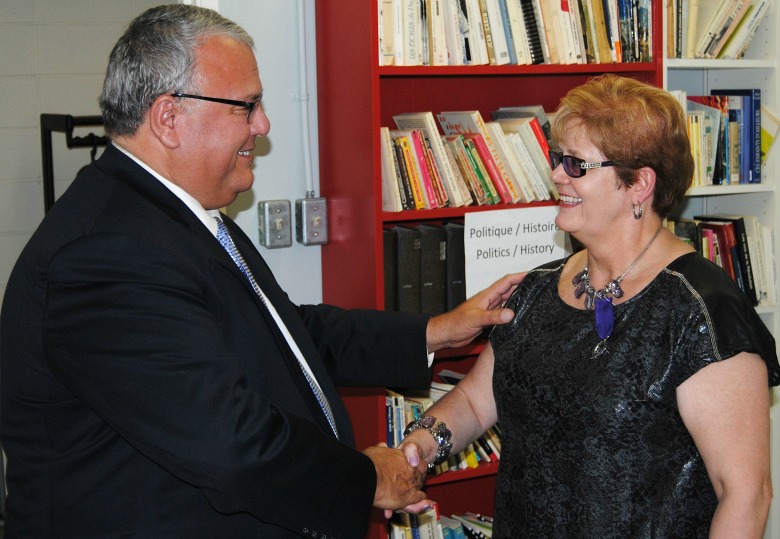 130918-anna-gural-migdal-banner
Anna Gural-Migdal receives the medallion of the Order of Academic Palms from Calgary's consul of France, Jean-Charles Bou, during the order ceremony at the Alliance Française in Edmonton.

(Edmonton) It’s been an award-winning year for University of Alberta professor Anna Gural-Migdal. Not only did she receive a teaching award from the Faculty of Arts earlier this year, but she also recently received France’s highest academic distinction, the Order of Academic Palms, from France’s minister of education.

At the recent order ceremony at the Alliance Française of Edmonton, Gural-Migdal was declared a knight of the order and decorated with a medallion in recognition of her merits, talents and exemplary activities by Calgary’s consul of France, Jean-Charles Bou. Napoleon I created the Academic Palms in 1808 to recognize eminent members of the University of Paris. It was extended in 1868 to honour anyone who renders illustrious service to French education and culture, and is France's oldest non-military decoration.

“I am honoured to receive this distinction, since it recognizes the bridge between my country of origin, France, and Alberta, where I have lived for almost 20 years,” said Gural-Migdal, a professor in the Department of Modern Languages and Cultural Studies. “I have always considered myself privileged to represent two cultures, to hold citizenship in two countries and to champion bilingualism.”

Gural-Migdal was especially praised for her contributions to teaching 19th-century French literature and film, and for her interdisciplinary research on Emile Zola, leader of a literary movement called naturalism and one of the most famous French writers of all time.

When Gural-Migdal first read Zola as a grad student, she became fascinated by what she describes as the visual dimension of his writing. “Zola’s use of metaphors and symbols, all organized into complicated networks, is remarkable.”

She has since dedicated the bulk of her research career to studying his works, and through her research and role as president of AIZEN—an internationally recognized scholarly society dedicated to Zola and naturalism—Gural-Migdal is now regarded as one of the world’s foremost specialists on Zola.

Her research uses new theories and parameters to examine Zola’s texts in relation to cinema, photography, painting and video. “I’m especially inspired by the connections between literature and film. I have studied the literary aspects of film, especially in cinematic adaptations of Zola’s works or the work of filmmakers who were highly influenced by the way Zola conceived his novels,” she said.

Gural-Migdal’s passion for 19th-century French literature and film is most evident when she teaches. Her teaching excellence was recognized with a Faculty of Arts Undergraduate Teaching Award, which honours instructors who go above and beyond for students. “When I teach literature courses, I do not promote a narrow perspective. I try to make the texts come alive.”

Gural-Migdal constantly tries to impart the significance of studying writers whose works “never go out of date.”

“I tell students that it is really quite demanding to do studies in literature, since you need to have a logical and scientific mind, sensitivity to literature as an art form and a broad general cultural background. In Japan, people who have doctorates in literature are hired to be CEOs of large companies. Studies in literature can lead to surprising directions,” she said.

She especially loves teaching French cinema, which gives students a different lens to reflect on their own lives and situations. “My greatest satisfaction as a professor is … to see their appreciation for the value of studying French literature or film from angles they had never before imagined, adding a new dimension to their understanding of all aspects of life and across cultural differences.”

Gural-Migdal says she has flourished as both a teacher and a researcher since joining the U of A in 1996. She identifies the Department of Modern Languages and Cultural Studies as “ideal” ground for her career because it provides her with freedom to develop and teach courses in an optimal way for her students.

“The Faculty of Arts encourages and supports a very high-quality teaching and learning environment. The professors hired are also serious scholars and, as we know, active research contributes to excellence in teaching. The University of Alberta is one of the best universities in Canada and North America. I am very proud to be a professor in such a highly regarded institution and to contribute to its excellence.”