I don’t know who I would have been if I didn’t come to The Gateway. It’s made me the person I am.

Arts student at the helm of award-winning student paper

Managing editor Kate Black finds confidence and purpose in the newsroom of The Gateway. 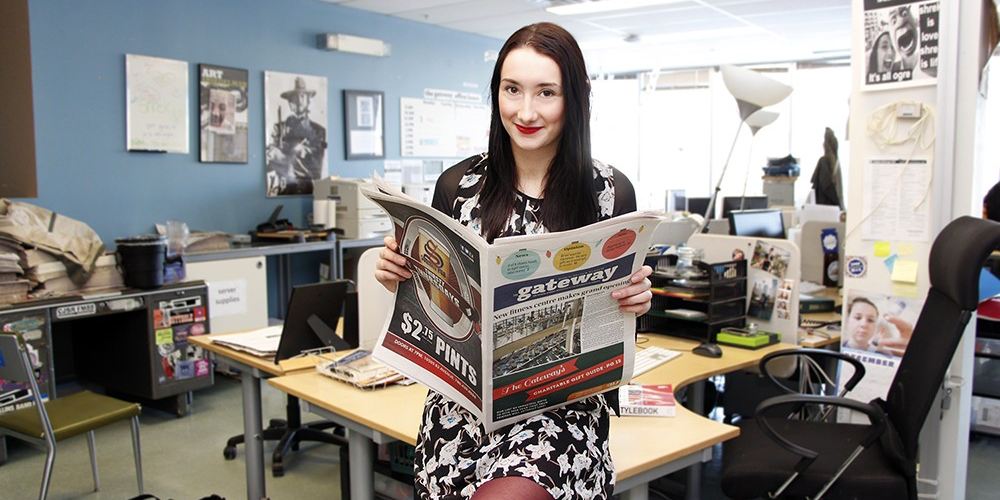 Kate Black describes her work as managing editor of The Gateway as "one of the most rewarding and educational experiences of my life." (Photo: Angelique Rodrigues)

(Edmonton) Kate Black doesn’t get the Monday blues. As managing editor of the University of Alberta’s student newspaper, The Gateway, she’s learned to love the most detested day of the week.

Monday is layout day in the newsroom. The paper goes to press Tuesday morning, so the first day of the week is the busiest by far for the fourth-year political science student.

At 7 a.m. she hits the U of A gym for a little “me time” after a long Sunday night of editing. By 8:30 a.m. she’s ensconced at her desk, poring over stories and artwork. Around 11 a.m. Black calls the editors’ meeting to order, where they flag the week’s top stories and choose a front-page piece. After that she might spend some time updating the Gateway website or including any breaking news in the roundup before heading to her classes from 3 p.m. to 5:20 p.m.

That’s a full schedule by any definition, but Black’s day isn’t over when the school bell rings. Instead, it’s back to the newsroom for page edits and layout. Black fine-tunes the arts and opinion sections before taking her red pen to sports and news. Around 9:30 p.m., when her eyes are failing her and she’s deemed the edition complete, Black stumbles home, exhausted but satisfied.

“It’s a full-time job and it’s a tough one, but it’s a job that I enjoy,” says Black, who became the newspaper’s managing editor last March. “It has been one of the most rewarding and educational experiences of my life.”

Black first joined the school paper as a volunteer for the arts and culture section in 2011, because she thought the writers “seemed cool.”

“My Grandma had encouraged me to join a club, and I thought, ‘These are really interesting writers; these are the people I want to meet,’” said the St. Albert-born student. She never expected to get so involved—or end up at the publication’s helm.

Black’s first published piece was a “pretty terrible” album review, and her first interview “a disaster.”

“I was very intimidated and had to interview this linguistics researcher,” she recalls. “It was painful and so, so awkward.”

Fortunately, it got easier for the intrepid reporter. She found her voice, both in print and in person. Since then Black has written more than 100 stories for The Gateway, the university’s alumni magazine  New Trail, and Edmonton’s Vue Weekly. In 2013 she served as The Gateway’s social media editor and last year won three John H. McDonald Awards for Excellence in Student Journalism from the Canadian University Press.

“There’s this institutional history that The Gateway is ‘crazy and offensive’ and this idea that student journalism, in general, is a bit of a joke. But it’s so far from the truth,” she says, noting that The Gateway was also named best student newspaper at the Canadian Community Newspaper Awards. “This is real journalism; we report on important news of public interest and value, and we take it seriously.”

Of course, that doesn’t necessarily apply to every article Black has penned during her time at the newspaper.

In fact, the article she jokingly calls her “Gateway legacy” is an opinion piece on the best places on campus to poop. “It was pretty popular,” laughs Black. “And now it’s haunting me.”

She’s had several people recognize her byline from the opinion piece, including a source during an important interview. “It was super embarrassing at the time,” says Black. ”But it’s such a classic student-newspaper kind of story, I feel like it will be my nostalgic, rite-of-passage article.”

It’s certainly made for an interesting memory, but then, so has the rest of her time at the newspaper. Black says she learned more about herself in the newsroom than anywhere else.

“I don’t know who I would have been if I didn’t come to The Gateway,” says Black, who plans to finish her BA this year before heading to grad school. ”It’s made me the person I am.”

Though she’s also interested in humanitarian work, Black is certain writing will be part of her career in some way.

Without The Gateway, she knows she might never have discovered her love of journalism. And who knows—maybe she would have hated Mondays.

Arts student at the helm of award-winning student paper
Newsroom