eHUB lends a helping hand to two intrepid women who launched their startups between classes. 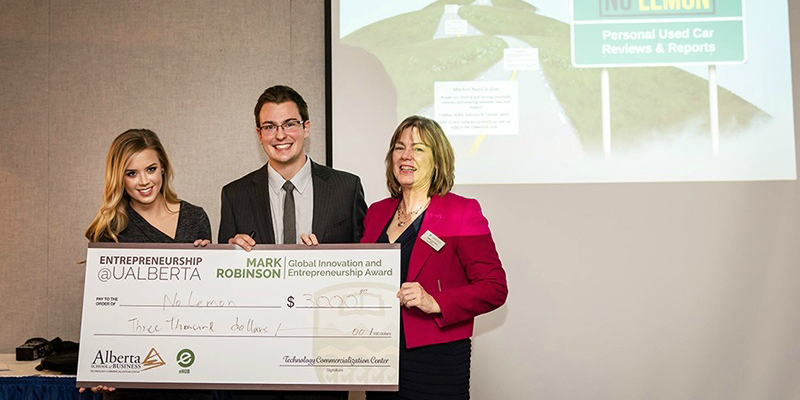 Ola Cislik (left) and her partner receive a cheque from Lesley Cormack, dean of the Faculty of Arts (right), at UAlberta’s 10th annual Innovation and Entrepreneurship Dinner.

(Edmonton) Starting an independent business can be a lonely endeavour. When Adrianne Thomson had the idea for her startup, MiniPrive—a high-end, online clothing boutique for kids—she was a busy University of Alberta student and a full-time mom, dreaming about kids’ fashion in her spare time.

As the idea for MiniPrive began to take shape, Thomson knew her modest business and sales background would need to be bolstered if she hoped to launch the website successfully.

“In early 2014, I plugged ‘University of Alberta’ and ‘entrepreneur’ into Google looking for a club or website—somewhere I could find advice and network,” says the third-year BA student. “That’s how I found eHUB. They were just starting out, but I knew I’d stumbled onto something good.”

eHUB is a networking space for entrepreneurs at the U of A to link up, share their ideas and collaborate on projects. Thomson says the EHUB office, launched in January 2014 and housed in HUB Mall on the university's North Campus, is a teeming hive of creative energy.

The East Asian Studies major became a familiar face there, working on MiniPrive with eHUB’s director, Qasim Rasi, and pitching her startup to her peers.

Before long she’d built a team of designers and programmers. By April 2014 she had launched MiniPrive, and now, less than a year later, it’s a successful, revenue-generating business with a global client base.

“In terms of support, Qasim has been incredible, and the peer-to-peer connections have been paramount for developing and fine-tuning my ideas,” says Thomson, who also took part in the Students to Startups partnership program with eHUB and Startup Edmonton. “You can build off each other’s ideas, connect with people and find opportunities to gain experience.”

The opportunity for work experience is what drew fourth-year political science student and NoLemon founder Ola Cislik to eHUB.

She started out doing communications and social media for eHUB and was elected president of the program’s eCLUB, a student entrepreneurship group on campus. That’s where she connected with her current partners—business students Michael Tessier and Bradley Lockhart—and began ironing out the details of a startup web service for buying and selling used vehicles.

The concept for NoLemon was one Cislik had while navigating a particularly troublesome car purchase of her own. She and her partners came up with a proposal for a vehicle-vetting website, intended to bridge the gap of the unknown between buyer and seller during a private vehicle sale.

“When we all got together, the most amazing part of it was how our different backgrounds led us to a business proposal in this amazing way,” she explains, adding that the group’s discussions turned to serious plans for a secure, trustworthy web platform. “We started developing an idea for a website and submitting it to competitions.”

The idea proved popular; in November, Cislik was awarded the Mark Robinson Global Entrepreneurship award for the business plan at the U of A's 10th annual Innovation and Entrepreneurship Dinner. This March, she and her partners will submit NoLemon for the 2015 TEC Venture Prize, hosted by TEC Edmonton.

Like Thomson—who received an honourable mention at the dinner—Cislik’s startup has come together in under a year, and she’s hoping to launch NoLemon by April 2015.

Both women say they owe their success to eHUB, to Rasi—affectionately called Q—and to the university for creating an environment of entrepreneurial triumph.

“None of it would be possible without eHUB,” says Thomson, adding that eHUB has become an incubator for innovation on campus.

Cislik echoes that sentiment. She says she’ll continue working at eHUB and with eCLUB in 2015, though she’ll be taking a step back from academics to focus on NoLemon.

“I’m excited to continue watching my peers connect and develop their business ideas,” she says. “There are 40 startups currently operating out of the eHUB space, and my guess would be that number is going to grow.”