When Srosh Hassan spoke in the House of Commons, she became a viral sensation—and a strong voice against ignorance. 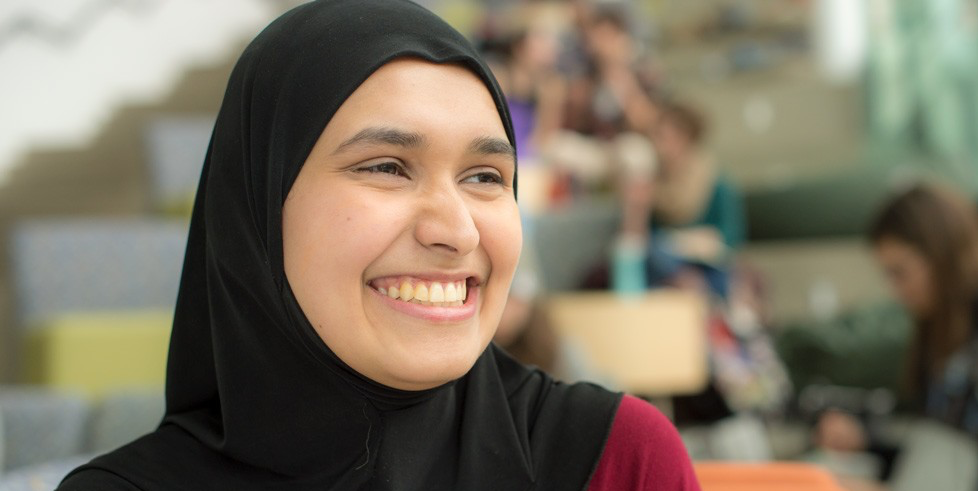 In her impassioned speech in the House of Commons on International Women's Day, Srosh Hassan lent a powerful voice to Canadian Muslim women. (Photo: Richard Siemens)

Srosh Hassan is no stranger to public speaking, but when she stood up in the House of Commons during the Daughters of the Vote event, emotion got the best of her.

“As soon as I opened my mouth, my voice cracked on the first word,” she said, “and I knew I wouldn’t be as composed as I wanted to be.”

No matter. It was precisely her emotion—along with the power of her words and her conviction—that had her peers in the House standing in applause several times during her two-minute and 40-second address.

Hassan, 21, a third-year University of Alberta sociology student, won the opportunity to give her speech on International Women’s Day, along with 29 other women, as part of a competition organized by Equal Voice, an organization that encourages participation by women in Canadian politics. It was her heartfelt plea on behalf of Canadian Muslim women that caught the media’s attention.

“There is no seat for hate here”

She decided to focus her speech on Islamophobia, a word that has generated heated debate in Parliament lately but one she believes accurately reflects a disturbing cultural trend.

“It's important to call it what it is—that a lot of the problems are rooted in fear," she said.

“Madame Speaker, Islamophobia is a heavy word in today’s discourse, but it is heaviest for those who are on the receiving end of it,” she told the House, expressing her frustration at having to apologize for extremists or “for the actions of a small group of people that do not represent me or any Canadian.

“We all have a responsibility to challenge a growing culture of ignorance, rather than justifying xenophobia and prejudice under the veil of free speech…. This is my Canada and there is no seat for hate here.”

When her speech ended, said Hassan, she looked up to the gallery to see a group of MPs applauding enthusiastically.

"The reception was overwhelming,” she said. “Every time I think about it, it takes me right back to that moment. I was in tears, but I think most of them came from saying those words.”

When she left the chamber, Hassan received a hug from Iqra Khalid, the Pakistani-Canadian MP who introduced the controversial private member's Motion 103 last December condemning Islamophobia.

“That was the most special thing,” said Hassan. “It's women like her, and politicians like her, who give me the courage to make speeches like that.

“To have her say, 'You made a great speech. I think you're doing great work, and I want to work with you to make Canada better for everyone’—that was so touching."

One of many with a similar story

Hassan moved to Canada from Pakistan when she was four years old. Her family moved often while her father searched for work, she said, living all over Ontario and Quebec.

"It's a real privilege to be a Canadian citizen. I identify as Canadian, but I am not shy at all of my background, because that is my heritage. I think I'm just one of many who have a story like that."

Ten years ago, the Hassans finally settled in Edmonton, where Srosh attended Old Scona Academic High School and found her oratory gift in the school’s debating club. She was also a member of the Canadian National Cadet Shooting Team in 2012 and was recognized as the most outstanding Army cadet in Canada in 2013.

Hassan continues to mentor students in debating at Old Scona while honing her public speaking skills in the U of A Debate Society. She volunteers for The Landing, a group that offers support for gender and sexual diversity on campus, and contributes regularly to The Wanderer, a local publication launched by a group of U of A students in 2012.

Hassan said she hasn’t yet decided on a career. Law school might be next, with a human rights focus. But whatever she ends up doing, it will likely involve working with “marginalized people who don't have the representation they deserve, or a voice,” she said. “I just know I'm really invested in social justice, but we'll see where life takes me.”