International team of scientists, including U of A astrophysicists, observe never-before-seen behaviour of a black hole. 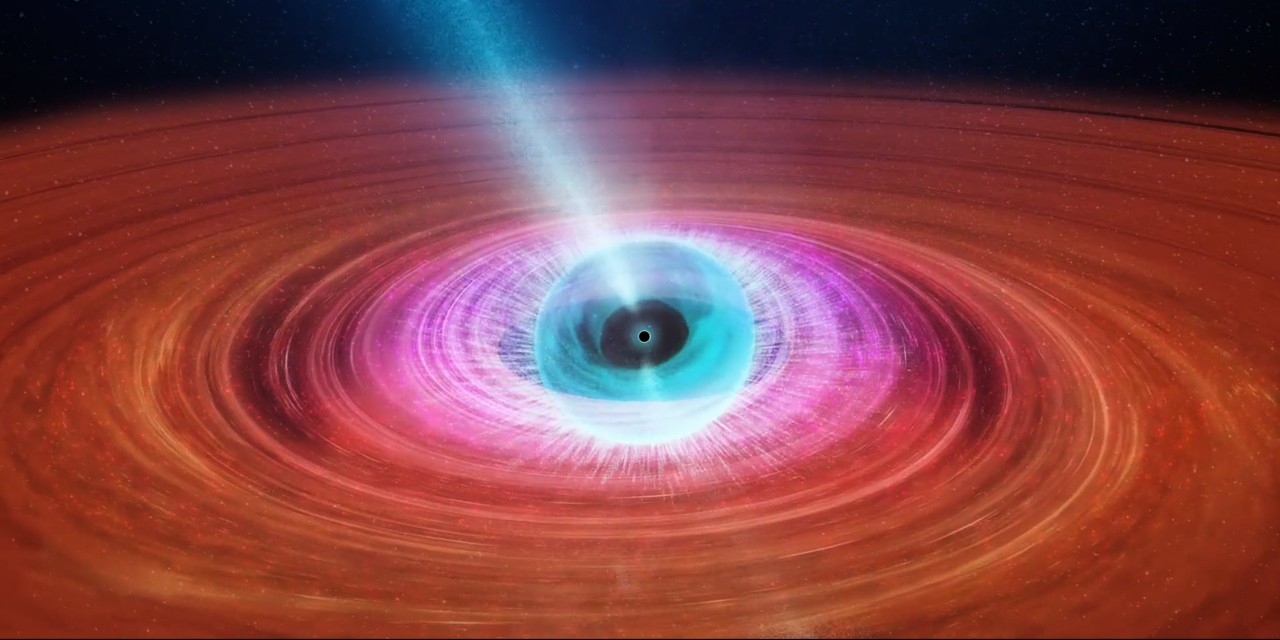 Conceptual image showing jets emanating from the black hole V404 Cygni. Material from a nearby star spirals in toward the black hole, whose inner regions are puffed up by intense radiation. The spinning black hole causes the inner disk to wobble like a spinning top, redirecting the jets as it does so. (Image: ICRAR)

An international team of astronomers, including researchers at the University of Alberta, discovered rapidly swinging jets emitted from a black hole, a behaviour never seen before.

“(When) we have a black hole and a nearby star, the gravity of the black hole pulls gas from the star into a disk which collapses inward,” explained U of A astrophysicist Gregory Sivakoff. “And when it ‘feeds’ in this way, the black hole can emit jets of material.”

The researchers used a network of 10 radio telescopes called the Very Long Baseline Array to observe the black hole V404 Cygni, almost 8,000 light-years from Earth, during an outburst of these jets in 2015.

The results show the jets from the black hole wobble around on a much faster time scale than scientists have seen to date—changing their orientation in a matter of hours.

Researchers had previously thought that jets emitted from black holes went in similar directions—but when they took a closer look at Cygni, they found something unexpected.

“What’s different in V404 Cygni is that we think the disk of material and the black hole are misaligned,” said lead researcher James Miller-Jones, associate professor from the Curtin University node of the International Centre for Radio Astronomy Research.

“This appears to be causing the inner part of the disk to wobble like a spinning top and fire jets out in different directions as it changes orientation.”

Study co-author Alex Tetarenko, who earned her PhD from the U of A and is now a fellow at the East Asian Observatory in Hawaii, said the speed at which the jets were changing direction meant scientists had to use a different approach from most radio observations.

“Typically, radio telescopes produce a single image from several hours of observation,” she explained. “But these jets were changing so fast that in a four-hour image we just saw a blur. It was like trying to take a picture of a waterfall with a one-second shutter speed.”

To solve the challenge, the researchers took a series of 103 images capturing about 70 seconds each. Miller-Jones and Tetarenko then led efforts to combine the images into a continuous video—a difficult task, as each image required its own careful analysis—but the result was worth the effort, illustrating the unique and unusual black hole behaviour.

“We were gobsmacked by what we saw in this system—it was completely unexpected,” said Sivakoff. “Finding this astronomical first has deepened our understanding of how black holes and galaxy formation can work. It tells us a little more about that big question, ‘How did we get here?’”

The study, “A Rapidly Changing Jet Orientation in the Stellar-Mass Black Hole V404 Cygni,” was published in Nature.