Canada Research Chair Darren Grant is looking into the darkest reaches of space to illuminate some of the universe's biggest mysteries. 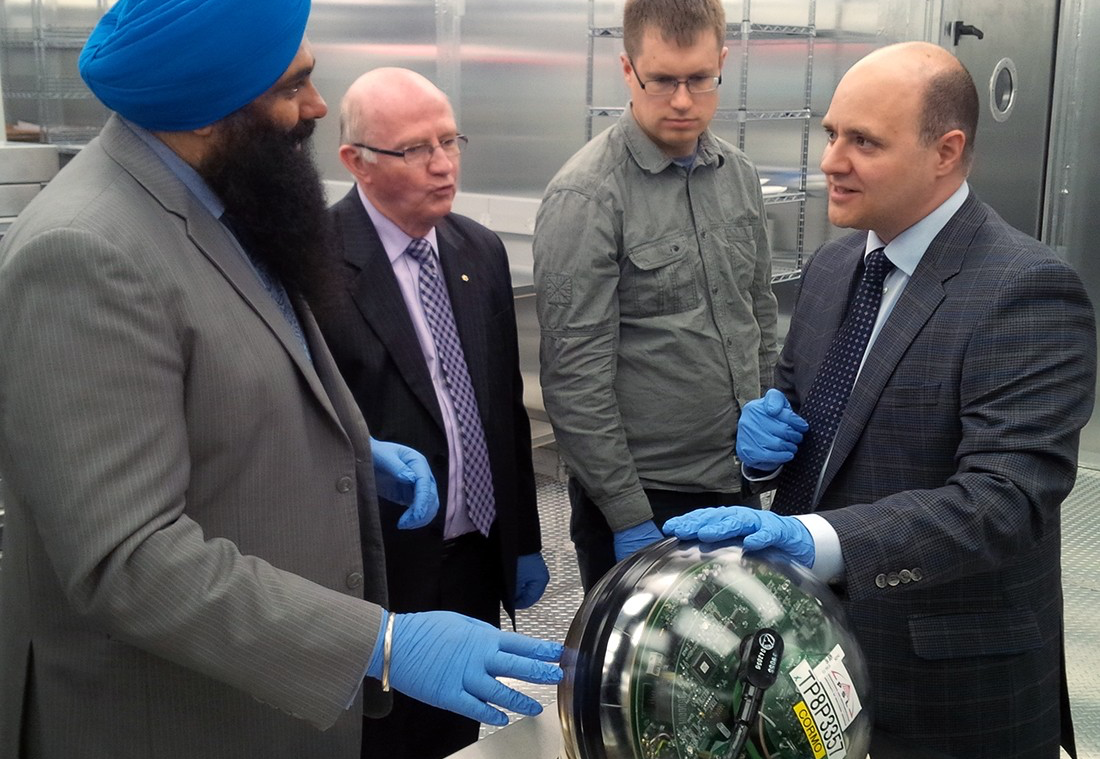 (From left) Minister Tim Uppal, U of A vice-president (research) Lorne Babiuk, and computing science professor Zachary Friggstad listen as Darren Grant demonstrates one of the IceCube digital optical modules during a tour of his astroparticle physics laboratory in the Centennial Centre for Interdisciplinary Science.

(Edmonton) The University of Alberta’s new Canada Research Chair in Astroparticle Physics is looking into the darkest depths of space to shed light on some of the universe’s biggest mysteries.

Darren Grant, a professor in the Department of Physics and the head of DeepCore, the low-energy extension of the IceCube Neutrino Observatory located in the Antarctic, has dedicated his career to detecting and understanding two of nature’s most elusive fundamental building blocks—neutrinos and dark matter.

“A neutrino is a subatomic particle, a foundational particle, from which the universe is made,” explains Grant. “They’re everywhere, billions of them passing through us every second—they go right through, and they don’t interact. But we don’t know very much about them. They are one of nature’s great mysteries to study.”

Grant’s work has played a role in discovering what we do know about the neutrino. His PhD thesis on the Sudbury Neutrino Observatory demonstrated that neutrinos have mass, providing the first evidence for physics beyond the Standard Model of Particle Physics.

He says his Canada Research Chair appointment is the next step in the design and construction of a new generation of neutrino detectors and helps further the U of A’s position in this field. “I consider myself very fortunate to continue to receive the support and encouragement from these programs that make it possible to further pursue our understanding of the neutrino and dark matter.”

The U of A is one of the four founding members of Canada’s National Laboratory for Particle and Nuclear Physics, a full member of the SNOLAB Institute, and Canada’s first IceCube collaboration institute.

Located at the South Pole, IceCube is the world’s largest neutrino observatory. It features a particle detector made of ice designed to detect the universe’s highest-energy phenomena. IceCube is credited with discovering the first evidence of neutrinos from outside the solar system and was named the 2013 “Breakthrough of the Year” by Physics World magazine for the way it is changing our understanding of our universe.

“The passion to better understand these particles—which continue to hold some of the universe’s best-kept secrets—creates the drive to design cutting-edge detector technologies to push this field to the limits of new discoveries,” says Grant, who led Canada’s contribution to the IceCube collaboration.

In developing these technologies, the researchers must venture to the most extreme environments on the planet, from the IceCube station in Antarctica to the SNOLAB facility in the depths of nickel mines in Sudbury, Ont.

“The University of Alberta offers an exceptional environment for research in astroparticle physics," Grant notes. "Our infrastructure for subatomic research at the U of A is second to none at Canadian universities, as are our technicians, technical resources and funding.”

Grant is one of four new Canada Research Chairs from the U of A announced in April, along with fellow Faculty of Science researchers Zachary Friggstad (computing science) and Todd Lowary (chemistry), and Michael Lounsbury of the Alberta School of Business. David Westaway’s existing chair in the Faculty of Medicine & Dentistry was renewed.

The university recently celebrated the $5.2 million in funding for Canada Research Chairs with a visit from the Honourable Tim Uppal, minister of state for multiculturalism, who took the opportunity to tour Grant’s particle-astrophysics laboratory for a first-hand demonstration of the highly sensitive specialized equipment.