Astrophysics grad sets her eyes to the stars 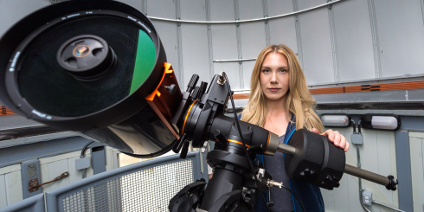 Kristen Cote in the U of A Observatory.
“

Physics has made me happy. It goes to that old saying, ‘If you do what you love you never work a day in your life.

From rocketry to satellites to weather balloons, Kristen Cote chose an adventure she hopes will take her all the way into space. 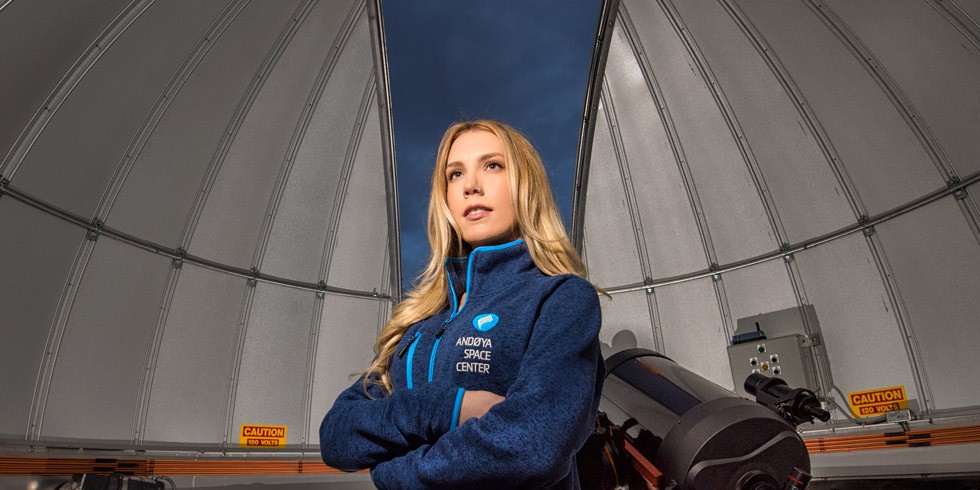 From launching rockets in Norway to helping build Alberta's first-ever space satellite, Kristen Cote has propelled herself toward her dream of reaching the stars. (Photos: Richard Siemens)

In a perfect world—a perfect universe—Kristen Cote would float weightlessly above the Earth and witness its blue majesty from space. The planet’s beauty amid the blackness has stopped more than one astronaut for long periods of introspection, so much so that the practice actually has a name: Earth gazing.

Given her odds, Cote knows it’s a journey that might not happen. But she can still dream—and meanwhile continue to amass an impressive array of skills and experiences along the way.

Sending a satellite into space? On it.

Getting a ham radio licence? (Like, who the heck does that anymore?) Cote does, apparently.

Launching weather balloons rigged with X-ray detectors to study electron precipitation in the atmosphere? It’s on the to-do list.

And that’s on top of earning a bachelor of science with honours in astrophysics from the University of Alberta.

Reach for the stars

With that kind of track record, maybe a NASA mission isn’t far-fetched. It would certainly fulfil a childhood dream dating back to a family vacation in Florida when she was 14. She begged her mom to go on a side-trip to the Kennedy Space Center and came away dreaming of the stars.

“More than anything, it was the astronauts’ stories, how inspiring each of those stories are. They had this dream and they wanted to achieve it,” Cote remembers. “That was a big part of it. But it also helped that space is just cool.”

As cool as space is, it didn’t seem practical as a career. In high school at Edmonton’s Archbishop O’Leary, Cote thought she might pursue a career in engineering but got turned on to physics thanks to a teacher’s enthusiasm for the subject. When it came time to choose a major at the U of A, she still thought engineering was the safer bet for employment.

Space won the day—or more accurately, the study of space and cosmic phenomena with a whole lot of physics.

“Astrophysics sounded cool, to be honest, so I thought, ‘Let’s just do it.’ And I did it,” she says. “I definitely don’t regret my decision. Physics has made me happy. It goes to that old saying, ‘If you do what you love you never work a day in your life.’”

That singular leap into the great unknown has exposed Cote to learning opportunities, friends and experiences she never imagined, including a chance to build rockets with other Canadian undergrads from Calgary and Saskatchewan as part of an exchange program with the University of Oslo in Norway called CaNoRock.

Almost by chance, Cote spotted a single poster about the program and was intrigued enough that she signed up—one of only two astrophysics students (most were from engineering). Students attended classes and got to go to Andøya Space Center while working with decommissioned rockets to learn about rocketry, telemetry, payloads and data analysis. She was on the team tasked with building an accelerometer and magnetometer, the latter used to study the Earth’s magnetic field.

“That was my first time soldering, and it didn’t go well for me but thankfully it went well for other people,” she laughs.

Beyond the science, CanNoRock was an opportunity to learn about another culture and the value of teamwork.

“Science nowadays isn’t just the one guy publishing … it’s this huge international collaboration on a bunch of projects. It’s good to get that kind of experience where you get to collaborate with people you didn’t necessarily know beforehand.”

From rocketry to AlbertaSat

The connections she made with CaNoRock led Cote down another path, to the AlbertaSat project—the U of A’s first student-designed satellite. Despite joining the project in its later stages, she jumped at the chance to work with about 40 other U of A students to create Alberta’s first-ever satellite, the Ex-Alta 1, scheduled to launch later this year.

She has served as co-lead of the mechanical team, working with 3-D modelling and drawings of the satellite to see how certain parts fit together. Her experiences even prompted her getting an amateur ham radio licence to come up with a plan for communicating with the satellite.

“Like, who gets a ham radio licence just for fun? There’s no way I would have done that.”

If she hadn’t participated in those projects, Cote likely wouldn’t have met Ian Mann, former Canada Research Chair in Space Physics and one of the faculty advisers for AlbertaSat, who has given her insight into the international space industry and her future studies. They ran into each other at a satellite advisory meeting, a conversation that led to a summer job.

“I just want to contribute to something in a big way, make things a little better before I leave.”

That summer work will see Cote work with the U of A’s David Milling and use X-ray detectors to study electron precipitation in the upper atmosphere. Milling and Mann believe they’ve found a low-cost way to study electron precipitation, which can damage orbiting satellites, using weather balloons outfitted with X-ray detectors. It’s a lo-fi version of NASA’s Balloon Array for Radiation Belt Relativistic Electron Losses, or BARREL.

It’s possible Cote could even participate in a BARREL mission, but at the very least she’ll have a hand in a launch even if it’s on a smaller scale.

That project should set up Cote for her next challenge: a master’s degree in earth and space science at York University.

At York, she will build a spectrometer and make it space-worthy for use on planetary rovers. She also hopes to help establish a satellite communication station on the ground as part of the QB50 mission with which AlbertaSat is affiliated.

Wherever the future takes her, Cote plans to do her part to advance the science. That may involve Earth gazing, or just gazing up at the stars.

“Everyone wants to be an astronaut, so I might as well be ready for that. But really, I just want to contribute to something in a big way, make things a little better before I leave.”

Astrophysics grad sets her eyes to the stars
Newsroom