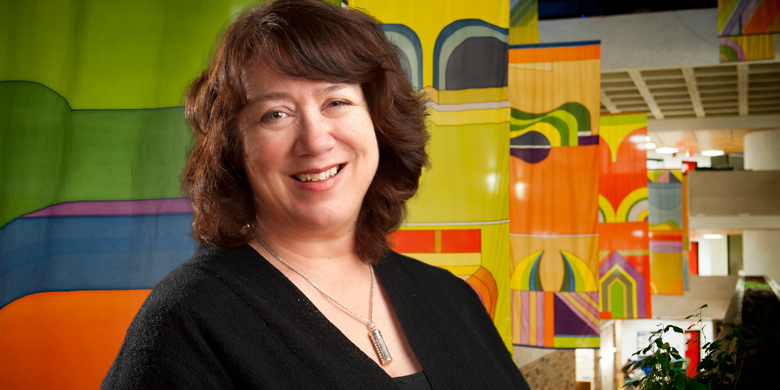 130118-marinaendicott-banner
Marina Endicott, UAlberta writer-in-residence for 2012-13, hopes to give new writers the same honest encouragement she had on the path to becoming an author. (Photo: Richard Siemens)

(Edmonton) The University of Alberta’s Writer-in-Residence Program, one of several bridges with the community, is also a breeding ground for aspiring authors in Edmonton. And its current resident writer, Marina Endicott, says she hopes to set younger writers on the same path she travelled almost three decades ago to becoming an author.

Endicott says some works by U of A students are just as good as the story she was encouraged to publish, which started her literary career.

At 28, Endicott was a theatre actor and director. But also she pursued a passion she kept from others.

“I had been writing stories secretly for a while. I didn’t know anything about the literary world, I only knew about theatre, so I just didn’t have any idea what to do when the stories were finished,” she recalls.

It wasn’t just the challenge of navigating the literary industry that once caused the world-renowned Canadian short story writer and novelist to stash away her stories in drawers.

“I think people don’t generally want to make fools of themselves,” she says. “I wasn’t hiding in the basement to write—but I wasn’t showing them to anyone.”

But after writing “Being Mary”—a story about a little girl who steals an eraser and feels so guilty about it, she thinks she can’t play the Virgin Mary in the school play—Endicott decided to face her fears and took the piece to Lois Simmie, the writer-in-residence at the public library in Saskatoon.

“I was quite afraid. I was scared that she would tell me that I shouldn’t be writing, that I was wrong to do this. But luckily she didn’t say that,” Endicott says.

Instead, Simmie encouraged her to submit the story for publication. “I sent it to Grain Magazine as she suggested, and they sent me a cheque for $90. In those days that was a lot of money, and I was pretty happy,” she says.

It was one of the best moments in her life as an author, she recalls. Now, in her own role as a writer-in-residence, she tries to help aspiring authors realize that experience.

“I’m hoping I can encourage students that same way. A few people have brought in pieces that are really great and close to finished, and poems that should be published already.”

She provides students with encouragement, just as she received on “Being Mary” back in 1986, by doing a close analysis of their work. Providing feedback on literary works is a delicate exercise that must be honest to be useful, she says.

“It’s a pleasure, and a great responsibility, to be that gate that somebody knocks on. I hope I’m taking that seriously and joyfully, and I am happy to see people and read their works,” she says. “The main job of a writer-in-residence is to make people want to write again, rather than to shut them down. I don’t think that anybody who comes in here would be met with, ‘You should not be writing, stop!’ I read to see what people are trying to do, and to help them do that well.”

Along with students, the U of A’s Writer-in-Residence Program also brings members of the general public to campus. Endicott has read works by high-school students, retired people and others working a day job while nurturing their creative spirits.

“A lot of the people I’ve seen are working, just like I was in those early days, but they’re writing all the time too. They may not know the literary world. This program can introduce them to its workings. And not everyone brings me a manuscript—some people just want to talk.”