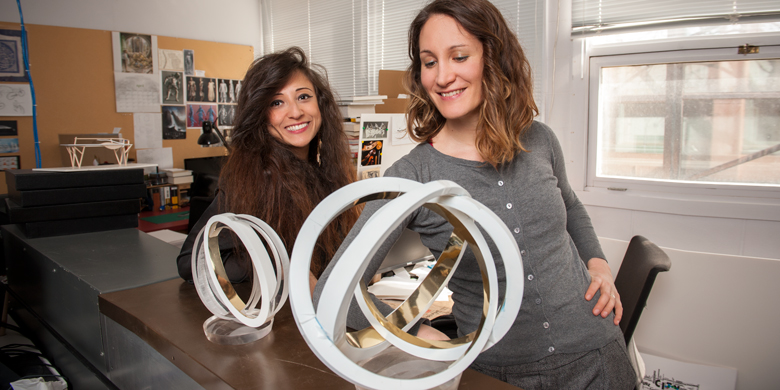 (Edmonton) Sun-splashed white winters and its northern location have inspired the design of the University of Alberta’s first-ever Community Connections Awards.

When the winners are honoured May 23 at Edmonton City Hall, they will each take home a white snowball-shaped sculpture created by two proud U of A Faculty of Arts students.

Ika Peraic and Layal Shuman, graduate students in the Department of Art and Design, won a homegrown competition over two other teams of classmates with their vision for an award that honours the U of A fabric and the university’s contributions to the larger community.

Perched on acrylic bases, the round, three-dimensional spheres feature an interior series of circles gilded with a golden hue. In creating the award, Peraic and Shuman wanted to visually tap into one of the university’s characteristic features: snow.

“We were inspired by the fact that snow covers the campus most of the year,” said Peraic. “It shapes the University of Alberta’s identity and creates a special experience for its community.”

The pair spun that into the idea of a snowball growing bigger as it gathers ice particles, reflecting the university’s mission of generating value through knowledge, and with that knowledge, keeping a promise of “uplifting the whole people.”

Peraic developed the design concept and worked on the prototype, then collaborated with Shuman on refining it and presenting it to an awards committee, which ultimately chose it as the winner.

The award’s shape represents the infinite circle of community, while the intersecting circles within send a message of connected communities. The polished golden surfaces, inspired by sunlight reflected off of snow, “represent the value of the community and the individuals winning the awards,” Shuman said.

Each of the three keeper sculptures is angled differently to celebrate individual recipients. “We wanted to show that the winners are equally valuable in their contributions, but also distinct from one another,” said Peraic.

A master copy of the award will be displayed by the university.

Peraic, who holds a degree in sculpture and industrial design from her home country of Croatia, and Shuman, who came to the U of A from Lebanon with a degree in graphic design, were honoured at the invitation of their instructors to take part in the competition.

“It’s wonderful that the university engaged us and created a connection with its own community of students and utilized our potential,” Peraic said. “It feels natural to have your work applied.”

The team was glad of the opportunity to design an award for the U of A. “We have many talented students here, and it is important for large universities like ours to work with its students on projects like this, rather than outsource it,” Shuman said.

Besides adding a special gem to their portfolios, Peraic added, "the experience relates to our design interests as they evolve around community projects and the potential embedded in the community itself."