Nicole Lugosi is alarmed by what she sees happening in Central Europe, but she isn’t surprised. 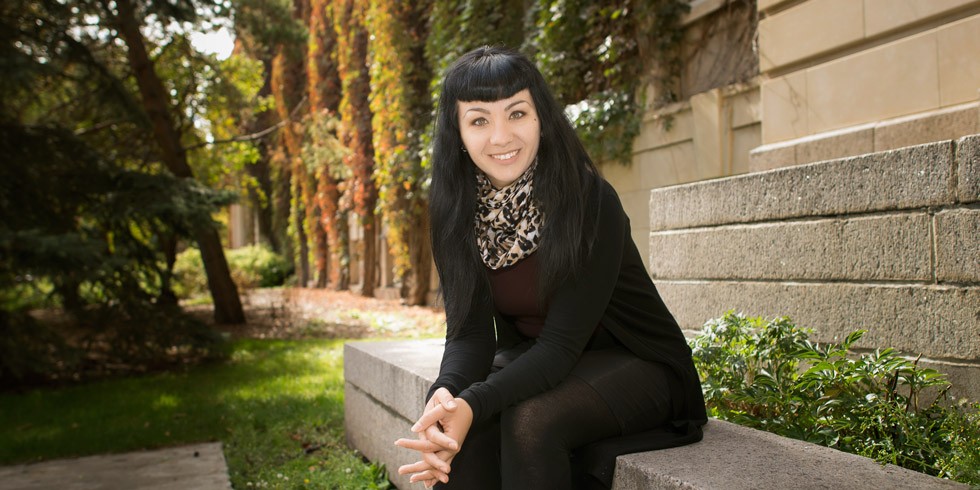 Political science student Nicole Lugosi, recipient of the BMO Financial Group Graduate Scholarship, is among the exceptional UAlberta students, faculty and staff being honoured at the annual Celebrate! event Sept. 23.

(Edmonton) Media coverage of the crisis that has seen thousands of people fleeing conflict and poverty in the Middle East and Africa arrive in Europe has also shed light on attitudes toward refugees and immigration in Hungary. Migrants who have crossed into Hungary from Serbia have found themselves subjected to tear gas and water cannons, corralled by police and detained in crowded open-air camps or train stations. Hungary has since sealed the border. The government of Prime Minister Viktor Orbán has left the provision of refugee services to non-governmental volunteer organizations while it erects billboards around Budapest telling immigrants they are not welcome.

This comes as no surprise to Nicole Lugosi, a graduate student in the University of Alberta’s Department of Political Science whose research has focused on nationalism and racism in Hungary since Orbán’s Fidesz party was elected in 2010.

“Some scholars would call it a resurgence of nationalism; some would say it was always there,” says Lugosi, whose research has earned her several awards including this year’s BMO Financial Group Graduate Scholarship. Lugosi is among top faculty, students and staff being recognized at the U of A’s annual Celebrate! Teaching. Learning. Research. event being held at the Myer Horowitz Theatre Sept. 23. Everyone is welcome to attend.

“What makes Hungary an interesting case is, after 1989, they were considered a star performer [among former Eastern Bloc countries] of democratic transition. When you look at the democracy checklist in terms of a constitution, minority protection laws, strong institutions, different political parties—they met all the criteria.

“But from 2010 onward there’s been a widely criticized shift to the far right with Viktor Orbán’s government. Other parties, such as Jóbbik—which even has seats in the European Parliament—sound strikingly similar to Hitler’s National Socialists in 1933 in Munich with overtly racist dialogue. Jóbbik has made it clear they believe Hungary is for ‘Hungarians’ and that Roma, Jews and other minority groups don’t belong. Their stance on immigration is not much different, insisting that people of other ethnicities and religions don’t belong in Hungary and are stealing Hungarian jobs.”

“Other parties, such as Jóbbik—which even has seats in the European Parliament—sound strikingly similar to Hitler’s National Socialists in 1933 in Munich with overtly racist dialogue.” —Nicole Lugosi

Lugosi says her research focuses on how political parties are framing policy in three areas related to the Roma minority, to immigration policy and to ethnic Hungarians living in the seven countries that border Hungary. She says there’s a profound disconnect between Hungary’s stated policies on human rights and minority rights and the way these policies play out in reality. Anti-Roma, anti-immigrant and anti-Semitic sentiment have become part of political discourse, with the popularity of the far-right Jóbbik party forcing Fidesz to adopt more extreme stances to maintain power.

“When people think about racism or ethnic clashes, they think about extreme cases like Nazi Germany,” Lugosi says. “But what we’re seeing today is an institutionalized, very structural type of racism, where people are being discriminated against in more nuanced ways, which is almost more dangerous because such beliefs become an unquestioned part of the ‘way things are’ and that certain people deserve a home or don’t, deserve an education or don’t.”

Lugosi, who hails from Winnipeg, says her undergraduate research focused on sex trafficking in Europe. Her present research builds on her interest in Central Europe since the Second World War, her own Hungarian heritage and issues around racism in Canada.

She notes that discrimination against Roma people isn’t restricted to Europe. A study released earlier this year by refugee-law experts at York University showed that Hungarian Roma refugee claimants in Canada faced systemic discrimination at the hands of lawyers, politicians and the government. Of 11,000 refugee claims made by Roma between 2008 and 2012, only 8.6 per cent were successful.

“Up until a couple of years ago, Hungarian and Czech Roma were the top refugee claimants in Canada,” Lugosi says. “However, the same negative stereotypes and discourses about the Roma—that they’re lazy, that they’re troublemakers and so on, not dissimilar to racialized constructions of Aboriginal people here in Canada—followed the Roma to Canada. Then Hungary was put on the safe country list for refugees, meaning that people from Hungary cannot make a legitimate political refugee claim. This is alarming because there has been a rise in violence [against the Roma] and nationalist movements, with many Roma living in substandard third-world conditions, yet they can’t claim refugee status.”

Similarly, the increase in nationalist, anti-immigrant political rhetoric and its real-world impact aren’t exclusive to Hungary. Lugosi says it’s important to expose the gaps between official policy and reality as these nations take their place in the global community.

“We should be looking at the wider implications of Hungary’s transition to democracy for countries around Hungary and abroad. Certainly in the region, the right-wing politics of other Central European countries are also in the news,” Lugosi says.

“It’s a troubling pattern and bad news for a healthy democracy when there are large groups of people who are discriminated against and don’t have the same opportunities as everyone else. This is in complete contrast to the spirit of the European Union. Legal rights on paper are a good start but they really aren’t enough—what matters is what happens on the ground.”