Award-winning playwright set to take up residence at UAlberta

Colleen Murphy aims to provoke theatre audiences and students as university's next Lee Playwright in Residence. 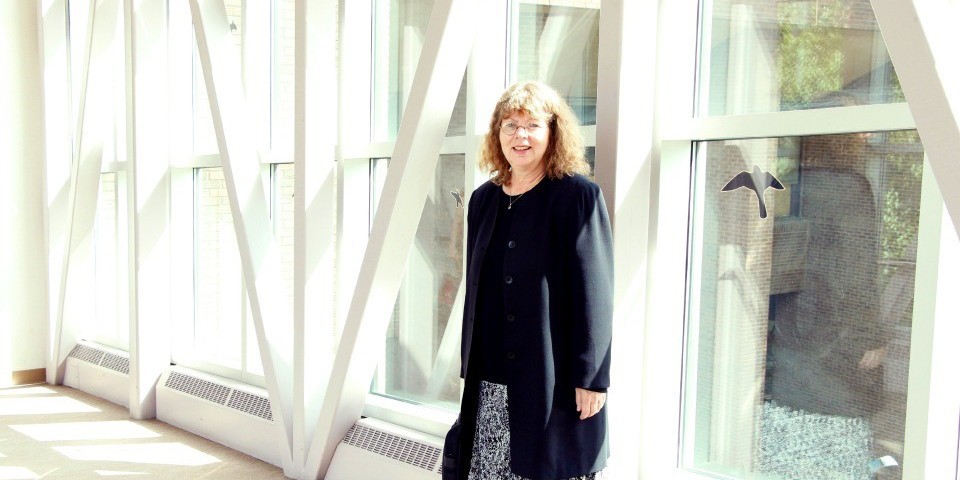 (Edmonton) Award-winning playwright, filmmaker and librettist Colleen Murphy is set to hit the Edmonton arts ground writing in her signature bold strokes when she arrives at the University of Alberta in September 2014 as the Department of Drama’s next Lee Playwright in Residence.

Murphy will be in residence at the U of A for two eight-month terms over three years, from September 2014 to April 2015 and September 2016 to April 2017. As part of her playwriting residency, she has accepted a new play commission, with the work projected to premiere in the winter of 2017.

The Lee Playwright in Residence, established in 2005, was the first of its kind among Canadian universities. It was made possible by a generous legacy endowment created by the Clifford E. Lee Foundation. The residency offers an opportunity for Canadian playwrights to devote time to their writing and to make a significant contribution to new play development within the university and professional theatre community in Edmonton.

As the fourth Lee Playwright in Residence, following Greg MacArthur (2011–2013), Kevin Kerr (2007–2010) and Don Hannah (2005–2007), Murphy says she’s eager to build on the strong ties with the Edmonton theatre community that she’s forged in recent years as a regular guest playwright with the Citadel Theatre’s Playwrights Forum run by Brian Dooley.

“It was through that forum I started to meet the wider Edmonton theatre community: actors, directors, playwrights, larger companies like the Citadel, independent smaller companies that were trying to get plays off the ground,” explains Murphy. “It’s so much better going into a position like the Lee Playwright in Residence being able to hit the ground running, making connections, rather than spending two or three months trying to figure out who is who. I feel excited to offer some specific ideas already.”

Born in Rouyn-Noranda, Que., and raised in northern Ontario, Murphy is best known for dark, imaginative works such as her 2007 Governor General’s Award-winning drama The December Man, set in the aftermath of the 1989 Montreal Massacre, and Beating Heart Cadaver, where Murphy ventures through the dark emotional territory of two parents grieving their young daughter killed in a car crash (also nominated for a Governor General’s Award). Shortlisted for the 2008 Siminovitch Prize in Theatre, Murphy has challenged audiences and continues to propel the theatre form forward.

Murphy’s Armstrong's War, nominated for a Jessie Richardson Award for Outstanding New Play (Vancouver), is being produced this fall at the Royal Manitoba Theatre Centre in Winnipeg and at Edmonton’s Theatre Network as part of their 40th anniversary season. The Canadian premiere of Murphy’s play The Goodnight Bird opens in January 2015, a co-production with the Kay Meek Centre in Vancouver and the Centaur Theatre in Montreal.

Edmonton audiences won’t soon forget Murphy’s provocative Pig Girl, which takes the public events around murdered and missing women in Vancouver as a jumping-off point. The play imagines a kidnapped woman struggling to yank her life back from a serial killer while her desperate sister and a haunted police officer reach across time and distance to try and rescue her. Pig Girl premiered at Theatre Network this past season, garnering a 2014 Elizabeth Sterling Award nomination for Outstanding New Play.

"That there are pockets of risk and daring in Edmonton is to be applauded. And hopefully that risk is supported by the greater community, including the university community.”

“Pig Girl is a very dark, difficult play,” Murphy says. “Theatre companies across Canada don’t quite know what to do with it. But not in Edmonton. The premiere at Theatre Network was among the most brilliant premieres of my work to date. On one level—and it is a level that I really like—Edmonton is, at heart, a working-class town. Theatre has not yet been completely co-opted by the intelligentsia. There’s that rough-around-the-edges element in the ecology of Edmonton theatre, and in that roughness and in that curiosity, there’s still opportunity for theatres to take risk.”

In the wider picture of North American theatre, Murphy says risk is hard to come by.

“Everyone struggles with dwindling audiences. Theatre is in competition with many different forms of entertainment or ways to watch and experience things. Many theatres have to lessen their risk to keep going and that is completely valid. To take a risk is actually a pretty big deal nowadays. That there are pockets of risk and daring in Edmonton is to be applauded. And hopefully that risk is supported by the greater community, including the university community.”

Good to prod, good to be prodded

Though the Lee Playwright is invited to visit university classes and consult with students, it is not a formal teaching position. Outreach to the theatre community is the emphasis—something that pulled Murphy to the post, having enjoyed previous resident playwright posts at the Factory Theatre in Toronto, the Finborough Theatre in London, UK, and at the University of Guelph.

She describes mentorship as a two-way street.

“I can be stimulated by students and I can stimulate them. I don’t have to present to them a kind of concrete or institutionalized view of the theatre. That’s the greatest advantage of having a playwright in residence or a writer in residence. You are in a position where you bring something to the university setting—you bring all your experience. But, as an outsider, you are also able to bring questions. You can probe. You can pry. You can poke. And that’s OK—that’s part of your job and it is a necessity in all artistic endeavours.”

Award-winning playwright set to take up residence at UAlberta
Newsroom