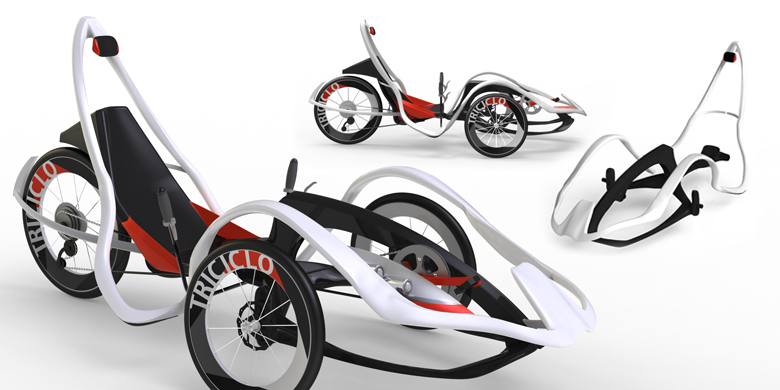 121123-triciclo-banner
The sleek lines and technological finesse of the Gran Turismo concept won its creators the best overall design award in the student category at the International Bicycle Design Competition.

(Edmonton) Four University of Alberta students faced a daunting challenge. Could they redesign a $7,000 recumbent tricycle their client says is representative of precision German engineering? The client—an engineer with a lifetime of experience building race cars—also wanted to be surprised.

Their answer, Gran Turismo, is receiving worldwide attention after it won best overall design in the student category at the 16th annual International Bicycle Design Competition.

“By winning our category, we’re guaranteed two trips to Taiwan,” said Paul Czarnietzki, one of the students. “We will go to Taichung for a workshop, and talk about our design to bike engineers and designers. And then our design gets resubmitted to the Taipei International Cycle Show in March 2013 to compete for a grand prize.”

Czarnietzki and his fellow team members of Triciclo Design—Mina Lee, Justin Chan and Andrew Lesniak—originally developed the concept as a senior industrial design project. They credit their success to an industrial design teaching philosophy that has produced similar remarkable results. As Lesniak puts it, instructors give students adequate time to keep pushing ideas.

“They support students even when we don’t come up with the greatest idea. They support failure, almost: try and try again,” he said. “I think that’s key in developing creativity—having the chance of constructive criticism and lots of opportunities.”

Another foundation for the team’s success was laid four years ago when their client, mechanical engineering professor Curt Stout, met industrial design professor Cezary Gajewski. The duo then planned a merger of their senior design classes.

“Our grand experiment, never done before in the engineering faculty, created amazing results,” says Stout, who offered his HP Velotechnik Scorpion fs recumbent tricycle to the students as inspiration and served as client, sponsor and engineering mentor.

“It’s a beautiful piece of functional German engineering, but I thought it would be interesting to see what Cezary’s industrial design students could do with it,” he said. “Their simple design objective was to conceive a visually exciting trike that is seriously fun to ride and cool, beautiful to behold, incorporates cool technologies, and surprises me. Their design is sublime.”

Along with the cool factor, Czarnietzki says the team’s design is also safer for the rider.

“We created a rib-cage exoskeleton providing protection during small impacts or collisions. And we included skid plates, so if someone’s doing a really sharp turn, they won’t roll over,” he explained. “Another feature is high-efficiency LED lights that are powered while pedalling.”

As the students travelled to Taiwan Nov. 21, their mentor—who says riding a bicycle is impossible for him because of multiple back surgeries—is making good on a promise to them.

“I promised that if they conceive it, I would make it a reality. And I intend to build their design. I’m currently finishing a 900-sq.-ft. machine shop to tackle this project,” Stout said.

He adds that Gran Turismo exemplifies what results from removing the artificial schism between engineering and art. “My dad was a fighter pilot, artist, musician and trained engineer. So I grew up in a household where there was not a dichotomy between art and science; we painted, played music, built race cars and airplanes. I brought this ethos when I started teaching at the university.

“These students have delivered, beating 590 entries from 45 countries and winning a prize that categorically proves their success at this university.”