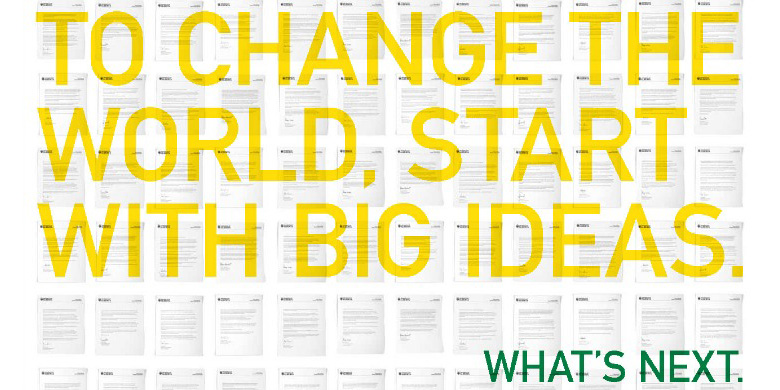 130222-whatsnext-banner
UAlberta's "What's Next" campaign aims to raise awareness across Canada of the amazing accomplishments happening here and now at the university.

(Edmonton) Over more than a century pursuing excellence in their chosen fields, the University of Alberta’s faculty, staff, students and alumni have built an international reputation that precedes Alberta’s flagship post-secondary institution.

And while the past triumphs that weave the university’s unsurpassed reputation are known far and wide, creating awareness of the here-and-now accomplishments being played out in labs and classrooms across the U of A spectrum is discovery’s biggest challenge.

To meet this challenge, the university embarked on a campaign entitled “What’s Next” Feb. 11 in an effort to raise awareness of the University of Alberta across Canada.

The campaign is using print and out-of-home advertising, online advertising and radio, and will be featured in such publications as National Geographic, Globe and Mail, Vancouver Sun and Maclean’s. The letters are being showcased on large posters and banners on elevators in the Toronto airport and other targeted business buildings.

“Competition among research universities is aggressive, with many institutions using paid media to position themselves,” said Debra Pozega Osburn, U of A vice-president of university relations. “In recent memory, this is not something the University of Alberta has done in any significant way.”

Pozega Osburn says the What’s Next campaign connects to the university’s promise of “uplifting the whole people” by fostering awareness in some people who might not be aware of who we are and what we do at the U of A.

“Awareness is the starting point of reputation,” said Pozega Osburn. “A good reputation is the foundation of securing the talent and the resources we need to deliver on our missions of teaching, research and service.”

She says the campaign will not focus on past achievements, but will shine a light on those pursuing “What’s Next.”

At the heart of the campaign is a series of letters in which members of the campus community describe the amazing projects they are working on and why they matter, all while explaining the university community's vision for the future and highlighting the U of A's provincial, national and global impact.

Some examples of the stories the campaign focuses on include Sirish Shah, who has taken his imaging technology intended for improving oilsands sustainability and used it to diagnose malaria; Crystal Theodore, an undergraduate student and member of a team that is taking paper no longer suitable for recycling and converting it to useful compounds like those required for the anti-flu drug Tamiflu; and Kris Wells and the work of Camp fYrefly and the No Homophobes campaign.

All advertising will direct viewers to the What’s Next website, which hosts a series of two-minute videos with members of the campus community telling their own story of What's Next. Videos will be added throughout the campaign.

“Fostering pride and understanding in an institution like the U of A is important if people are to understand how relevant the University of Alberta is to their daily lives,” said Pozega Osburn. “This is something that modern universities need to do today to stand out from the sea of information and reach people in a way that allows them to understand how important we still are to them.”

Find out more about What's Next

View campaign materials for What’s Next