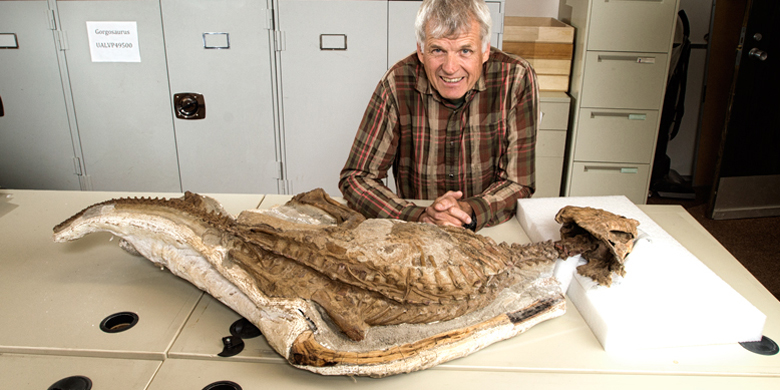 131127-babybanner
U of A paleontologist Philip Currie displays the pristine, near-complete skeleton of a baby Chasmosaurus, a relative of the Triceratops, he found in Alberta’s badlands.

(Edmonton) Philip Currie has made some spectacular and rare fossil finds while dino hunting in Alberta’s badlands, so when he says a discovery ranks among the best of his career, it’s significant.

The internationally renowned University of Alberta paleontologist unearthed a remarkably preserved, near-complete skeleton of a baby Chasmosaurus belli. It’s the first time anyone has found a baby of this species intact in 150 years of digs at Dinosaur Provincial Park—or anywhere for that matter.

That makes Currie one proud papa.

“It’s pretty exciting. It’s a super specimen and I’m very lucky to be the guy that found it,” said Currie, Canada Research Chair in Dinosaur Paleobiology in the Department of Biological Sciences. “There’s no question this is one of the very best ones I’ve ever found.”

The Chasmosaurus was a horned dinosaur once commonly found in Alberta’s badlands, a relative of the Triceratops. Currie estimates the 1.5-metre-long fossilized baby was about three years old when it died, possibly from drowning, 72 million years ago.

He found the specimen in 2010, high up on a steep hillside after spotting a piece of skull protruding from the Earth. At first he wasn’t sure if it was the horned ‘frill’ of a dino skull or a turtle, but a day’s worth of digging confirmed the specimen’s significance. It took another three years of painstaking work before it was ready to showcase to the world.

The skeleton is fully intact minus the arms, which Currie says were likely eroded away by a sinkhole several thousand years ago, making it even more remarkable the rest was so well preserved.

The dino immediately becomes “one of the top three star pieces” of the U of A’s Laboratory for Vertebrate Paleontology, a collection that includes more than 50,000 specimens ranging in age from 450 million to 10,000 years old. The collection is actively used by researchers and students, and there’s no shortage of potential studies that can be done on the Chasmosaurus, Currie said, from looking at how dino skin ages to weight changes over its lifespan.

“It’s an opportunity to learn something about a dinosaur that has broader implications for the whole scientific community worldwide,” he said. “There’s almost an infinite number of projects when you have an invaluable specimen like this.”

For more on the university's expertise in dinosaurs, stop by the Paleontology Museum at UAlberta.

The public will get a chance to see a whole lot more of the baby Chasmosaurus in January, when a new round of classes begin for Dino 101, the wildly popular massive open online course led by Currie. The specimen will feature prominently in course material, providing a “sterling” example for teaching about dinosaur biology, including differences in appearance from juveniles to adults, he said.

“We’ll use it as an example of how certain features like the frill in Ceratopsian dinosaurs are almost certainly developed as display structures,” he added. “They are things that are not so important and much smaller in the babies, but in a large sexually mature animal develop into these very bizarre structures.”