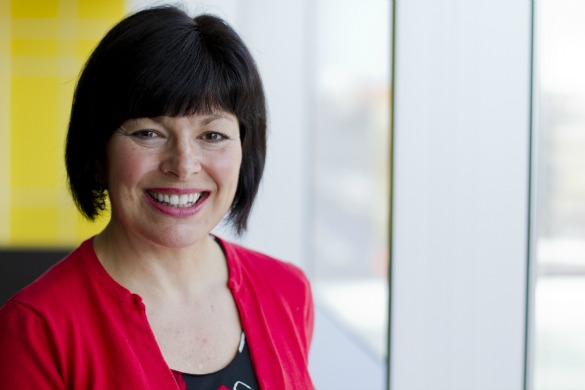 130321-kimraine-banner02
Kim Raine is lead author of recommendations by a panel of obesity experts calling for the Canadian government to ban food and beverage ads that target children.

(Edmonton) Researchers from the University of Alberta are leading a charge among Canada’s obesity experts and calling on the federal government to ban food and beverage ads that target children.

Kim Raine, a professor with the Centre for Health Promotion Studies in the School of Public Health at the U of A, says governments need to take action to stem the rising obesity epidemic. The only exception to a proposed food and beverage marketing ban would be for approved public health campaigns that promote healthy eating.

“Restricting marketing is not going to be a cure for childhood obesity, but it’s one step in a multi-pronged approach to creating an environment where the healthy choice is the easy choice,” said Raine, lead author of new consensus recommendations calling for the ban.

“Right now, it’s the flashy, highly marketed, ‘fun,’ high-sugar and high-fat foods that are the easy choice. Kids see them and want them, and parents’ efforts to encourage their kids to eat a healthy diet are undermined.”

The recommendations were developed by leading Canadian and international obesity experts at an obesity conference held in Montreal in 2011. They were published last month in the peer-reviewed Journal of Public Health Policy, in an early online release.

More than five million Canadians are considered obese, including 500,000 children, and the number of kids who are overweight or obese has more than doubled since the early 1980s.

That’s a trend Raine says cannot continue without overloading the health-care system—80 per cent of costs are associated with obesity-related chronic diseases such as heart disease, Type 2 diabetes, stroke, high blood pressure and certain cancers. Obese children are more likely to become obese adults, she said, meaning the rates of these preventable chronic diseases are only going to rise.

“Without investing in strong prevention efforts, like the proposed ban, the health system is not sustainable,” she said.

Raine and the consensus panel said there are important lessons to be drawn from the ban on tobacco advertising to minors, which has helped cut smoking rates. The rest of the country can also learn from Quebec, which since 1980 has banned all marketing to children under 13 years old—legislation that withstood a Supreme Court challenge in 1989.

The panel, which also included U of A researchers Timothy Caulfield and John C. Spence, is also calling on government to create a regulatory body that would ensure children are protected from exposure to food ads. The body would be required to create minimum standards for food marketing, monitor companies for compliance and impose penalties when necessary.

Though some may view marketing bans as a heavy-handed approach, Raine notes the food industry has deep pockets that governments and public health advocates cannot come close to matching. Food advertisements appear not only on TV and in schools, but also on the Internet; in video games; through sponsorships, product placements, emails and brand mascots; and even through viral marketing.

“It really is about trying to set a more level playing field because the healthy choices aren’t being promoted well. They’re getting buried, they’re getting lost in an ocean of flashy marketing.”

The panel’s work was funded by a grant from the Canadian Institutes of Health Research.