Barking up the wrong tree 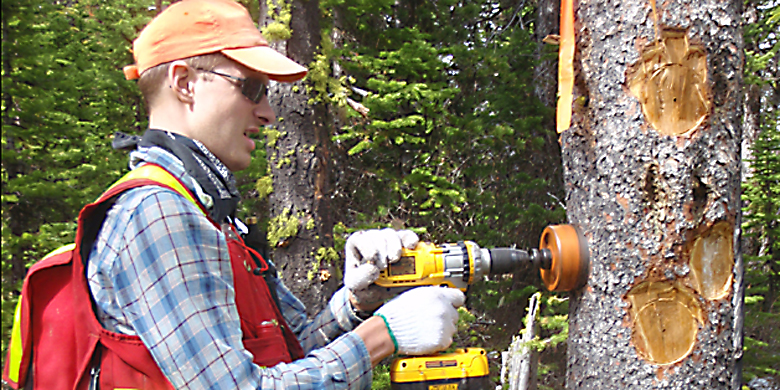 120308-whitebarkbanner
Evan Esch has been tracking the destruction of Alberta's whitebark pine by the mountain pine beetle.

(Edmonton) Besides attacking North America’s lodgepole pines, a combination of climate change and the mountain pine beetle are threatening to wipe out the remaining population of Alberta’s whitebark pine—a tree endangered across North America.

Research conducted by Evan Esch for his master’s thesis shows that temperatures are rising in the cold mountain elevations where the whitebark pine grow, creating ripe conditions for the destructive beetle to spread.

As well, the tree species has already been decimated by white pine blister rust, a fungal infection carried from Europe 100 years ago, making for a “devastating one-two punch,” said Esch, whose research is based in the University of Alberta’s Department of Renewable Resources.

“There are a small number of trees that have resistance to the fungal disease, but we are concerned that the mountain pine beetle will kill them off. Areas that were historically climactically unfavourable to the beetle are becoming better for them, even at higher elevations and northern latitudes in Alberta.”

The tree grows in high elevations along the Rocky Mountains through to the coastal ranges in western North America, including Alberta, British Columbia, Montana, Idaho, Washington and California. Whitebark pine can live up to 1,000 years. It provides nutritious seeds crucial to the diet of birds, black bears and grizzly bears and is often the last species at the treeline, where it regulates snow melt and stabilizes shallow sub-alpine soils in the mountains.

Esch studied the life history traits of the mountain pine beetle in whitebark pines, exploring the question of how well the insect reproduces in this type of pine.  “Even though the tree isn’t as well suited to the beetle here because of Alberta’s cooler climate, the insect is still capable of killing whitebark pines and will still produce large broods in the oldest, most developed of these trees,” Esch said.

“In both the short and long term, it means the mountain pine beetle will kill more of these trees.”

Whitebark pine, made more vulnerable than lodgepole pine due to white pine blister rust, has consequently been listed as endangered by the Committee on the Status of Endangered Wildlife in Canada.

A recent survey of the whitebark pine in Alberta showed that the white pine blister rust was found in 98 per cent of stands examined and that 60 per cent of the trees were either already dead or infected and dying.

Esch’s findings will help improve forest management practices, namely by showing that cutting and burning of beetle-infested whitebark pine should focus on the largest diameter trees.

Though he grew up as a city boy, Esch, 26, felt drawn to studying the problems of the forest, and found the plight of the whitebark pine compelling. “The notion that this rugged, remote tree could go extinct in my lifetime is startling, since I think of the Canadian wilderness as an endless sea of trees. However, the feeling that my work could contribute to the conservation and recovery plans for this species definitely made all those long days and nights in the lab easier.”

Esch’s work was funded through grants from the Natural Sciences and Engineering Research Council of Canada, the Alberta Conservation Association, Foothills Research Institute and Alberta Parks, and is a collaborative project with the U of A, Canadian Forest Service and Alberta Sustainable Resource Development.

Barking up the wrong tree
Newsroom