History shows the acceptance of violence, playing through pain are values passed on by hockey players for more than a century, say U of A experts. 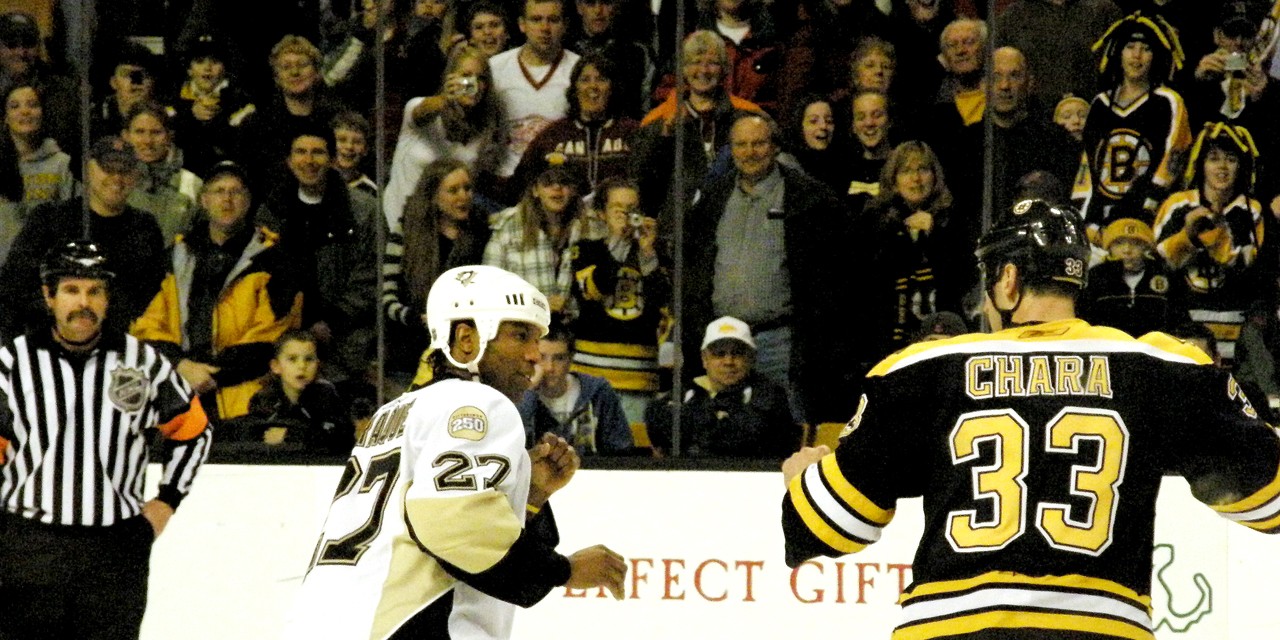 A history of fighting in hockey helped engender a culture of toughness and playing through pain, which exists to this day. This mentality is part of the challenge in trying to reduce head injuries in the sport, according to U of A experts. (Photo: Wikimedia Commons)

In January 1907, Montreal police arrested Alf and Harry Smith along with Baldy Spittal, all members of the Ottawa Silver Seven hockey team, in connection with a violent on-ice stick attack carried out against three players of the Montreal Wanderers.

Spittal and Alf Smith were not suspended by the league but were found guilty of assault and fined $20 and $19 respectively. However, the charges against Harry Smith were dropped, thanks in part to some less than incriminating testimony offered up by his alleged victim, Ernie “Moose” Johnson.

According to a Montreal Star reporter covering the trial, Johnston said he was “. . . struck by a blow coming from somewhere, he couldn’t tell where, and delivered by someone, he couldn’t tell who. He never lost consciousness, he did not fall on the ice because the blow knocked him out, [but rather, when he lay on the ice] it was simply to keep the blood from running onto his clothes that he remained prone on the ice.”

Johnson’s reluctance to testify against his attacker is, according to Stacy Lorenz, a hockey historian with the University of Alberta’s Augustana Campus, part of a culture that supported and justified violence in hockey that still persists more than a century later.

“We are suggesting that the behaviours and approach of hockey over 100 years ago taught people how to respond to injury, with the same expectations today as there were then.”

Lorenz, along with his colleague, Augustana sociologist Geraint Osborne, presented their socio-historical approach to hockey at The Hockey Conference - Edmonton 2018 held at the U of A over the weekend.

“Although injuries in sport continue to be treated mainly as a scientific, medical, or technological problem, we argue that a sociological and historical approach would help us understand current issues around health and injury, especially concussions,” he said.

Lorenz’s recent work looks at violence in hockey in the early part of the 20th century, which featured murder trials of two players who stood accused of killing opponents with their hockey stick. In each case, the offending player was acquitted largely because such violence was deemed intrinsic to the sport.

“It’s not just violence itself, but also how people respond to violence, and what the expectations are in terms of dealing with injury—playing through pain, withstanding punishment, just persevering,” he said.

Lorenz noted he has early 20th century newspaper clippings that show the gendered expectations of “manly hockey players” being required to “take their taps like men.”

“And if you couldn’t, that was obviously a sign of weakness, softness and what they called in the early 20th century ‘a squealer,’” said Lorenz. “When you did complain that a team was too tough, then you are not living up to the standard of what we expect from a hockey player.”

Lorenz said a great example of this came on Dec. 4, 2016, when Connor McDavid was removed from a game by one of the league’s concussion spotters after the star forward fell and bounced his chin off the ice. McDavid, teammates, the media and fans alike questioned the wisdom of the decision and wondered if perhaps the players shouldn't have more say in whether they are fit to carry on.

After all, “it’s a man’s game,” said his then-teammate Patrick Maroon.

“They’re saying the same things that people have been saying for more than 100 years,” said Lorenz.

He added he has quotes from Gordie Howe suggesting the same thing after a reporter asked him for his thoughts on the growing violence in the sport 70 years ago.

“Howe asked the reporter what else did he expect? This is a man’s game,” said Lorenz. “Those are some of the expectations we need to challenge if we are going to get a better handle on reporting and preventing head injuries.”

Lorenz also pointed a letter former NHL defenceman Nick Boynton penned for The Players’ Tribune, where he talked about how hockey socializes you into a belief system that you need to persevere through injury and even fear.

“This helps to explain why it’s so difficult to change this, why despite our increasing knowledge of how dangerous things can be, it still persists and it is really hard to get rid of it,” said Lorenz.

The NHL has worked in recent years to rid itself of dangerous play and instill an openness regarding injury, especially concussion. However, team owners and a lengthy list of former players now stand at the outset of what appears will be a long, drawn-out lawsuit that alleges the league has been willfully negligent with its approach to head injuries.

Lorenz admits it’s a very difficult situation because of this culture based in on-ice tactics that often involved and celebrated violence.

“I think the piece that was missing was an understanding of what the long-term consequences could be. I think there is enough evidence now to suggest that, at some level, this is doing long-term damage and that there should be more action taken to prevent concussions and other head injuries.”

He added, “In the past, when you combine a lack of understanding of outcomes with a deep culture of expectations of playing through pain and not showing weakness, then you can see why we got to where we are now.”