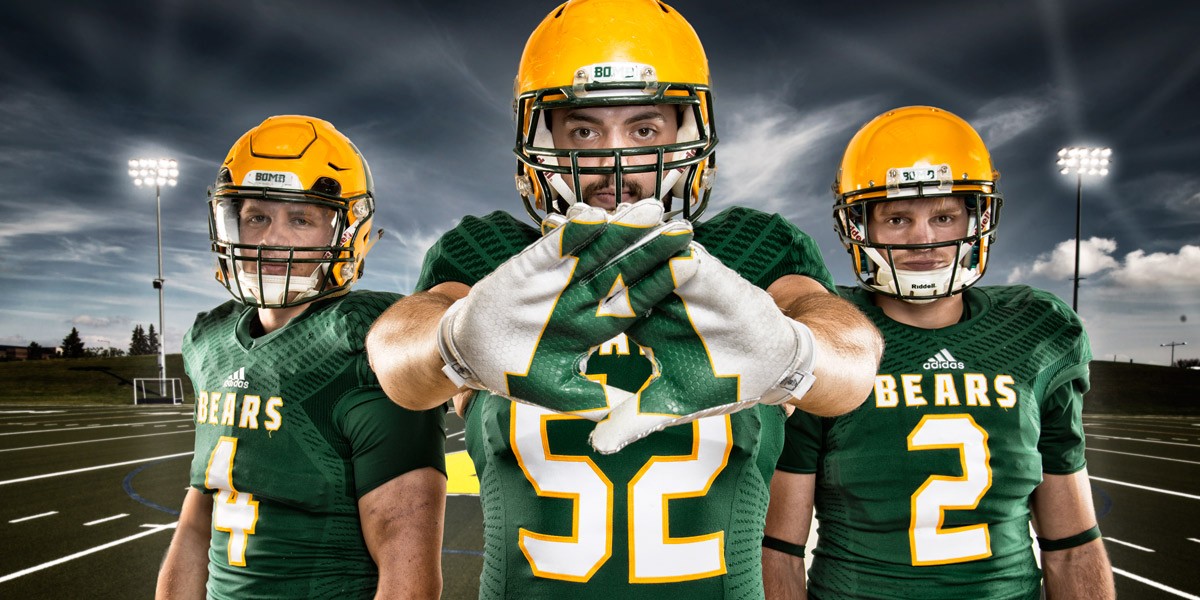 The Golden Bears are ready to defend their brand-new home turf at Foote Field.

The University of Alberta Golden Bears football team will christen their brand-new turf at Foote Field when they clash with the Saskatchewan Huskies on Friday, Sept. 11, at 7 p.m.

Alberta is 1-0 to start the 2015 season, following their season-opening 29-22 win against the Rams last Friday at Mosaic Stadium in Regina. It marked the Golden Bears’ first season-opening victory since 2010—the last season the Bears made the playoffs.

The Huskies, meanwhile, come into Edmonton with a 0-1 record after they suffered a 34-28 defeat at the hands of the Manitoba Bisons in Saskatoon.

Friday night’s game is a “Legacy Game,” which means the first 300 fans to Foote Field will receive a free T-shirt. It's also free for students who bring a valid ONEcard.

The home opener is also the first game on the new turf that was installed at Foote Field earlier this summer. The ACT Global “Xtreme Turf Premier” was installed by Carpell Surface, the same company that installed a similar surface in Montreal’s Olympic Stadium.

Fans will be able to follow the action via the Golden Bears webcast at bears.ualberta.ca, while TSN 1260 radio will also carry the game live and online. TSN 1260 morning show host Dustin Nielson, Golden Bears alumnus Jay Milne and Doug McLean will cover all the action, from pre-game to post-game.

One of the storylines in Regina in week one was Alberta’s “bend but not break” defence. Although the unit yielded just over 500 yards in offence to Regina, they also recorded three interceptions and two sacks, and made critical stops late in the fourth quarter to preserve the win.

Third-year defensive back Tak Landry (science) made back-to-back pass disruptions on Regina’s final two plays of the game, effectively cementing the win for Alberta, while Brandon Foster (business), a fourth-year who was converted from defensive back to strong-side linebacker this season, made a game-changing interception early in the fourth.

With the Rams backed up inside their own zone and the score 22-21 for Regina, Foster hauled down an errant pass by sophomore Regina QB Noah Picton at the Regina 33-yard line.

On the ensuing Alberta possession, rookie quarterback Ben Kopczynski (arts) moved the Bears to the 18-yard line, and then connected with receiver Tylor Henry (physical education and recreation) in the end zone for the game-winning TD.

Kopczynski was the game’s other story as the former red shirt completed 22 of 37 passes for 278 yards and one touchdown, with no interceptions and no sacks against. The Calgary-born QB hadn’t take a game snap since his Grade 11 season due to injury, as he missed his Grade 12 year and then red-shirted for Alberta last season.

The Huskies, meanwhile, are coming off a game they lost, despite leading the contest for the majority of 60 minutes. Saskatchewan had leads of 11-0, 20-7 and 22-14 on Manitoba, but couldn’t secure the win as the Bisons scored 10 consecutive points in the fourth to eke out the 34-28 road win.

Saskatchewan QB Drew Burko completed 24 of a whopping 46 passes for 318 yards and one touchdown, but also tossed four interceptions.

Huskies running back Tyler Chow steamrolled for 107 yards on 17 carries as well, giving the Huskies a total of 407 yards.

Alberta and Saskatchewan met twice in 2014, with the Huskies winning both times, including a thrilling 42-41 overtime victory at Foote Field in last season’s home opener. Alberta’s last win over Saskatchewan dates back to Sept. 25, 2009, when the Bears banked a 27-7 win at Foote Field.