Bears foraging around railways not as common as previously thought 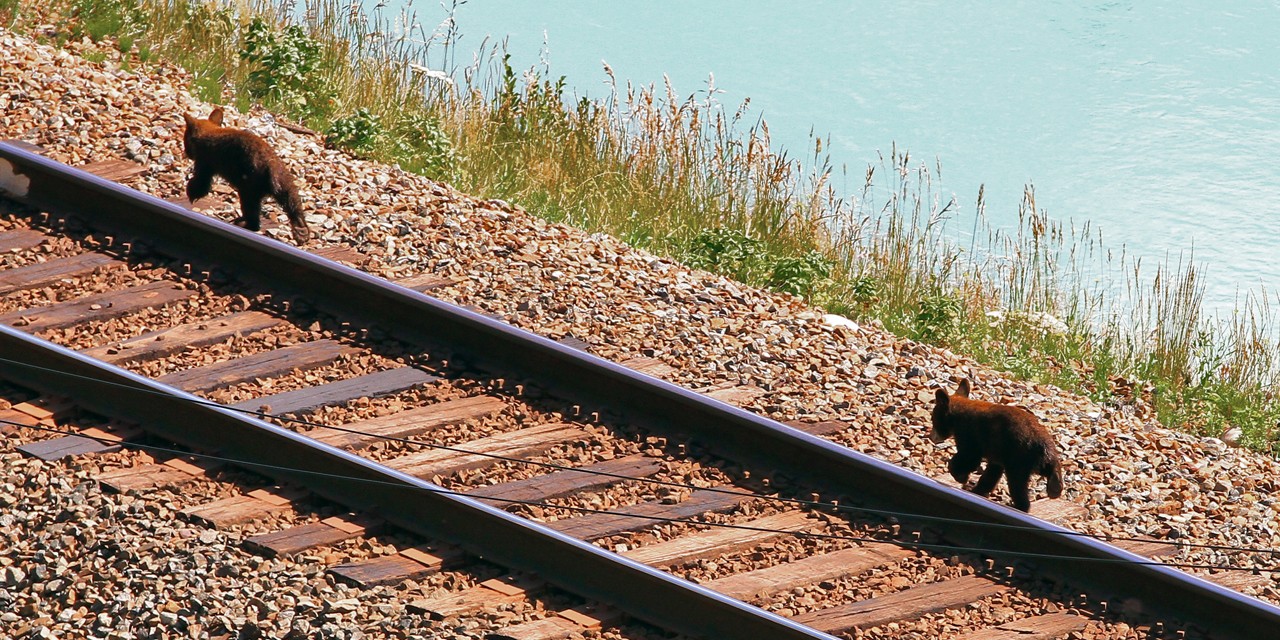 A recent UAlberta study found that less than 20 per cent of bears monitored foraged for food along railways with any regularity. (Photos courtesy Victor via Flickr, CC BY-NC-ND 2.0)

Despite conventional wisdom suggesting that train tracks are the low-hanging fruit of the bear diet, a new study out of the University of Alberta has shown that few bears regularly target the railside for feeding.

Grain that spills from rail cars, carcasses of train-killed animals and vegetation that flourishes in the rail right-of-way are known bear attractants, but less than 20 per cent of bears monitored during a recent study used the rail extensively.

A team of researchers led by biological sciences professor Colleen Cassady St. Clair and postdoctoral fellow Maureen Murray used the GPS data collected by wardens with Parks Canada on 21 bears in Banff and Yoho national parks, and then combined that with hair and scat samples to determine how often bears used the rail and what they ate while doing so.

The study showed that just four of the 21 collared bears used the rail area as often as 20 per cent of the days they were monitored. Those four animals also produced all the bear scats retrieved by researchers that contained grain and could be attributed to individual bears. Scats found within 150 m of the rail were six times more likely to contain nutrient-rich grains, but they were also more likely to contain animal parts such as ungulate hair and ants, and scats with grain contained more types of food.

“Before we did the study, I wouldn’t have expected there to be such low use by most of the bears,” she said. “That is one of the lessons I think we all get. If you have the experience of seeing bears on the tracks, you assume a lot of bears use the tracks, not just a few usual suspects.”

She was also surprised by the apparent diversity of their foraging targets, especially since train strikes have become the leading recorded cause of mortality of bears in the Bow Valley.

St. Clair said rail use was highest among a dominant bruin and three small, young bears. She mentioned that the victims of train strikes are also often young, naive bears.

Why tracks attract still a mystery

Still, the reason why some bears feed alongside railways and most don’t has researchers puzzled.

“One potential reason is railways are a scary place for most bears,” she said. “Another plausible reason is the big bear that uses the rail a lot chases the other bears away. From looking at the GPS records, we think he defends the rail.”

“Bears are attracted to any place where there is disturbance, but it doesn’t have to be the rail, and some are surprisingly far from the rail,” explained St. Clair.

The highest concentration of bears in the entire study area occurred on the Lake Louise ski hill because, according to St. Clair, “It is covered in bear food, including some introduced species that bears really like, which were seeded because their rapid growth prevents erosion.”

She added, “A legacy of human use in the valley, whether it be mining or logging or camping or dumps or trains, also creates a legacy of attraction by bears.”

That being said, St. Clair warned that rail-frequenting bears can also face other dangers in the valley bottom—two of the three teenaged bears who frequented the railway have since been struck by vehicles on nearby highways. Other young bears frequent areas used by people, creating potential for human-wildlife conflict.

To reduce the risk of trains killing the bears, the researchers recommend that managers continue to remove grain and ungulate carcasses from the railway, reduce grain spills from trains and target mitigation on the specific bears and locations that generate high rates of rail-based foraging.

This study is one part of a larger, five-year collaborative research project concerning bear strikes that will produce about a dozen research papers. One of these concerns a device created by Jonathan Backs, another student in St. Clair’s group, to warn bears, and other wildlife, of approaching trains.

“When people hear of a bear strike, it seems it becomes more than a science story, it really tugs on the heartstrings and combines several kinds of issues that are important to society and a university,” she said. “Bears on train tracks in a national park demonstrate political and engineering problems as much as biological or conservation ones.”

She added that wildlife mortality from trains is unlikely to be ever be eliminated but it could be reduced, and done with a smaller ecological footprint than the traditional approach to mitigation of roads—fences.

“That would be colossally expensive, both ecologically and economically.”

The research was supported by Canadian Pacific, Parks Canada, and NSERC. The findings were published in the May edition of the open-access journal PLOS ONE.

Bears foraging around railways not as common as previously thought
Newsroom