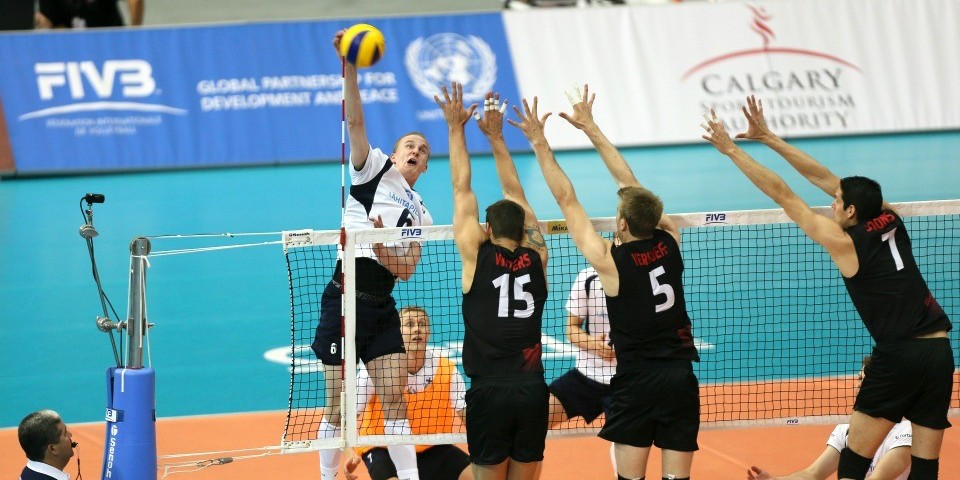 (Edmonton) Fans of University of Alberta Golden Bears volleyball have reason to cheer this weekend, when four members of the vaunted program, including three alumni, will suit up for Team Canada during FIVB World League play at Rexall Place in Edmonton.

Team Canada, ranked 11th in the world, takes on 14th-ranked Australia June 20 and 21, with both matches beginning at 7 p.m. Canada last played at Rexall Place, then known as Northlands Coliseum, in 1984 against the Soviet Union in warm-up games in advance of the 1984 Los Angeles Summer Olympics. Canada also played in Edmonton in 1983 during the Summer Universiade, where they earned a silver medal.

Golden Bears head coach Terry Danyluk played on both the 1983 and 1984 Canadian squads; now, 30 years later, he will be part of the coaching staff for Canada for the first Canadian senior men’s team games in Edmonton since 1984.

Danyluk recently guided the Bears program to its seventh national championship victory—and the acclaimed former player and current coach has been a part of all of them. The native of Tofield, Alta., won a university championship as a player in 1981 and has collected six more as a coach of the program. He began his affiliation with Canada’s national program in 1977, when he was selected to the Canadian junior national team, and continued to represent Canada until 1987, including at the 1982 Commonwealth Games, helping Canada to gold; the 1983 Summer Universiade, which culminated in a silver medal; and the 1984 Summer Olympics, where the team finished fourth.

This weekend, Danyluk joins the Team Canada coaching staff as they push for a pair of critical wins against Australia in World League play. Established in 1990, the FIVB World League is an annual men’s national team volleyball tournament that reaches all corners of the planet, offering millions in prize money and worldwide TV coverage.

Canada competes in Pool C this year, along with 30th-ranked Finland and 37th-ranked Belgium. If Canada wins the group, they will advance to the next round of World League play. Canada has already defeated Finland (3-0 and 3-2), in Calgary on May 31 and June 1, and split with Belgium in Vancouver, winning 3-0 before losing 3-1 on June 14.

Canada’s 1983 silver-medal Universiade team will be recognized at the games in Edmonton as well.

Canada finished fifth overall in FIVB World League play last year, after losing to the eventual champion Russian team in the playoffs after Canada had won its pool. That fifth-place finish saw Canada improve seven spots in the world rankings, jumping from 18th to their current 11th-place position.

Get tickets for matches in Edmonton