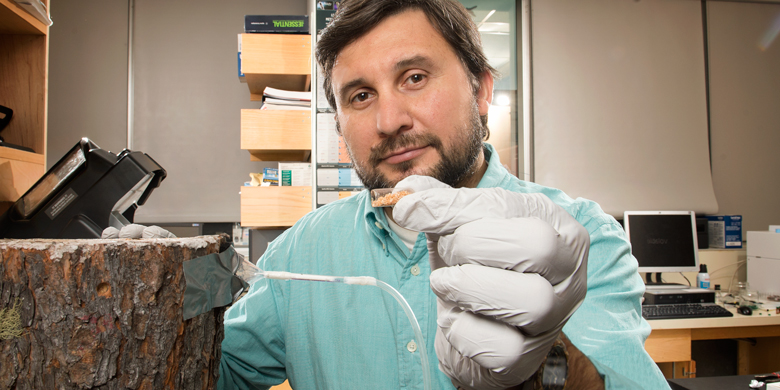 131113-nadir-erbilgin-banner
Nadir Erbilgin with a sampling of mountain pine beetles. Erbilgin and his team are testing a pheromone-based bait to attract and trap the destructive beetles. (Photo: Richard Siemens)

(Edmonton) University of Alberta researchers are closing in on developing an effective bait to get ahead of the destructive spread of mountain pine beetle, which is now killing not only lodgepole pine forests, but also jack pine in Alberta.

Nadir Erbilgin, associate professor and Canada Research Chair in Forest Entomology in the U of A’s Department of Renewable Resources, has been investigating pheromones—airborne chemical compounds that trigger a social response among individuals of the same species—emitted by the pest in North America’s lodgepole and jack pine forests.

The compounds are providing insight into how the beetles swarm in destructive numbers in the Canadian boreal forest, including Alberta. The mountain pine beetle has killed lodgepole pine forests in the Western United States, British Columbia, the Northwest Territories and Alberta and, according to other U of A research, could spread east to the Maritimes.

Newer to the beetle’s list is the jack pine tree, and Erbilgin’s research focuses on developing a bait that can be potentially used to monitor beetle activity specifically in jack pine forests in Alberta and other provinces. Traps with high numbers of beetle catches could indicate the levels of beetle population at a particular site.

“That information may help forest managers decide where to focus their beetle containment efforts,” Erbilgin said.

The eventual goal is to develop a bait for use in a provincial “trap tree” program, in which visual and chemical cues would combine to attract high numbers of beetles. Trap trees are used to concentrate and contain the local beetle population on certain trees in Alberta. The infested trees are then used to assess the beetle population level and removed, along with the beetles.

“The mountain pine beetle is the most damaging forest insect in North America, and climate change has allowed the current epidemic to spread from lodgepole pine to jack pine, a tree species that was thought to be unsuitable for beetle survival in Alberta.”

In fact, the beetle has attacked large swaths of jack pine in eastern Alberta close to the Saskatchewan border, Erbilgin noted.

Erbilgin and his team, which includes associate professor Maya Evenden of the Department of Biological Sciences and several U of A graduate students, spent the summers of 2011 and 2012 testing the efficiency of a pheromone bait “that is showing promise,” he said. The bait, tested in Grande Prairie lodgepole forests, works by attracting the beetles to traps.

Alberta field trials will continue in the summer of 2014, and the hope is to have an effective product developed for use within the next few years.

The U of A team’s work is focused on fine-tuning baits currently being used in jack pine forests, in an effort to get ahead of beetle infestations. “Right now we don’t know how efficient currently available commercial baits will be in catching beetles in jack pine forest, as they were developed to catch the beetle in lodgepole pine forests,” Erbilgin said. Because the trees differ in their chemistry relating to beetle attraction and colonization, differences in beetle responses are to be expected, he added.

“Pheromones are essential for the mountain pine beetle to be able to spread and thrive, so we wanted to explore how we might use that to stop them,” Erbilgin said. The chemical compounds play a key role in the insect’s ability to find a mate and to overcome tree defences.

The U of A study, published recently in New Phytologist, investigated the tree chemical compounds that play critical roles in the beetle’s pheromone production and attraction in both their established lodgepole pine host and in the newer jack pine host.

The study revealed that the beetles emit the same pheromones from both tree species, but researchers found that the females in the jack pine tree emitted more trans-verbenol, a pheromone that initiates the beetle aggregation on host trees. Females lead the first attacks on trees, while sending out pheromone signals for more beetles to join the aggregation.

“Without this initial chemical signalling, the beetles couldn’t aggregate on the same tree,” Erbilgin noted.

Beetle attacks also induce a release of a volatile tree chemical, 3-carene. Field tests conducted by Erbilgin and his team showed that when 3-carene was added to a mixture mimicking the aggregation pheromone, beetle capture in traps increased.

Understanding the role of pheromones in beetle invasion also allows for quicker monitoring of the insect’s activities in jack pine forests, Erbilgin said. “This eliminates the one- to two-year gap in diagnosing beetle-killed stands, which don’t show up until the dead foliage turns red.”

Antiviral used to treat cat coronavirus could hold key to COVID-19: U of A researchers
New drug could potentially offer better treatment for chronic heart failure
U of A health policy expert aims to cure COVID-19 ‘infodemic’
U of A Butterdome to house AHS assessment and treatment centre
How to know if isolation is affecting your mental health, and what to do about it
COMMENTARY || Five key issues facing Canada’s agri-food industry