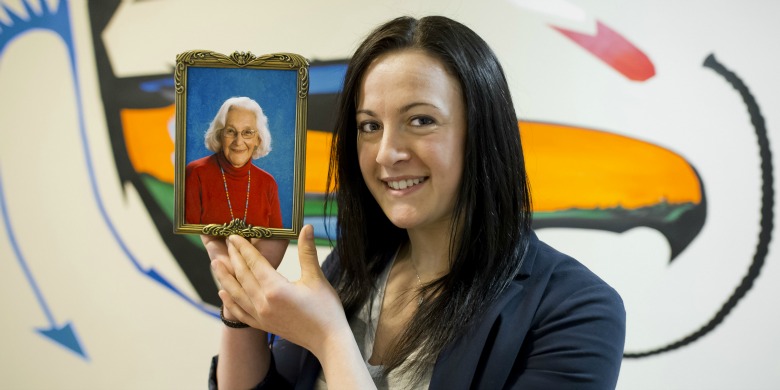 130208-kaylalavallee-margefriedel-banner
Kayla Lavallee holds a portrait of the late Marge Friedel. Lavallee is the first recipient of the M�tis Elder Marge Friedel Award established in honour of Friedel's contributions to the UAlberta community. (Photo: John Ulan)

(Edmonton) When Marge Friedel died suddenly, just as classes were starting in September of 2011, the University of Alberta lost a cherished presence.

Bearing warm bannock bread—usually baked at 5 a.m. the same morning—Friedel would come to the Aboriginal Student Services Centre, as she had for several years, to share time with students, offering comfort and the wisdom of her years. As a Métis elder based at the centre, Friedel, who was 75 when she passed away, was a gentle hub of support for stressed students, many of them far from home and the arms of their own families.

“Marge gave so much to the centre,” said director Shana Dion. “She was here every Wednesday, rain or shine, she never missed a day, she would come in with warm bannock she had made. She was focused on education and on the students’ academic journey. She cared deeply about their success as students.”

Sitting one-on-one with students, Friedel—a silver-haired mother of four, a grandmother and a great-grandmother herself—quietly offered guidance and traditional knowledge that provided strength to a steady stream of students as they grappled with the workload of post-secondary studies.

“She provided a grandmotherly presence to many of our students and she had so much knowledge that they wanted to learn from her. Anyone who ever sat with her would come to the centre with a lot on their plates and when they left, some of that was alleviated,” Dion said.

“She was an amazing spirit and her energy was always bright.”

Besides her quiet dedication to the U of A, Friedel was a member of the Métis Nation of Alberta Elders’ Council and supported higher education as a founding elder of Edmonton’s Amiskwaciy Academy.

In honour of Friedel’s contributions as a U of A community member, the Métis Elder Marge Friedel Award for students was established through donations and has been awarded for the first time to third-year science student Kayla Lavallee.

Lavallee, who plans to study dentistry and is also a captain on the U of A Pandas hockey team, was touched to be the first student chosen for the award. She never met Friedel, but did some research after she won the award, and learned about the beloved elder’s extensive community involvement both on and off campus.

“She seemed like a leader and it’s an honour to receive this award in her name.”

As a diligent student, Lavallee keeps a high grade point average, but still manages to strike a balance playing hockey for the Pandas and volunteering with young patients at the Stollery Children’s Hospital. Deeply connected to her own Métis heritage, Lavallee contributes by playing and coaching high school women’s hockey teams in the Aboriginal provincials each spring.

“It is important for me to celebrate being part of the Aboriginal community. Being Métis is part of who I am and I am proud my family is Métis.”

Lavallee is also proud to be part of the U of A, she added.

“There are so many opportunities here to feel like you are part of something special. I think it’s important to take advantage of being a student and enjoying that experience while here.”

Friedel’s memory will also be honoured at the University of Alberta’s annual round dance, being held today, Feb. 8, in Dinwoodie Lounge. The event runs from 2 to 10 p.m., beginning with a pipe ceremony, followed by a feast at 3 p.m. and the dance, which begins at 5 p.m. Everyone is welcome.