Better family health is in the cards 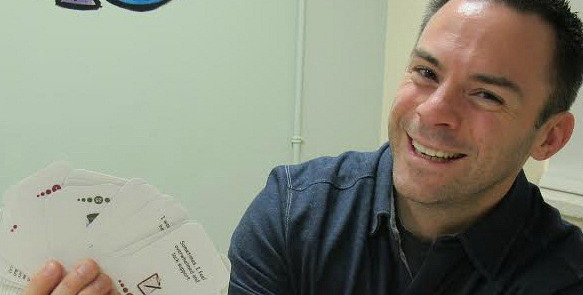 (Edmonton) Out of all his research, Geoff Ball says it is has been his simplest project that has shown the greatest return.

In 2011, Ball, an associate professor in the Department of Pediatrics at the University of Alberta’s Faculty of Medicine & Dentistry, created a deck of cards meant to help parents guide discussions with health professionals about their children’s weight management. Today, that work continues to pay dividends.

Ball’s ongoing research with the CONversation Cards has led to his team being given a best “Great Educational Material” (GEM) award by the Journal of Nutrition Education and Behavior for the 2013–14 paper of the year.

“They thought the idea was novel and the cards might be of use and meaningful, and I think that’s really what most researchers would want,” says Ball.

The cards were created for use in a pilot project in 2012 at the Pediatric Centre for Weight and Health, a weight management clinic at the Stollery Children’s Hospital in which Ball serves as director. They then became available for health professionals in 2013 through a partnership with the Canadian Obesity Network.

The cards contain printed statements reflecting common concerns—such as, “My kids hate fruits and vegetables” or, “It’s tough to stick with an activity program”—for parents trying to address their children’s weight management issues. The goal is to empower parents to help guide the conversation with health professionals.

“We give the cards to families, and ask them to take a few minutes to flip through them and pick four or five that really resonate,” explains Ball. “In a way, it shifts the control to have it be more patient- or family-focused, as opposed to clinicians having their list of questions they’re going to ask and check off, and they might get to the issue that’s important to the families or they might not.”

Though the goal of the CONversation Cards is to better engage families, Ball says the underlying focus remains on achieving better health outcomes. “The more engaged families are, the more involved, the more opportunities they have to make decisions; we know that leads to better adherence to recommendations. It leads to better rapport and trust between health professionals and families.”

According to Ball, the cards are consistent with a patient-centred philosophy of care. They are now used in numerous weight management clinics and primary care clinics across the country, and with the recognition of the GEM award, could soon see more widespread use among health professionals. And the project continues to evolve: Ball says the next step is to work with teens to develop a deck of cards tailored to their issues and concerns.

The project was funded through a grant from the Women and Children’s Health Research Institute at the U of A.

Better family health is in the cards
Newsroom