Overreliance on indoor spaces, lack of accessibility among issues keeping citizens from getting out and enjoying their community year-round. 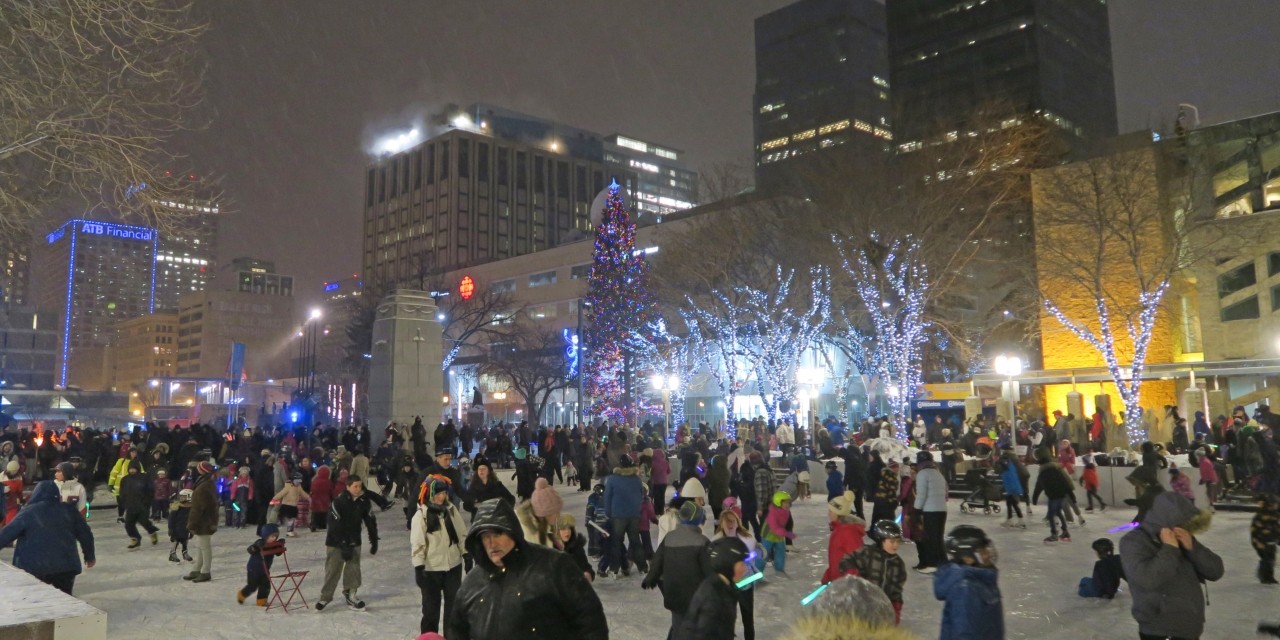 Edmonton's Churchill Square was one of three areas of the city a U of A researcher focused on in a study that showed building design, transit availability and park maintenance are major factors in getting people to embrace their cities. (Photo: Getty Images)

Planning, design and governance of a city play at least as important a role as attitudes in helping convince residents to embrace long, cold winters, says a University of Alberta researcher.

Vanessa Zembal, a master’s student who studied winter spaces, found that big-picture issues like building design, availability of transit and park maintenance play a major part in getting people to embrace their cities, not just in winter, but year-round.

“That’s impacting how people are engaging—or not—with winter. It’s a bigger issue that involves infrastructure. If we just put beautiful winter lights on a building but people can’t get into the building, then the space isn’t as good as it could be.

“We need to be more aware of deficiencies in terms of infrastructure and governance models,” she said.

“People from warmer climates were moving into bitterly cold northern regions and governments came in and built communities, and you saw principles of winter cities start cropping up. They’d build tall apartments as windbreaks and funnel sunshine into courtyards, for instance,” she said.

In the ’70s and ’80s, there was a realization that those ideas could be moved to cities with milder winters, like Edmonton, “but there were differences that were missed,” Zembal suggested.

“We overprotected people. There was no real need for big malls, pedways, underground parking, attached garages and now we have a survival agenda of overreliance on interior spaces.”

That design movement resulted in development formulas that failed to recognize the individual economic, historical and cultural contexts of cities.

“These will vary and in many ways dictate how we might experience a space,” Zembal said. “A steep river valley in Edmonton and a more accessible river elsewhere, like Winnipeg or Ottawa, means that the same solution won't necessarily be as successful.”

For her research, Zembal used Edmonton, which has a WinterCity Strategy focused on changing the public’s negative perceptions about winter.

She conducted walking interviews in these areas with 15 participants and held workshops with maps gathering their feedback about what design features they felt excluded them from enjoying winter and summer outdoors, how they did use the spaces and what features would help them use it more.

Based on their input, she found design issues—ranging from poorly maintained bike paths to a lack of transit access—dampened attitudes even more toward going outdoors in cold weather.

“People are that much less inclined to go outside and experience their community during the winter, and the exclusions can be physical, mental, even financial. There’s a lack of enjoyment based on so many factors beyond winter, and it’s difficult for people to get past that when they are making decisions about what to do and where.

“Unless you are physically able, your winter experience can be difficult. You’re facing questions: can you find and enjoy the resources provided by the city in terms of things like winter festivals, can you pay fees, do you know how to dress for winter and what activities are out there? These are all big things that affect inclusion,” she said.

Focusing on networks within and around a city like good transit connections and pathway systems is also important, she noted. Some of Edmonton’s best winter attractions, such as Hawrelak and Rundle parks, are not directly related to public transit.

“There’s a need to create physical infrastructure between destinations, because then it wouldn’t be so much of a burden to find the exciting parts of a city, where you can walk for an hour and see and experience different things,” she said.

“When we focus attention on one theme, such as winter or inclusion or age-friendly, we can potentially ignore the bigger picture that lets us look at how we can improve a city for the summer and the winter. If we decide to create a nice destination that can be used year-round, we aren’t restricted to talking about reducing wind and increasing sun exposure.”

Though it’s a huge task to change how cities govern and plan their infrastructure, Zembal believes it is doable, starting with smaller changes like promoting neighbourhood skating rinks and tweaking services like public transit.

“Getting to know about the sorts of barriers that might exist is a time-consuming and sometimes difficult process, but can lead to much more successful designs in terms of use and enjoyment.”