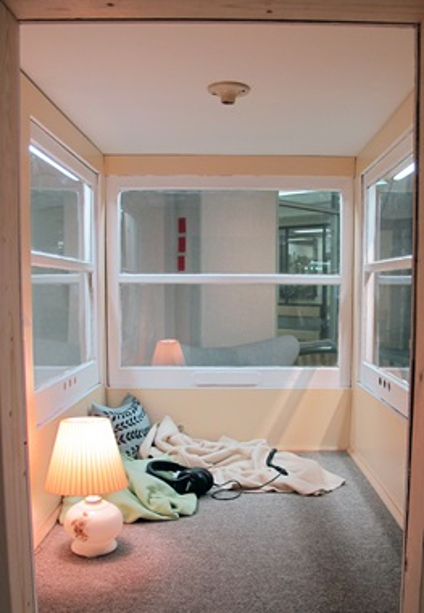 The sculptures from "Retreat" reflected comfortable spaces for patients who were spending their lives between their homes and hospital rooms.

Between art studios and hospital corridors: a different look into medicine

Bradley Necyk’s innovative work not only gives a different approach to physical and mental health through arts, but made him the recipient of a CIHR grant.

Bradley Necyk with one of his sculptures from 'Retreat', his latest exhibit at McMullen Gallery.

What does an artist do walking around the hospital wards? In the case of Bradley Necyk, he is giving a groundbreaking perspective to the Faculty of Medicine & Dentistry’s health research.

Necyk, master of fine arts and also a drawing and intermedia professor at the University of Alberta, stands as a pioneer by merging his background with his current work as a candidate for a master’s degree in psychiatry.

This unusual journey began with his thesis for the MFA. “The topic I chose was mental health—specifically psychiatry and pharmaceutics, how it works, how people engage with it and how it affects your subjectivity when the way you think is shifted by these chemicals as they are added into your central nervous system,” he explains.

His own experience with bipolar affective disorder made much of his artwork autobiographical and fuelled his interest in medical topics. His pieces eventually caught the eye of Friends of University Hospitals (Friends of UAH) and he was invited to be part of its very first artist-in-residence program in 2015, in collaboration with the U of A Hospital’s Transplant Services.

The Arts & Humanities in Health & Medicine (AHHM) program’s director, Pamela Brett-MacLean, saw potential in Necyk: why not get an arts professional to delve into psychiatry and combine the two fields? She encouraged him to take a graduate study program to leverage his interest. Andrew Greenshaw, professor of psychiatry and chair of graduate studies at the time, agreed with her.

“It was so wonderful that he just completely understood why an artist should be in a medical department, doing research alongside the very rigorous evidence-based medicine,” adds Necyk. “He and Dr. Brett-MacLean saw the importance of having somebody else taking another look at medicine, and specifically psychiatry.”

The understanding of patient experiences from an arts perspective opens new possibilities for physicians to improve care and treatment. For Necyk, this "shared empathetic learning" is a powerful space to create and disseminate knowledge. “Art is an affective mapping of systems and experiences,” he says. “It forms communities of understanding and new clinician-patient interactions occur that will hopefully lead to better care.”

The relevance of this novel approach was also acknowledged by the Canadian Institutes of Health Research, which provided a grant to fund his research for 12 months.

Both of Necyk’s most recent artistic projects are based on the work he has been doing with transplant patients and mark the end of his residency.

Retreat, his art exhibit at the hospital’s McMullen Gallery until the end of April, was a collection of sculptures and drawings inspired by his experience with their patients’ perspectives. One of them was also a poet and described the “retreat” where he would be while he had to wait for news on his transplant, a calm place to which he was forced because of his health. “I wanted to make these sculptures that reflect the comfortable space that you might retreat to when you’re ill,” explained Necyk.

The sculptures also represented the transition patients spend between their homes and their hospital rooms, taking elements from both places to feel comfortable.

Necyk also worked with Edmonton artist Kyle Terrence to create a fiction film called Alberta. It was motivated by his powerful conversations with transplant patients and donors’ families at the hospital. 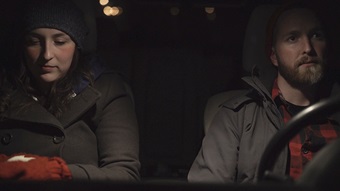 “There was one mother, whose husband had committed suicide when their children were very young,” says Necyk. “She was telling me how her daughter is now an adult and she was trying to get to know her dad, realized they liked the same things and wondered what it would have been like to have this relationship with her father being both of them adults. That really resonated with me, among other stories.”

The film strongly addresses the topics of death and suicide, something the artist hopes will spur discussions among viewers with their friends and family. “It’s something we should not shy away from,” he says. “I hope it makes people more aware if someone is going through something difficult and if that person has suicidal tendencies—or even themselves.”

“It might get others to see they’re not alone in those ideas or feelings and that maybe there is help they can get.”

Alberta had one screening in April, and Necyk plans to schedule more through film festivals and online distribution.

The future of art in medicine

Necyk’s involvement in the field of medicine is rare, but he hopes it marks the start of a new wave of arts-health professionals and researchers discovering new approaches to study and improve patient care. This year, he worked with Brett-McLean as a curator for the Patient Immersion Experience exhibit. Currently he works with the School of Dentistry on a project called “Creation and Patient-Oriented Research: Exploring Patients' Experiences of Head and Neck Cancer.”

“The work that I am doing right now, I hope, is a place where the experts—clinicians and researchers—can meet ‘lived experience experts’—the patients—and empathetically learn together.”

Necyk will be giving a presentation on “Contemporary Art and Mental Illness” at Grand Rounds in June, analyzing artists who have taken on the topic of mental illness in their work. “It will be a very different Grand Rounds event,” he says, laughing.

Between art studios and hospital corridors: a different look into medicine
Newsroom