Beyond the architecture of assimilation 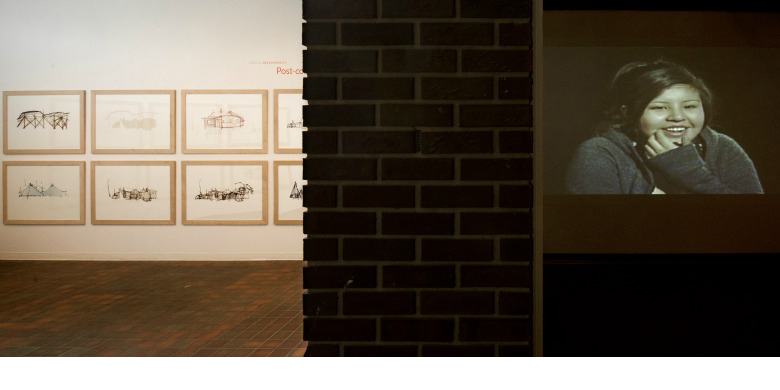 (Edmonton) It’s not unusual that patrons of an art show come away baffled about the artist’s intentions. But the current show at the University of Alberta’s FAB Gallery leaves little room for confusion.

In this case, the artist, Gavin Renwick—new Tier 2 Canada Research Chair in art and design, and the country’s only current Canada Research Chair in design studies—is using Counterpoint: The Aesthetics of Post-Colonialism to answer some of the most daunting questions he’s been grappling with since he left his native Scotland more than 15 years ago for Northern Canada. He came to investigate a claim that architecture is not benign, but is a fundamental part of a colonial enterprise. His search took him to Yellowknife, N.W.T., where his attention has been focused ever since.

With some pieces in the multimedia show constantly changing, and with a studio for Renwick right in the middle of it all, audiences are guaranteed never to have a repeat experience at this exhibition. Take “Where Extremes Meet,” for example. What began as a virtually blank canvas has been transformed by patrons into a multicoloured piece, replete with brushstrokes as different as their responses to Renwick’s question on the piece, “How do we indigenize Canada?”

Renwick says that through these sorts of questions, the show tries to create a dialogue between Canada and the Aboriginal world.

Architecture in the fourth dimension

Another question Renwick explores is how to design a building that responds to time, which he calls the fourth dimension of architecture. An evolving answer to that question is a miniature structure he is designing as part of the show, which will become a cultural facility in the Sambaa K’e community in the Northwest Territories.

“It will help promote and sustain their cultural community, a place for dialogue with their youths and elders, and members from other communities,” he says.

While Renwick was in Yellowknife for his PhD research, Dene elders approached him with a proposition. “They wanted someone who could help articulate their cultural idea of home, so that was my original work. My PhD went off in a tangent, as well as my life, and that took me to where I am now.”

In Dene languages, Renwick explains, there is no distinction between inside and outside space; there’s just the idea of a homeland. “How as an architect do you begin to work with ideas that don’t create that barrier between inside and outside space?” he says. “What I’m working on now is a series of structures that are intrinsically flexible, that will be utilized and occupied differently, and even physically look different, from season to season.

“So, for example, a structure might open up in the summer and close up in the winter, integrating the fourth dimension into architectural design: time.”

'An expansive approach to design'

He says the show’s dynamic nature is consistent with its title, which aims to create dialogue. “There’s no equality in the dialogue between Canada and the Aboriginal world. So in one sense this exhibition is a small attempt to create some degree of parity in the dialogue between these two worlds,” he says. “The gallery is a visual metaphor for my working method. As I sit and develop buildings for the communities, I can make reference to all this work in the gallery and I can talk to people about why and how I’m using it, and why it’s such an expansive approach to design.”

The dialogue, Renwick says, is about land claim and identity. “Aboriginal people maintain their sense of cultural continuity and identity despite Canada, not because of Canada,” he says. “Canada—and I speak here as a voluntary immigrant myself—is the only country in the world that has a policy of multiculturalism, but that doesn’t work if you’re Aboriginal. Everyone else can be multicultural, whereas the Aboriginal world exists to be assimilated. So how do we get beyond that? How do we include the Aboriginal world within that multicultural project? That interests me.”

It’s here that he’s using his design skills, knowledge of Aboriginal cultures and trust built over decades to use architecture, which he says has been a tool for assimilation and colonization, to help the Deh Cho people he works with to build culturally appropriate structures.

“Modernity to these people was largely the period of colonization and assimilation, so it’s a tainted term, it’s a tainted project. How do we make that leap from a traditional and holistic relationship to community, to post-modernity to post-colonialism, which this community is trying to do?”

The answer to that, he says, is hybridity—to “take traditional environmental knowledge and combine it with contemporary design practice with environmental technologies to create something that’s stronger for them and for Canada,” he says. “We largely see sustainability as a technological issue. Their idea of sustainability is much more holistic. It has to do with community wellness, cultural continuity and living with some degree of empathy with the eco-system.”

The show has been a big success. “There have been well over a thousand people in this gallery, and I’ve talked to virtually every one of them,” Renwick says, adding that the turnout is contributing to a richer understanding of the North.

“I realized that, as opposed to wilful ignorance, it’s actually just been lack of information. And when you give people information in a positive and visually seductive way, in a way that brings people in, as an act of communication, they respond and do well. There has been a myriad of followup questions. It’s been useful for me to be here.”

The show runs until Oct. 13 at the FAB Gallery.

Beyond the architecture of assimilation
Newsroom