Big aspirations in the Big Apple

Business grad Rochelle Estoque is off to live her dream in New York after landing a job in real estate. 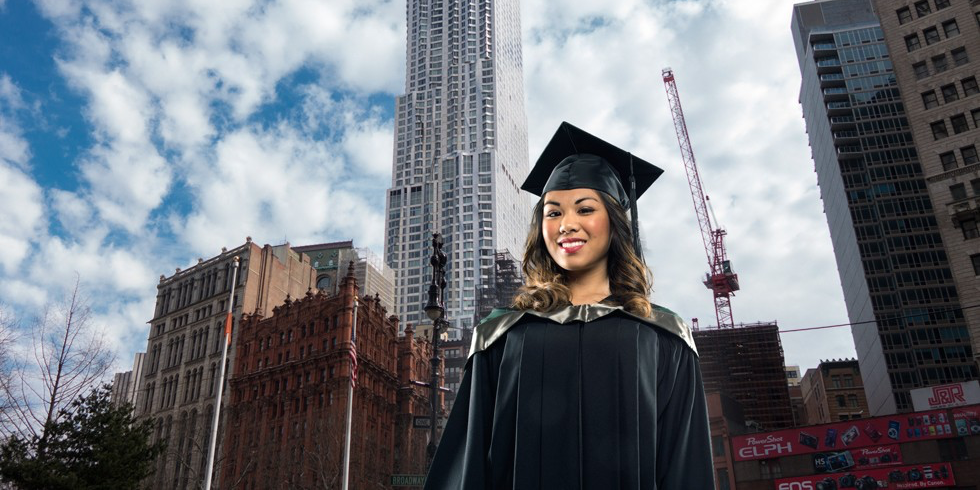 (Edmonton) The Big Apple plays a starring role in some of the most popular movies and television series of recent times, but as far as business graduate Rochelle Estoque is concerned, it’s about to assume the most important role in her life.

After years of hard work and dedication, Estoque is about to realize her long-held dream of living and working in New York City after landing a lucrative job with a fast-growing Canadian-based commercial real estate company.

“There were many opportunities offered by the University of Alberta that have contributed to making this all possible, most importantly the support and encouragement of professor David Dale-Johnson, who was able to connect me with contacts in New York, although it was up to me to make things happen,” said the enthusiastic Estoque, who graduates June 9 with a bachelor of commerce degree with distinction.

“It is surreal to think that I am going to be living there, but I have worked extremely hard for this and I understand in the ‘real world’ I will have to dedicate even more long days and plenty of sacrifices to succeed in the big-city business climate,” said Estoque.

She is not at all fazed at the prospect of living away from home permanently for the first time in an overwhelming city that offers unlimited opportunities—and a place where one could possibly succumb to the pressures of life. “I think while movies and TV series portray life as glamorous, I know from my short experience in the city that it can be challenging,” she said. In 2013 she spent four months in NYC working as a financial intern for Avison Young, so she has had a taste of what she is in for the long term.

Says Dale-Johnson, who specializes in real estate at the Alberta School of Business, “I think it takes a lot of confidence and a willingness to step outside one’s comfort zone to work and succeed in New York.”

“Rochelle was going to NYC for a School of Business finance/investment trip in 2012 and asked me to suggest some real estate firms that she might try to visit while she was there. Her extra effort turned this opportunity into a reality,” he added.

When it came to manifesting that extra effort, Estoque’s determination to get to NYC knew few boundaries. “I always understood that to stand out from others you need to be proactive and put in the extra effort, even if it meant pulling all-nighters to prepare for meetings and exams.  Fortunately I am a night owl, so that is one advantage I have moving to the city that never sleeps,” she said.

“I had a quote put on my business card which now sounds a little cheesy,” she laughs. "'Success is not final, failure is not fatal, it is the courage to continue that counts.'" But for Estoque, it sums up the approach that has helped her realize her dream.

Big aspirations in the Big Apple