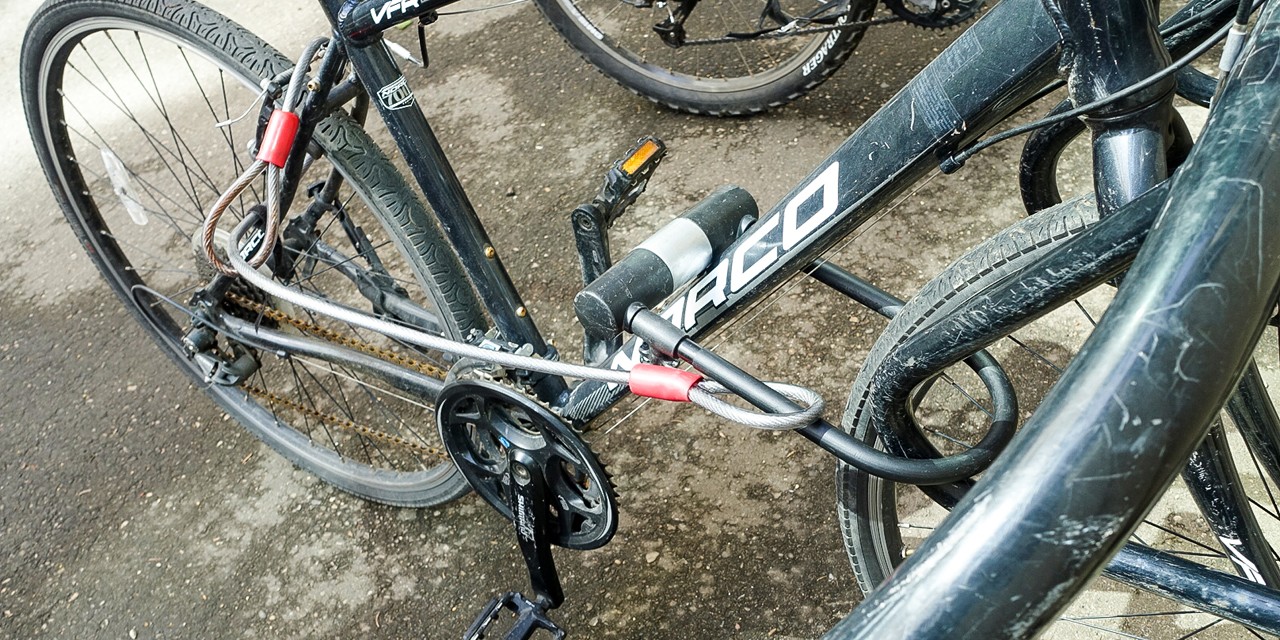 A visual audit of all bike racks and cages on campus found that 63 per cent of cyclists locked up their bikes with U-locks, 19 per cent used cable locks or chains and 14.5 per cent used a combination of a U-lock with cable. (Photo by Bryan Alary)

The University of Alberta is partnering with the city to launch a new bike theft prevention pilot program that, if successful, could eventually roll onto other Edmonton streets.

“Bike theft is an issue that people need to take more seriously, especially as citizens turn to alternate modes of transportation,” said Connie Marciniuk, a community safety liaison with Edmonton’s Neighbourhood Empowerment Team, a partnership between the city, Edmonton Police Service, Family Centre and United Way. “Our goal is to create a climate where cyclists feel more confident that their bikes are safe. The easiest way people can do this is by using a quality U-lock and securing your bike properly.”

Data about bike thefts is one of the reasons the U of A’s north campus was chosen as the pilot location. In other parts of the city, bike thefts are lumped in with other theft or break-and-enter incidents; at the U of A, Protective Services (UAPS) logs the date, time and location of thefts, along with the type of bike and bike lock used.

Bike thefts up 248% on north campus

Protective Services noticed a 248 per cent spike in bike thefts over the past four years on north campus. In 2016, 72 bikes or bike parts were reported stolen, up from 58 the year before. Already in 2017, there have been 14 reports of stolen bikes or parts.

Peace officer Stephanie Hartwig said the increase in thefts corresponds with a greater number of students and staff who commute to campus by bike. Unfortunately, not enough cyclists are taking the right precautions to deter thieves.

“Every year when they buy a bike, they think they can buy a $20 cable lock or $30 cable lock for a $1,000 bike instead of what they should be using—a U-lock, preferably in combination with a cable or second lock,” Hartwig said.

Her team and the Office of Sustainability just completed a visual audit of all bike racks and cages on campus and found that 63 per cent of cyclists locked up their bikes with U-locks, 19 per cent used cable locks or chains and 14.5 per cent used a combination of a U-lock with cable.

But even a U-lock doesn’t guarantee a bike won’t be stolen, particularly if it’s not used properly. In the audit, nearly a third of bikes with U-locks were not secured properly. In some cases, only a tire was locked to a rack or just the frame was locked. That makes it possible to steal a tire, particularly if the bike has quick releases, which thieves can easily match up with other improperly locked parts, Hartwig said.

UAPS will be on hand to demonstrate proper bike locking techniques at the U-Cycle launch event Tuesday in Celebration Plaza by the Administration Building. UAPS will be giving away 50 U-locks to cyclists who register at Tuesday’s U-Cycle launch. That’s in addition to more than 200 Project 529 registrations that UAPS and the Neighbourhood Empowerment Team will give away. A single pack registration kit and tamper-proof sticker normally costs $10.

High visibility areas not a deterrent to theft

In terms of choosing the best place to lock your bike, even highly visible locations are not a deterrent to thieves. HUB Mall and Edmonton Clinic Health Academy saw the highest number of reported thefts, which Hartwig said can occur in a matter of seconds.

“What it boils down to is people minding their own business. If someone has a cable lock or a chain, it’s a quick snip and off they go,” Hartwig said.

Despite the rise in thefts, the university is not seeing a surge in demand for bike cages on north campus. Hartwig said they are “horribly underutilized,” which is a shame because they add an extra layer of security and typically safeguard bikes from the elements too.

Marciniuk said her team will be working with the U of A to see what impact U-Cycle has on bike thefts after the year-long pilot, with a goal of spreading it to other post-secondary campuses and other parts of the city.